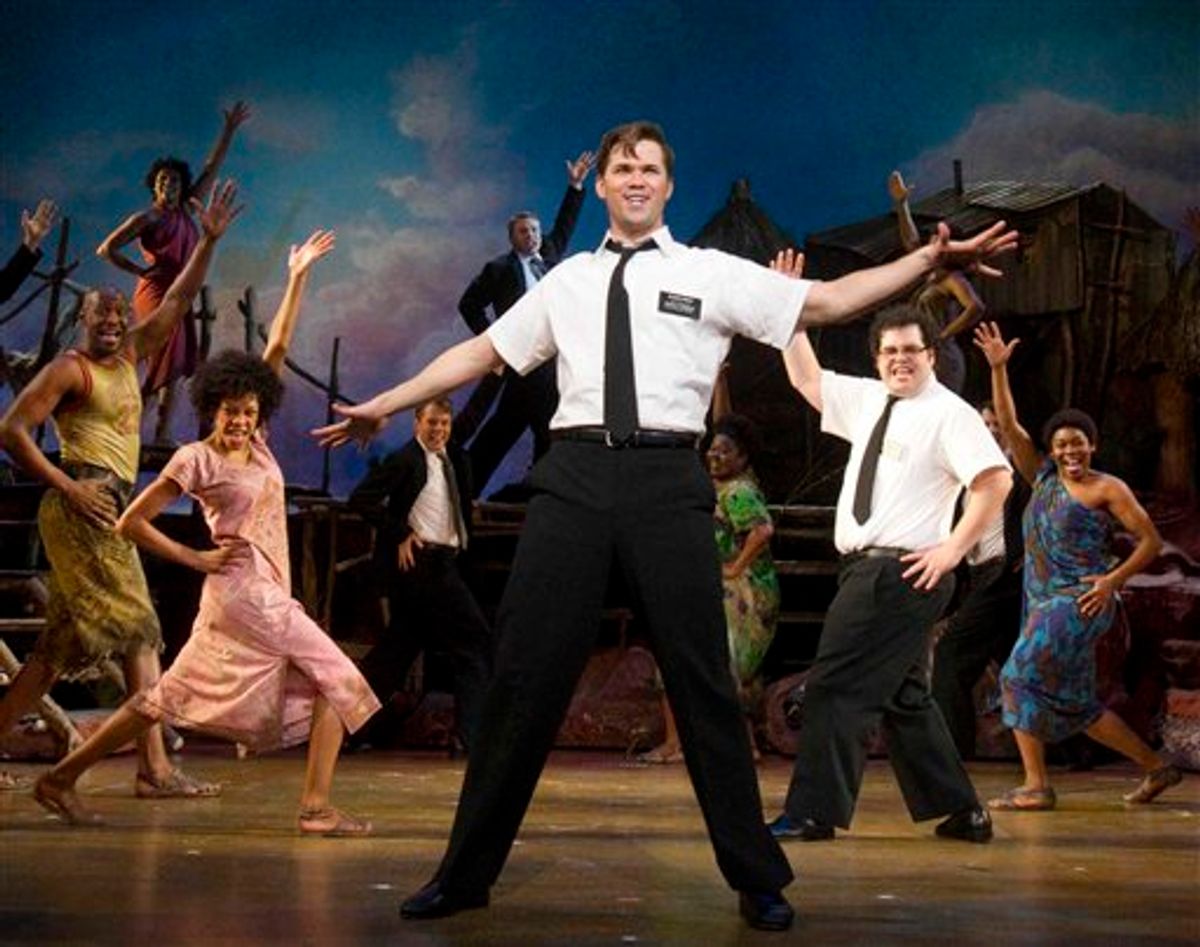 In this theater publicity image released by Boneau/Bryan-Brown, Andrew Rannells, center, performs with an ensemble cast in "The Book of Mormon" at the Eugene O'Neill Theatre in New York. (AP Photo/Boneau/Bryan-Brown, Joan Marcus) (AP)
--

When the Broadway season began last year, a big brash musical about Spider-Man was supposed to muscle its way to multiple Tony Award nominations. Instead, a pair of goofy Mormons may be the ones to beat.

The musical, about two Mormon missionaries who find more than they bargained for in Africa, was written by Trey Parker and Matt Stone, the creators of "South Park," and Robert Lopez, co-creator of the Tony Award-winning musical "Avenue Q." The trio teamed up with Casey Nicholaw, who co-directed with Parker and choreographed.

It has received 12 Drama Desk Award nominations, six Outer Critics Circle Award nominations and a Fred & Adele Astaire Award nomination, which recognizes excellence in dance. The musical is also grossing more than $1 million a week and is selling out -- the place "Spider-Man: Turn Off the Dark" was supposed to be before its implosion.

"The Scottsboro Boys," a searing tale of 1930s injustice framed as a minstrel show, received 12 nominations, including best musical, best book of a musical, best original score as well as a leading actor and two featured actor nods.

Among others who earned nominations were Al Pacino, who played Shylock in "The Merchant of Venice," Vanessa Redgrave in "Driving Miss Daisy" and Sutton Foster for "Anything Goes."

"There's absolutely nothing cookie-cutter about this season," said Charlotte St. Martin, executive director of the Broadway League, which jointly produces the Tony awards with the American Theatre Wing. "The theme is that there is no theme."

It is also shaping up to be a lucrative time for Broadway, with total box-office grosses already at more than $987,057,484, or 3.6 percent more than the same time last year. Attendance this season is at over 11.4 million, up 3 percent from this time last year.

The awards will be handed out June 12 at a new location: the Beacon Theatre on the Upper West Side of Manhattan after producers lost their long-term space at Radio City Music Hall. It will be broadcast live by CBS.