The week that Obama trumped The Donald

The stature gap between the two men just ballooned 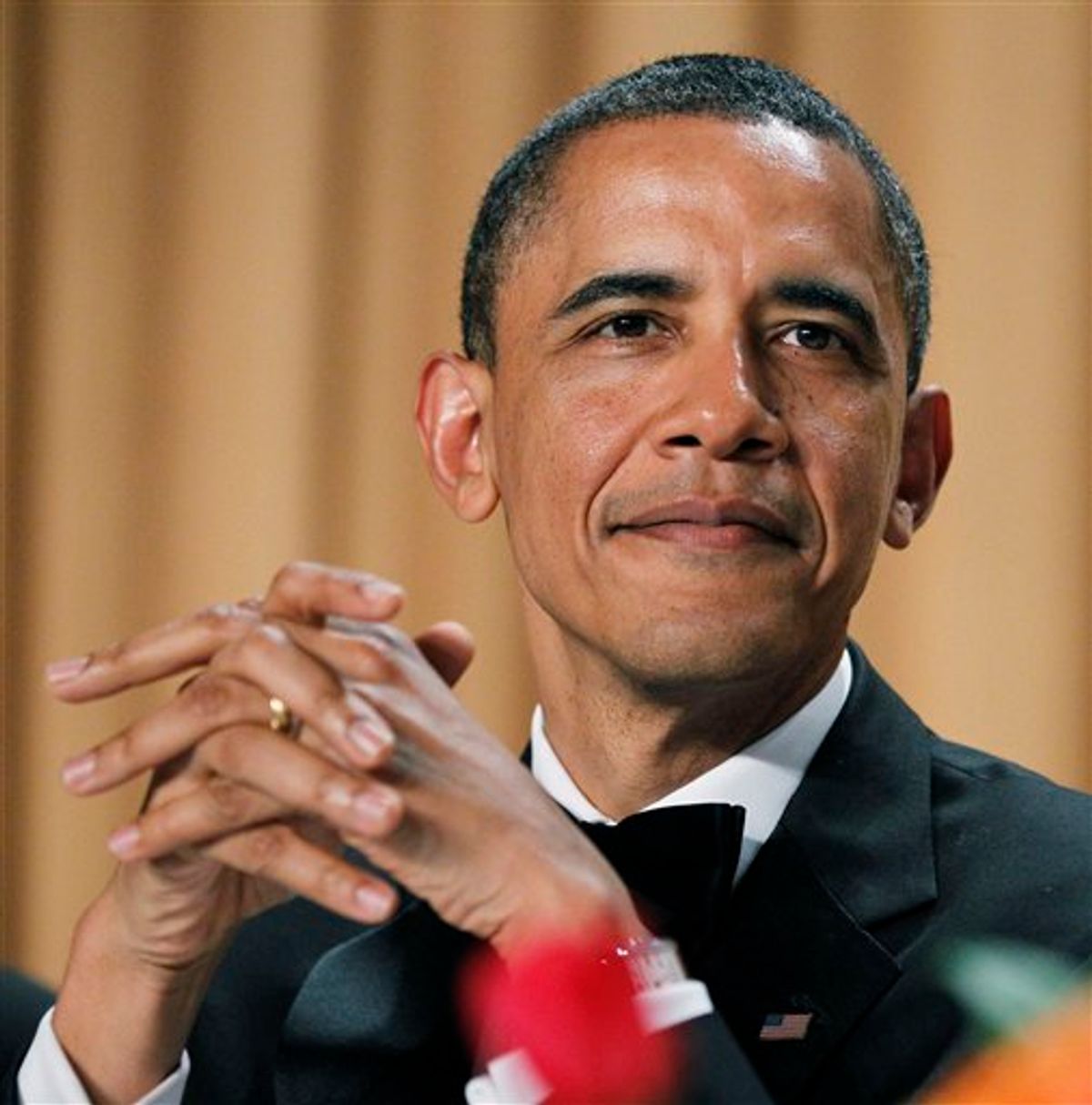 FILE - In this April 30, 2011 file photo, President Barack Obama attends the White House Correspondents Association Dinner in Washington. In a remarkable 36 hours of his presidency, Barack Obama carried a momentous secret and gave no hint of it as he consoled tornado victims, delivered a college commencement address and cracked jokes at a black-tie dinner. (AP Photo/Manuel Balce Ceneta, File) (AP)
--

This has been the kind of week that makes news junkies wig out in a frenzy of adrenalin and information overload while driving to distraction people who try to write weekly pieces like this one.

Just when you think you’ve got a topic nailed down and sit down at the keyboard to sweat it out -- bam! -- along comes another headline that diverts your attention and dropkicks all your plans out the window.

One thought had been to go the semi-frivolous route and write something about the Royal Wedding -- all that costly pomp and circumstance signifying nothing, the anachronistic irrelevance of monarchy in a 21st century democracy -- or maybe my search for the hollow tree where elves make those Whoville hats worn by some of the guests.

I might even have confessed that my former wife and I, married the same summer as Prince Charles and Princess Diana, spent part of our London honeymoon standing in line to see their wedding gifts on display at St. James Palace, an array of conspicuous consumption that ranged from priceless china, crystal and silver to a Megamix food processor, two hand-knit ski caps and an assortment of tea cozies.

But then there was the president’s release of his "long-form" birth certificate, confronting those who insist he was born in Africa and confirming what most of us have suspected all along. Dear God, he’s an American!

While to some a Honolulu hospital may seem as foreign and faraway as the moons of Jupiter -- remember, this remains a country where less than a third of the population has a passport -- Hawaii is indeed one of these United States, even if they do sell exotic delicacies like Spam with rice and eggs at the local McDonald’s.

In fact, as reported by the New York Times, Hawaiians consume more Spam than any other Americans, a habit that dates back to World War II. If I were to write a whole piece about this I’d note that there are more varieties of Spam sold in Hawaii than anywhere else, including Spam Garlic, Spam Bacon, Spam with Cheese, Spam with Tabasco, Spam Turkey and Spam Lite (Monty Python fans: Insert gratuitous Spam joke here).

But I digress. You have to observe with some bemusement that not so long ago, there were Republicans campaigning for a change in the Constitution that instead of denying access would have allowed foreign-born citizens -- Henry Kissinger or Arnold Schwarzenegger, to be precise -- to become president. But of course, those two are white Europeans (and it’s a little-known fact that Kissinger, like Arnold, has won the Mr. Olympia bodybuilding title an incredible seven times).

I’m guessing that none of those same Republicans would have challenged whether Henry K. had grades good enough to get into Harvard, where he received his B.A., M.A. and Ph.D. Which brings us to Donald Trump, who not only embraced the racism of the birther movement but also sought to rouse the prejudices of affirmative action haters by demanding to see Obama’s academic records, implying that he did not have the grades for Columbia and Harvard Law School but was admitted solely because of his skin color. ("I heard he was a terrible student, terrible. How does a bad student go to Columbia and then to Harvard? … I have friends who have smart sons with great marks, great boards, great everything and they can’t get into Harvard.")

All of this was ample fodder for a column, too, but President Obama and "Saturday Night Live’s" Seth Meyers so deftly and surgically skewered Trump at Saturday night’s White House Correspondents’ Dinner that a piece devoted to the Trumpster suddenly seemed superfluous. Meyers especially lobbed zinger after zinger while The Donald silently sat there at the Washington Post’s table as grumpy-looking as Sam the Eagle on the old Muppets show. (Ever the class act, Trump told Fox News afterward that Meyers' delivery "frankly was not good. He’s a stutterer…")

By Monday, though, Trump was suggesting a moratorium of several days on "debating party politics," using a call for patriotism as a diversion, diving for cover behind the successful killing of Osama bin Laden, memories of 9/11 and the women and men of the military -- trying to avoid for a while at least the media attention he usually covets. Suddenly, comparisons are odious, especially to one whose vitriol and bullying, "You’re fired!" management style stack up so unfavorably when held up against what White House counterterrorism advisor Jack Brennan described as "one of the most gutsiest calls of any president in recent memory."

For in the end, the story of the week was those Navy SEALs on the ground in Pakistan whose 40-minute firefight eliminated the man who epitomized the horror of worldwide terrorism. In the weeks and months to come, whether his death changes anything, whether it shortens war or makes America safer or eases the anti-Islam xenophobia that so diminishes us, that will be something to write about.