In a Washington Post column, Asif Ali Zardari insists his country "did its part" to help "silence" bin Laden 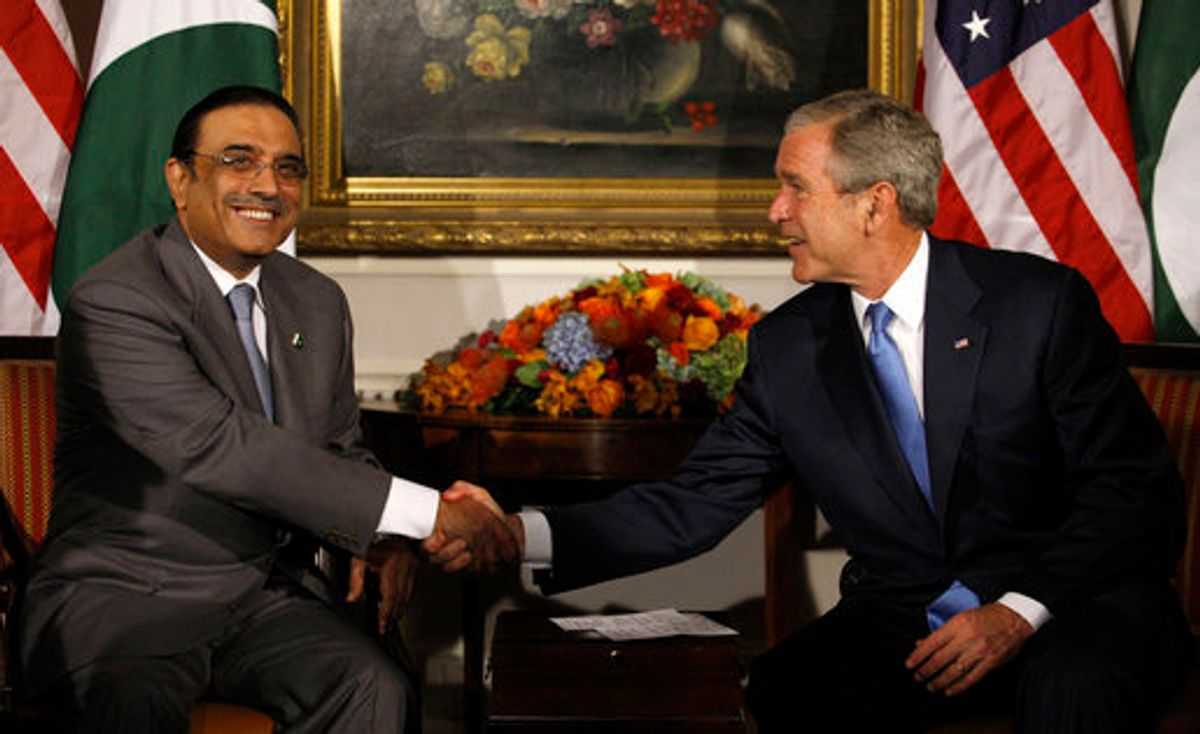 Claims that bin Laden was "hiding in plain sight" -- with the implication that it would have been impossible for him to survive for so long had the Pakistani state not been aware of his whereabouts -- have been rife. Zardari has done his best to quell them, and today his defense became more aggressive as he hit out at critics with a Washington Post opinion piece.

Calling Pakistan "perhaps the world's greatest victim of terrorism," the president expressed his "satisfaction that the source of the greatest evil of the new millennium has been silenced, and his victims given justice" -- adding that bin Laden "was not anywhere we had anticipated he would be."

Endorsing Obama's Sunday night remarks, but acknowledging that the attack on bin Laden's Abbottabad compound was "not a joint operation," Zardari stressed the personal nature of his relief:

"[F]or me, justice against bin Laden was not just political; it was also personal, as the terrorists murdered our greatest leader, the mother of my children. Twice he tried to assassinate my wife [former Pakistan Prime Minister Benazir Bhutto]. In 1989 he poured $50 million into a no-confidence vote to topple her first government. She said that she was bin Laden’s worst nightmare — a democratically elected, progressive, moderate, pluralistic female leader. She was right, and she paid for it with her life."

Pakistan's former president Pervez Musharraf, by contrast, called the the U.S. raid a "good military action" but a clear "violation" of Pakistan's "sovereignty":

Suggestions that the Pakistani state may have had a greater awareness of bin Laden's location than Zardari has admitted have come from many sides. Chief White House counterterrorism officer John Brennan, for example, claimed at a press briefing Monday that it was "inconceivable that bin Laden did not have a support system in the country that allowed him to remain there for an extended period of time."

Politico also notes that Michigan's Carl Levin, the chairman of the Senate Armed Services Committee, has "sharply questioned ... whether the Pakistani military and intelligence community had protected Osama bin Laden." Levin told reporters: "I think the Pakistani army and intelligence have a lot of questions to answer -- the location, the length of time and the apparent fact that this facility was actually built for bin Laden and it’s close to the central location of the Pakistani army."

For her part, Secretary of State Hillary Clinton -- despite having had choice words for Pakistani anti-terrorism efforts in the past (discussing the whereabouts of senior al-Qaida leaders in 2009, she said, "I fid it hard to believe that nobody in [Pakistan's] government knows where they are and could not get them if they really wanted to") -- insisted on Monday that "cooperation with Pakistan helped lead us to bin Laden and the compound in which he was hiding," claiming that the Middle Eastern country had "contributed greatly to our efforts to dismantle al-Qaida."