What did bin Laden say in his will? 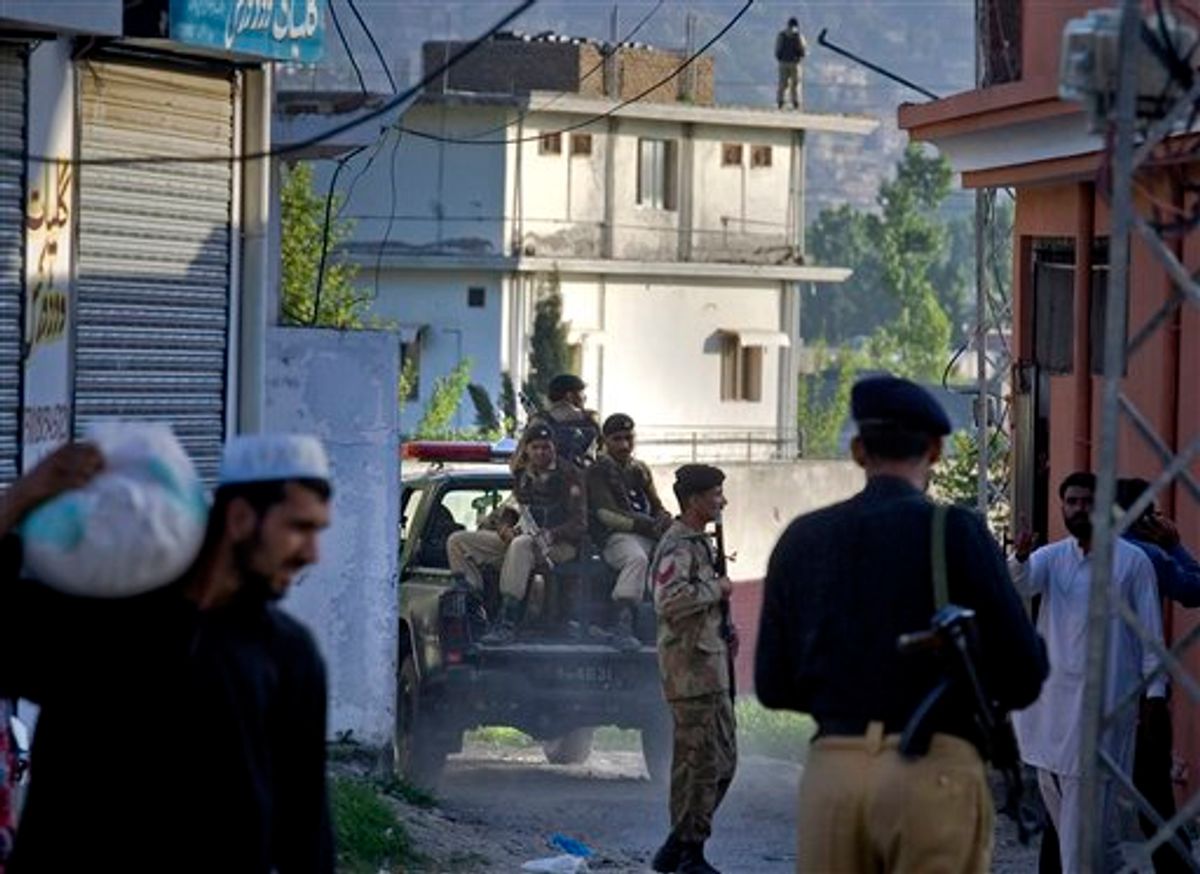 Pakistan army soldiers and police officers patrol past house, background, where it is believed al-Qaida leader Osama bin Laden lived in Abbottabad, Pakistan on Monday, May 2, 2011. Bin Laden, the mastermind behind the Sept. 11, 2001, terror attacks that killed thousands of people, was slain in his hideout in Pakistan early Monday in a firefight with U.S. forces, ending a manhunt that spanned a frustrating decade. (AP Photo/Anjum Naveed) (AP)
--

It hasn't even been 72 hours since word leaked of Osama bin Laden's killing, and our domestic political debate and international outlook are changing rapidly. Here's what's new this morning:

Although the scramble to get the facts straight about the U.S. raid in Abbottabad is hardly over, it hasn't taken very long for the debate to turn to one of the key issues in the "war on terror": the use of "enhanced interrogation tactics," such as waterboarding, to obtain information. Objections to the use of "torture" in interrogations helped fuel Obama's victory in the 2008 presidential campaign, and were brought out repeatedly by liberals hoping to tarnish George W. Bush's war-hawk reputation.

The first question on many people's minds this morning seemed to be: Whether or not they constituted "torture," did these interrogation tactics even work? Did they help us find bin Laden?

The New York Times's verdict is "no". The paper insists that "harsh" interrogation techniques (such as waterboarding) "played a small role at most" in the location and elimination of the terrorist leader:

One detainee who apparently was subjected to some tough treatment provided a crucial description of [bin Laden's] courier, according to current and former officials briefed on the interrogations. But two prisoners who underwent some of the harshest treatment -- including Khalid Shaikh Mohammed, who was waterboarded 183 times -- repeatedly misled their interrogators about the courier’s identity.

Salon's Glenn Greenwald agrees that the useful information harvested from enhanced interrogation tactics was probably minimal, but goes further to argue that it doesn't matter whether or not the information helped:

Even if it were the case that valuable information were obtained during or after the use of torture, what would it prove? ... It makes no difference whether [using torture] extracted usable intelligence. Criminal, morally depraved acts don't become retroactively justified by pointing to the bounty they produced.

Osama would have had to be naked to "surrender"

White House counter-terrorism chief John Brennan made waves when he told Fox News that the Navy SEALs who descended on bin Laden in Abbottabad would have had to be sure the terrorist had no "hidden weapon" before they accepted his surrender. The Los Angeles Times concludes that this means the death of bin Laden in his compound was "all but assured," even before the mission began:

After saying Monday that the American operatives who raided the Pakistani compound had orders to capture Bin Laden if he gave himself up, U.S. officials Tuesday added an important qualifier: The assault force was told to accept a surrender only if it could be sure he didn't have a bomb hidden under his clothing and posed no other danger. ...

Added a senior congressional aide briefed on the rules of engagement: "He would have had to have been naked for them to allow him to surrender."

Politico broke the news this morning that bin Laden had 500 Euros in cash, along with two phone numbers -- but no weapons -- concealed in his clothes when he died. The money and contact numbers apparently indicate that bin Laden was ready to leave Abbottabad at the drop of a hat; in a classified briefing for members of Congress, CIA director Leon Panetta said bin Laden clearly trusted that his contacts would give him "a heads-up" if an American attack was imminent.

In a four-page document published by Kuwait's Al-Anbaa newspaper and believed to be his will, the al-Qaida leader instructs his two dozen offspring to avoid the type of holy war to which he devoted his life. "I have chosen a path fraught with dangers and endured hardships, disappointment and betrayal. If it wasn't for betrayal, things would be different today," he writes, adding: "[F]orgive me if I failed to devote more of my time to you since I answered the call to Jihad."

The Guardian does note that there's a possibility the will is fake:

Al-Anbaa does not reveal how or when it obtained the will or whether it was able to authenticate it. Al-Majallah, a Saudi-owned Arabic magazine, published a similar document in 2002 but it was dismissed as a fraud by a pro-jihadi website.