Happy Foot/Sad Foot has captured the imagination of David Foster Wallace, Jonathan Lethem and others 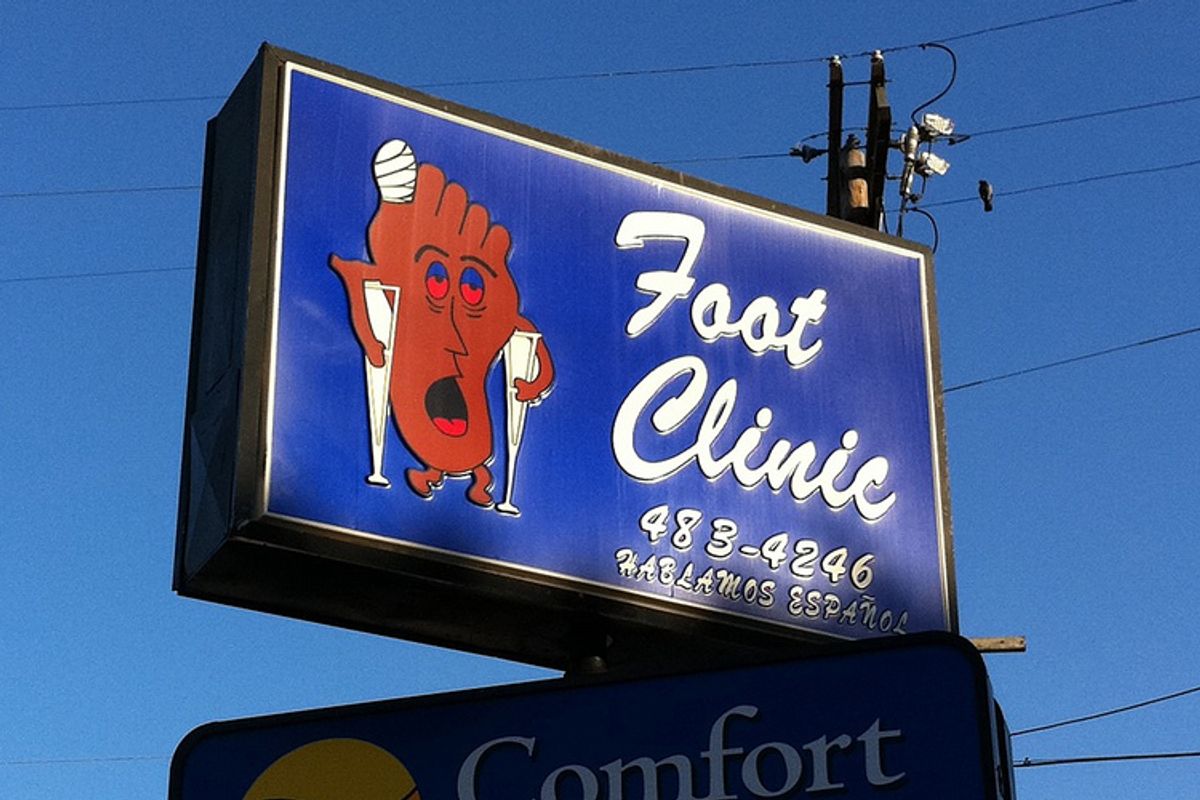 F. Scott Fitzgerald's generation had its green light at the end of the dock in "The Great Gatsby," that symbol of unattainable dreams, and today's young literati have -- a podiatrist's sign?

The sign for the Sunset Foot Clinic on West Sunset Boulevard in Los Angeles is known to some locals as a kind of fortuneteller. On one side is depicted a foot with a woeful face, a bandaged big toe and crutches, while the other side shows an ecstatic foot in gloves and sneakers giving the thumbs-up sign. (Yes, these feet have both arms and legs.) When the sign is working, it rotates, and several residents of the nearby Silver Lake and Echo Park neighborhoods believe that whichever side they see first indicates what sort of day awaits them. Others use the sign as a guide: If they see the Happy Foot, they get to do something fun, while the Sad Foot condemns them to an afternoon of chores.

The Happy Foot/Sad Foot sign became better known to readers outside the Los Angeles area when it appeared in Jonathan Lethem's 2007 novel, "You Don't Love Me Yet." In that book, the main character, a musician named Lucinda, can see the sign from the window of her apartment: "The two images presented not so much a one-or-the-other choice as an eternal marriage of opposites, the emblem of some ancient foot-based philosophical system. This was Lucinda's oracle: one glance to pick out the sad or happy foot, and a coin was flipped, to legislate any decision she'd delegated to the foot god."

The sign also appears to have inspired a passage in "The Pale King," the final, unfinished novel by the late David Foster Wallace, published last month. Wallace relocates the sign to Chicago and changes its appearance somewhat, so that one side depicts the name and telephone number of the podiatry clinic while the other features "a huge colored outline of a human foot." As in "You Don't Love Me Yet," aimless young people -- in this case, college students who can see the sign from their dorm room -- use the rotation as a "wheel-of-fortune" to determine the evening ahead, depending on which side is facing them when the sign is turned off at the end of the day. "If it stopped with the foot facing our windows," the narrator explains, "we would take it as a 'sign' (with the incredibly obvious double-entendre) and immediately blow off any homework or supposed responsibility we had."

In an eerie coincidence, Lethem, formerly of Brooklyn, N.Y, is now the Roy E. Disney Professor of Creative Writing and Professor of English at Pomona College in Claremont, Calif. -- the same position Wallace held when he died in 2008. He doubts that Wallace ever read "You Don't Love Me Yet," given the major depression his predecessor was wrestling with when it was published. Instead, he believes that they were both inspired by local legend.

"When I was researching my novel," he said, "I visited L.A., and at one point I was driving down Sunset Boulevard with someone who'd agreed to be a source on the area. I laid eyes on the sign, and asked about it, and that's when the Happy Foot/Sad Foot lore was unfolded for me. I was aware when I used it that I was keying into a Silver Lake meme -- a non-Internet meme, that is. Later, a friend met a guy who had a Happy Foot tattoo, and got a photo of that for me."

The sign has also been immortalized in a song by the Eels, "Sad Foot Sign" (bemoaning one of the increasingly frequent occasions when the sign is broken and therefore no longer rotating), and in a short animated video, "Happy Foot vs. Sad Foot." The musician Beck is also rumored to believe in its divinatory powers, and locals have been known to dress up in foot costumes for Halloween.

The sign's literary legacy would appear to be rather more exalted, however, and -- who knows? -- it could even achieve the cult, in-joke status of the "Wilhelm scream," a sound effect that has been inserted into hundreds of movies by puckish sound editors since it was first recorded in 1951. Of course, it's a lot easier to slip a brief yell into a cacophonous soundtrack without calling undue attention to the thing; casually introducing a rotating podiatry sign into any novel set in L.A. is a taller order. Lethem, when asked if he would like to see other Angeleno writers rise to the challenge and find a way to work the bipolar anthropomorphized feet into their fiction, said, "It would be nice to see it become universal."