Not so fast! Obama still hasn't shaken the Carter syndrome

Memo to the president: In 1980, the economic disasters were at least as damaging as the foreign policy debacles 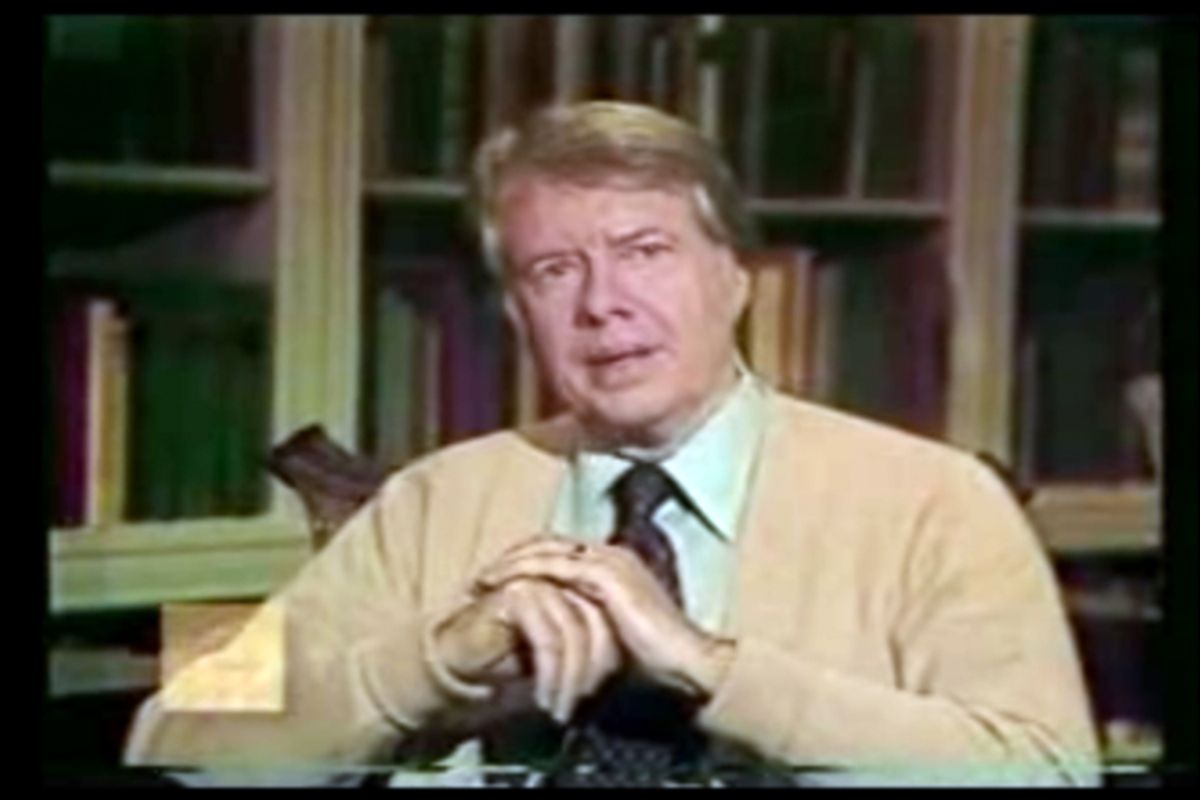 Jimmy Carter in his famous "moral equivalent of war" fireside chat in 1977.
--

"It's Official: Barack Obama is not Jimmy Carter," writes William Dodson at the New Republic. The Navy SEAL operation in Abbottabad, Pakistan, was "America's Entebbe," declares Peter Beinart in the Daily Beast, referring to the 1976 hostage rescue carried out by Israeli commandos at a Ugandan airport. Obama has "defied the Jimmy Carter caricature the right delights in," observes Salon's own Steve Kornacki.

These favorable (to Obama) comparisons are not without merit. Operation Eagle Claw, the failed attempt to rescue the Americans held hostage at the U.S. Embassy in Iran in April 1980, marked one the low moments in American military history. A sandstorm rendered three helicopters unable to function, and another crashed into a C-130 transport aircraft during the hasty evacuation, killing six servicemen. The debacle undoubtedly contributed in some part to Jimmy Carter's failure to win reelection later that year. Carter didn't personally pilot those helicopters, but his legacy has been stained with the embarrassment ever since.

The contrast with how history is likely to regard Obama's role in killing Osama bin Laden couldn't be sharper. The president took a big risk, and it paid off. In the short run, his poll numbers are already up sharply, and in the domain of foreign policy and national security, conservative critics have suddenly lost their footing.

But let's not get carried away with the Carter comparisons quite yet. There's  still plenty of room for Republicans to hang the Carter albatross around Obama's neck. The disaster in Iran wasn't the only reason that 1980 was an awful, awful year for Jimmy Carter. There was also the not-so-trifling matter of an economy running completely off the tracks.

From mid-1979 to early 1980, gas prices rose 60 percent. By March inflation was surging at a ridiculously high rate of 18 percent. GDP growth fell by an astonishing 10.2 percent in the second quarter, unemployment spiked to 8 percent in the summer, and the bond market completely freaked out over a bigger-than-expected government budget deficit.

As Jimmy Carter stepped before the television cameras in the East Room of the White House last Friday, his task was not just to proclaim another new anti-inflation program but to calm a national alarm that had begun to border on panic. Inflation and interest rates, both topping 18 percent, are so far beyond anything that Americans have experienced in peacetime -- and so far beyond anything that U.S. financial markets are set up to handle -- as to inspire a contagion of fear. Usually confident businessmen and bankers have begun talking of Latin American-style hyperinflation, financial collapse, major bankruptcies, a drastic drop in the American standard of living.

Two months before the presidential election, the economy easily trumped international affairs as the primary concern for voters, wrote W. Carl Biven in "Jimmy Carter's Economy: Policy in an Age of Limits."

Reagan was not elected in 1980 because he was viewed as strong by the public in terms of solving the Iranian crisis. When respondents were asked to choose the candidate "best able to handle the Iranian situation" in a poll two months before the election, only 33 percent selected Carter, an unsurprising result; on the other hand, only 39 percent selected Reagan. But the challenger hit a sensitive nerve when he asked voters during a campaign debate whether they were better off than they were four years before. It was not Iran but inflation and unemployment that were the uppermost concerns in the minds of voters. Asked in the same survey two months before the election to identify the "most important problem facing the nation," 61 percent named "the high cost of living," while only 15 percent chose "international problems."

The parallel with Obama doesn't work perfectly: We've already had our financial collapse, major bankruptcies and dramatic standard-of-living drop. So-called core inflation -- which excludes food and energy prices -- is safely under control. So far, the bond market is shrugging off government deficits that make Carter-era numbers seem ludicrously small, and unemployment is falling instead of rising. But we still shouldn't be quite so quick to consign the Carter-Obama comparison to the ash bin of history. The economy will tell the tale of Obama's presidency, and right now, poll respondents think the country is headed in the wrong direction.

Unfortunately for the current occupant of the White House, our economic challenges can't be solved by merely sending in an elite group of Navy SEALs, despite the pretensions of buffoons like Donald Trump, who told a Las Vegas audience that he would solve the problem of rising gas prices by telling Saudis "you're not going to raise that fucking price!" That's a nice sentiment, but falls short in the area of actual implementation. Any military attempt to force Saudi Arabia's hand would, of course, throw the entire Middle East into utter chaos and likely spark the worst oil shock of all time.

Bivens summarizes a Theodore H. White observation to the effect that "in the Carter years, inflation and the hostage crisis were not unconnected in the minds of voters. The psychological effect on voters was similar; they both contributed to the same sense of helplessness. We couldn't free the hostages and we couldn't stop the inflation."

Obama's future prospects depend in large part on whether voters feel similarly helpless about their economic status in the next 18 months. One could ask: Why doesn't Obama apply the decisiveness he devoted to Osama bin Laden to economic policy? But Obama's challenge is that changing the economic status quo is hard, both because global economic trends are difficult to affect through government levers, and because government itself doesn't work very well. Getting 60 votes in the Senate is much more formidable than getting past the obstacles presented by a walled compound in Pakistan.

But still, when Obama declared during his deficit reduction speech that he would refuse to extend Bush's tax cuts for the wealthy ever again, he sounded like the kind of guy adamant enough to launch a risky military operation; whether he has the courage to actually go through and back up his tough talk as an election campaign comes down to the wire in 2012 remains to be seen. His budget negotiation strategy with Republicans smacks a lot more of appeasement than it does ruthless decision-making in the national interest. Has he ever stared across the table at Mitch McConnell and John Boehner with the same gimlet-eyed glare that he demonstrated in the now iconic photograph showing the president and key staff members receiving updates on the Osama raid in the White House situation room? If not, why not?

If unemployment continues to fall and Obama steers his way through the endless budget showdowns without driving the economy back into recession, he has an excellent chance of getting reelected. But all those chest-pumping pundits who think the execution of Osama bin Laden has exorcised all the Democratic nightmare of Jimmy Carter ineffectiveness will be surprised to see how fast the comparisons come back if 2012 proves to be anything like 1980.