Or: An exploration of Dick Cheney's recent daydreams 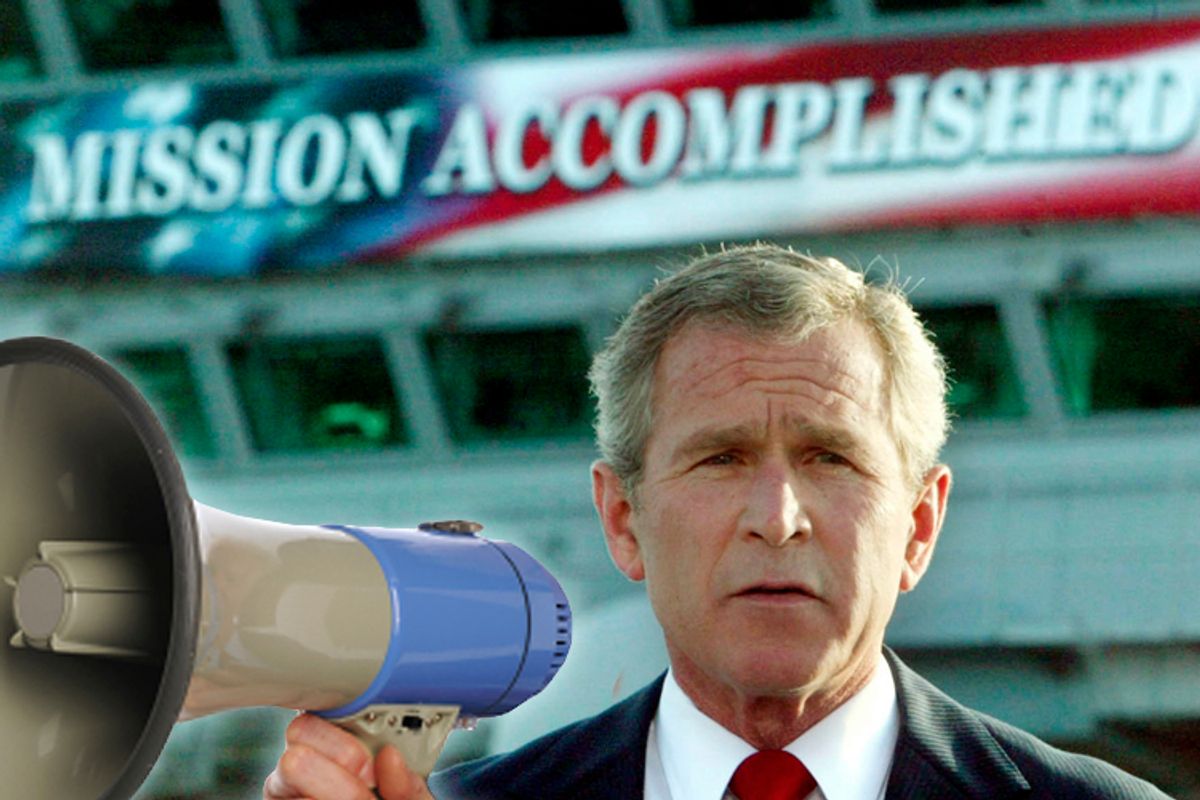 The White House said on October 29, 2003 that it had helped with the production of a "Mission Accomplished" banner as a backdrop for President George W. Bush's speech onboard the USS Abraham Lincoln to declare combat operations over in Iraq. This file photo shows Bush delivering a speech to crew aboard the aircraft carrier USS Abraham Lincoln, as the carrier steamed toward San Diego, California on May 1, 2003. REUTERS/Larry Downing/FILE KL/GN/GAC (Â© Larry Downing / Reuters)
--

President Bush announces the news to the nation on May 24, 2006, immediately following the East Coast airing of the finale of "American Idol." He appears in military fatigues and, for some reason, spurs. Behind him, an oversize Osama bin Laden "Wanted" poster, with the word "LIQUIDATED" stamped on the terrorist mastermind's face. The camera pulls back to reveal that the president's East Room audience is in fact made up entirely of firefighters. The Marine band plays "Stars and Stripes Forever" as the president speaks, forcing Bush to address the room, and the nation, through a bullhorn.

"America has won the war on terror," Bush shouts. "Tonight, I am proud to say, Osama bin Laden is in hell." The president explains that the terrorist mastermind was "taken out" by American forces in Afghanistan, along with the entire senior leadership of al-Qaida. Crowds spontaneously gather in celebration outside the White House, with handmade signs ("THESE COLORS DON'T RUN," "LET'S ROLL") in plain view of cable news cameras set up beforehand according to a White House communications office suggestion. A professional-quality sound system blares Lee Greenwood. Then, fireworks.

Thrilling night-vision footage of a daring firefight in a labyrinthine cave is immediately provided to news channels. All of them air it, without noting that the video was edited by the Pentagon prior to release, and its contents unconfirmed.

In background briefings to national security journalists, the Pentagon credits the kill to one lone unnamed but slightly Schwarzeneggerian special forces officer acting on intelligence procured by one lone unnamed but remarkably Jack Bauer-like CIA officer who personally "interrogated" the al-Qaida courier until he revealed bin Laden's whereabouts.

One senior administration official speaking on deep background reveals the courier was interrogated instead of monitored and trailed because of credible intelligence indicating an imminent attack -- possibly biological or nuclear -- on an unknown American landmark.

Files on bin Laden's captured cellphone reveal him to have been in constant communication with al-Qaida in Iraq leader Abu Musab al-Zarqawi, according to a Pentagon source.

Editorial writers at most major U.S. newspaper proclaim a second moment of harmony to rival the first one directly after 9/11. Once again, there are no Republicans and Democrats, just Americans.

The following day, the president flies to New York where he gleefully models a profane anti-Osama T-shirt sold by a ground zero-area vendor. The photo makes the front page of the New York Post under the headline "LAST LAUGH." Bush proclaims a "National Day of Celebration" and gives everyone the following Monday off from work.

The Guardian notes that British Ministry of Defense officials cannot confirm any details of the Pentagon's story.

Newsweek magazine puts Donald Rumsfeld on the cover, naming him "Washington's King of the Comeback." (Time goes with a write-around feature on the American Commando.) To combat Rumsfeld's sudden popular resurgence, Condoleezza Rice aide Jim Wilkinson instructs Washington Times editorial page editor Tony Blankley to ask Secretary Rice whether the death of bin Laden makes her more likely to mount a presidential run in 2008. Rice's demurrals do nothing to end gleeful cable news speculation that she'll run against Hillary (and win) in 2008. Chris Matthews can barely contain himself.

Mainstream journalists join a chorus of Republicans and right-wing commentators in jeering and mocking liberals casting doubt on the official story of bin Laden's death. Those with reservations, based on actual evidence, about the official story are compared to Truthers by Richard Cohen, Joe Klein, Michelle Malkin, Andrew Sullivan, Mickey Kaus and just about everyone else.

A month later, a BBC investigation reveals that bin Laden's death cannot be confirmed and the entire story as presented to the American media was most likely false. The American press, reluctant to "politicize" the death of bin Laden in the face of overwhelming national support for the president, is very cautious in reporting "new information" out of Afghanistan.

Well after the 2006 midterm elections, leaked memos prove that high-ranking U.S. military commanders warned the White House that the story that OBL had died in a U.S. raid was false and the rumors of his death elsewhere were still unconfirmable.

The next year, a book reveals that the crowd outside the White House the day of the announcement was made up mostly of off-duty Republican congressional aides, lobbyists and political consultants. (None of the firefighters present were from New York.)

In 2007, the Washington Post's ombudsman and managing editor agree that printing the inaccurate story provided to them by administration officials was the right thing to do. "Each piece had multiple, credible sources," the M.E. explains, naming none of them.

"We may never know the full truth about the 'death' of Osama bin Laden," Time magazine writes shortly after a Senate committee investigation into the administration's exaggerations and falsehoods is unable to issue a final report due to a partisan split. While "it seems certain that media accounts of the mission were distorted," the liberal bloggers and foreign news outlets that exposed the distortions are almost certainly "guilty of exaggeration themselves," with their claims that the Pentagon "manipulated information."