The Fox News-ification of Donald Trump 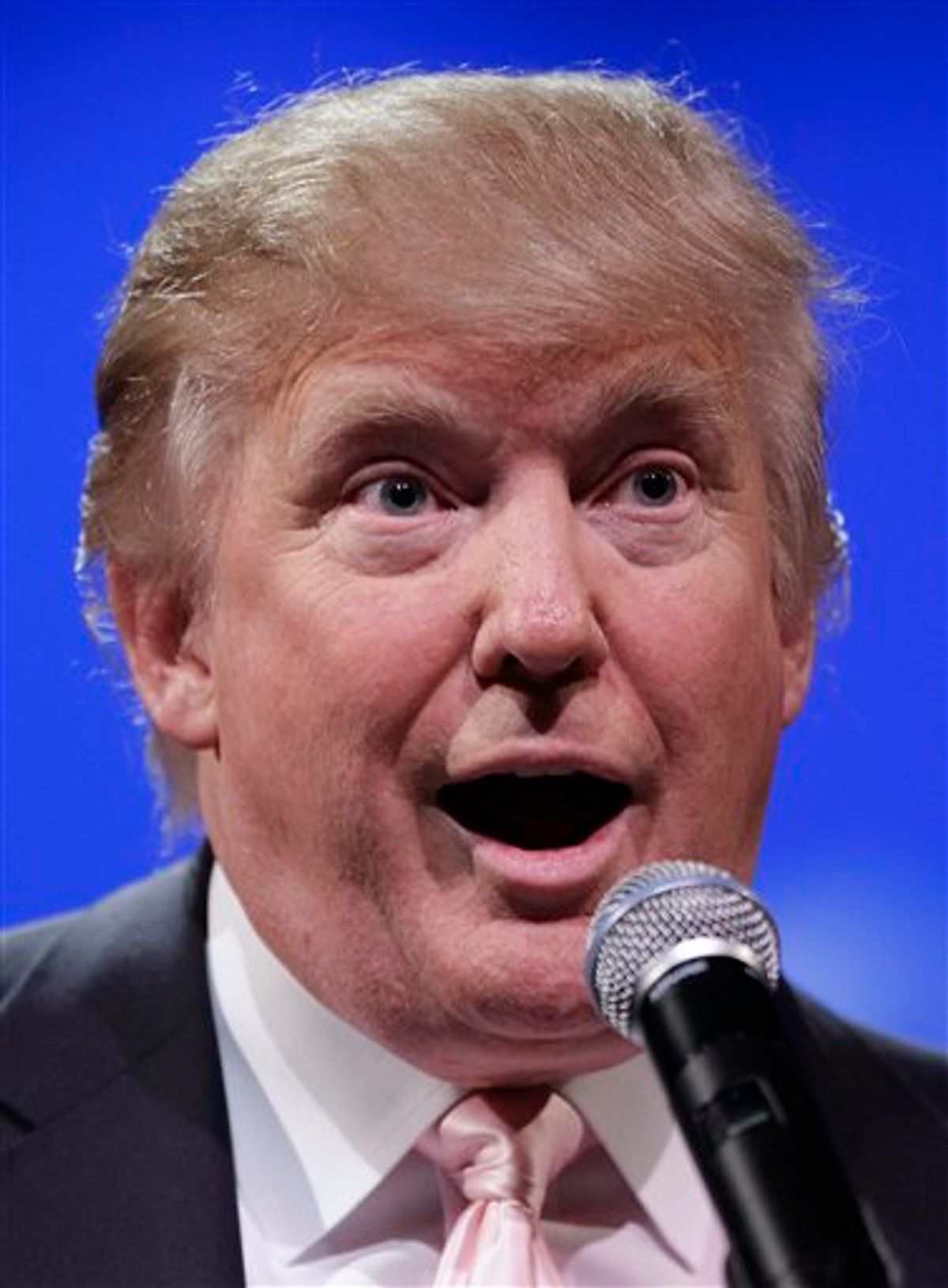 Donald Trump speaks to a crowd of 600 people during a gathering of Republican women's groups, Thursday, April 28, 2011, in Las Vegas. Trump's flirtation with a White House bid continued Thursday night with a lavish reception at the Treasure Island casino in Las Vegas.(AP Photo/Julie Jacobson) (AP)
--

The Donald Trump that most Americans knew for the past two decades or so would have been a logical pace car driver for the upcoming Indianapolis 500, the ceremonial role that organizers recently asked him to play.

He was America's premier businessman-celebrity, a real-life version of Gordon Gekko -- cocky, boastful, and obnoxious, but almost completely non-political. The controversies he'd stir were more the stuff of "Access Hollywood" -- calling Rosie O'Donnell a "pig," for instance -- than "Meet the Press."

When the old Donald Trump sounded off on politics, it was usually to settle a score with some New York or New Jersey politician who'd caused trouble for his real estate business or casino empire. To the average "Late Show" or "Regis and Kelly" viewer, this was just idle noise. Even his fake presidential campaign in late 1999 and early 2000 was a down-the-middle affair, with Trump bashing both parties and pretending to run as an independent, generally steering clear of specific policy pronouncements (and embracing positions with broad popular support when he was pinned down). The character he was playing was "successful businessman outraged by the stupidity and inefficiency of the dumb politicians in Washington" -- hardly a posture that narrowed his appeal.

In the last six weeks, though, Americans have met a very different Donald Trump -- an explicitly political man who has loudly and insistently aligned himself with a narrow segment of the ideological spectrum. And he's made it personal, too, embracing not just the far right's politics but also its deep, practically paranoid resentment of Barack Obama.

In the short term, this had value for Trump: As he challenged Obama's citizenship (and argued that the president owed his education to affirmative action), the right-wing Republican base flocked to him. Most mainstream GOP leaders had maintained a safe distance from "birtherism" and other explicit forms of race-baiting, but here was Donald Trump -- an utterly mainstream internationally famous celebrity -- embracing it head on. Within weeks, Trump was running at or near the top of Republican polls for the 2012 nomination. The idea that he'd actually enter the GOP primaries was still laughable, but with a publicity windfall that was impressive even by Trump's standards, it seemed like he'd achieved his goal.

But now we're beginning to see the consequences of this strategy. By veering so far to the right (and even into the conspiracy theory world) and by belittling Obama at such a personal level, Trump is diminishing his own brand as a mainstream celebrity. Already, David Letterman, on whose show businessman-celebrity Donald Trump has been a regular guest for years, has declared that Trump's antics "smack of racism" and said Trump won't be welcome back on the show unless he apologizes. Jerry Seinfeld, who made sure to include businessman-celebrity Donald Trump on his own short-lived NBC show last year, has backed out of performing at a Trump charity event. Efforts are underway -- with some early success -- to pressure advertisers to abandon Trump's "Apprentice" show on NBC. And now, the same Indianapolis 500 organizers who invited businessman-celebrity Donald Trump to be their pace car driver are apparently reconsidering. The longer Trump keeps all of this up, the more developments like this we'll see.

It's now worth wondering whether Trump, when he finally ends his latest presidential charade (and polls now show him sliding back in the GOP field), will be able to return to his old businessman-celebrity life. Or will he be more like Don Imus, who lost many of his celebrity friends, his WFAN and MSNBC deals, and a big chunk of his audience when he finally went too far in 2007? Sure, Imus is still around, but he's a shadow of his former self, passing the time on the low-rated Fox Business Channel. Donald Trump already has a Fox deal of his own -- weekly appearances on "Fox and Friends." That may be one of the few places he's welcome back at when this is over.