And what is that odd rumbling at 35,000 feet? Plus, eavesdropping on pilots and air traffic controllers 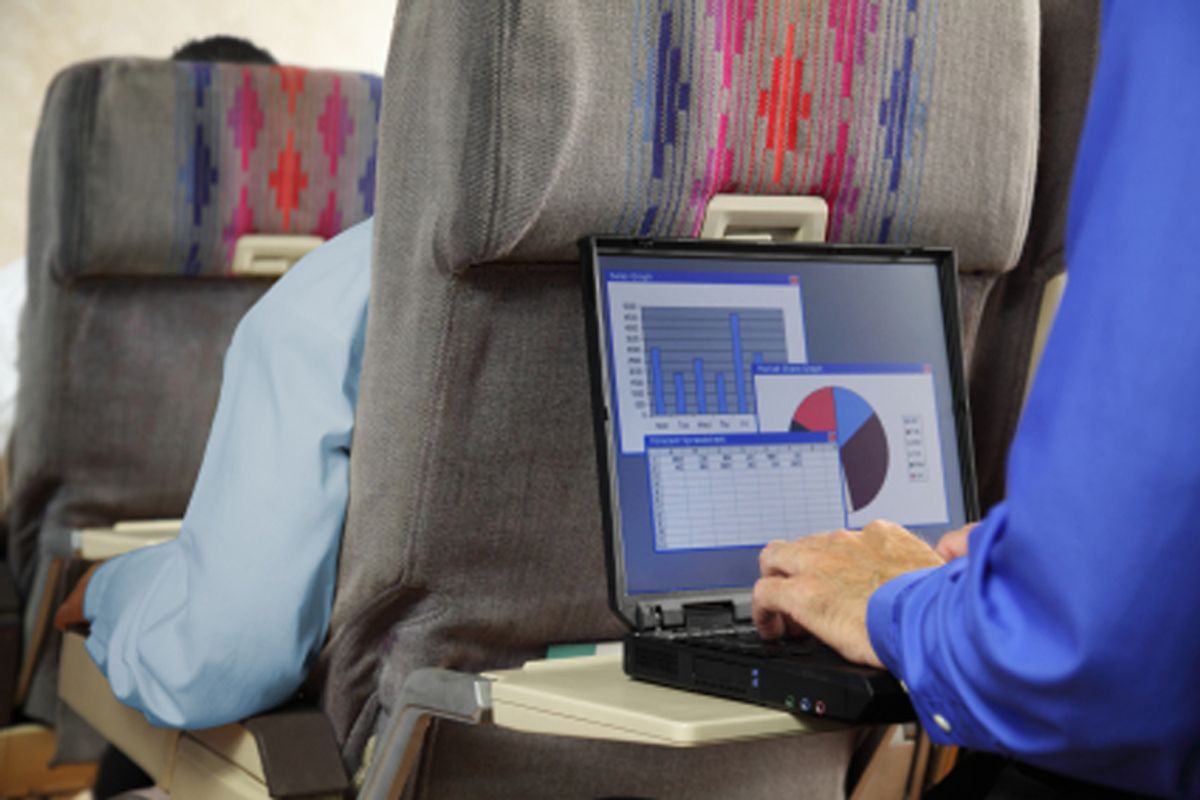 Below, you will find nothing about the takedown of Osama bin Laden, tempted as I was to write about the peculiar vulgarity of our national celebration of his killing, as well as the "stepped-up security measures" put in place at airports. I'm curious how a guardsman standing around with an automatic rifle is going to stop somebody from bombing a plane. But never mind that.

After landing, the crew usually announces that it's all right for passengers to once again use their phones and hand-held devices. But laptop computers, they always emphasize, are still not allowed. Why not?

On the ground, laptops can only be used when the plane is parked at the gate. The issue here isn't about electronic interference, it's about egress. Having a computer in your lap, or on a tray table, could be a serious hindrance in the event of a sudden evacuation. It is also a potential projectile.

I know the various after-landing strictures -- about computers, seat belts, carry-ons and so forth -- sound like overkill. The flight is over and still we're haranguing you with rules. What a drag.

But in some ways taxiing to and from the terminal is the most perilous portion of your journey. Keep in mind that the worst disaster in aviation history involved two planes that never left the ground. Lesser accidents between planes and vehicles are relatively common. Even if they're not catastrophic, such collisions can still be hazardous. And remember that incident a few weeks ago, when the wingtip of a taxiing Air France A380 struck the tail of a Comair regional jet that had just landed. The Comair plane was stationary at the mouth of the apron, only a few feet from its parking position, when it was rammed and spun like a toy.

Once in a while, during cruise flight, I suddenly hear a loud rumbling, as if engine power is being increased. This lasts for a few minutes, and then it dies down. It sounds almost like taking off, yet the plane doesn't seem to be climbing. Is this done to increase speed? Is it some sort of periodic test?

What you're describing is a "cruise climb," a point during flight when the crew is climbing to a higher altitude, be it for traffic or weather or better economy or whatever. Engine thrust is increased substantially, resulting in a noisy rumble. But because this type of climb is a lot more gradual than the departure climb, you don't necessarily feel it.

Because of the odd acoustics of an aircraft cabin, this often is only detectable if you're seated aft of the engines. The forward cabin usually stays quiet, and you may not notice the climb at all.

My flight sat on the tarmac at BWI airport for several minutes during a weather delay. This would have been unbearable except for United's Channel 9, which allows passengers to eavesdrop on conversations between pilots and controllers. While listening, I kept hearing aircraft being referred to as "swans." For example:

Ground control: "Are you a swan?"

Ground control: "OK, we'll get you pushed in the next five minutes."

What does this bizarre term refer to? What the heck is a swan?

After taking off, planes will follow a particular departure profile -- a series of climbs and turns -- called a "SID" (standard instrument departure). SIDs keep traffic organized along particular pathways. An airport can have a dozen or more published SIDs. Which one you'll fly depends on which runway you're assigned, the direction in which the flight is ultimately headed, the aircraft type and other factors. Each SID has a name, and the names are taken from one of the five-character fixes that define the routing. At BWI there is a SID called the SWANN, borrowing from the name of a fix east of Baltimore. So, basically, for queue-planning purposes, the ground controller was curious which way the United flight would be heading after takeoff. (Ground control is in charge of movements in the airport itself and isn't necessarily aware of which airborne routings have been assigned.)

Planes follow similar published pathways on arrival. These are called STARs (standard terminal arrival route). They too are usually named after one of the five-letter fixes that make up the procedure.

Aside from SIDs and STARs, the entire airspace structure of the United States, and the rest of the world, for that matter, is overlaid by tens of thousands of these five-character point-in-space fixes, which are also called "intersections." The naming is usually random, but once in a while a fix will be coined in folksy reference to some geographic or cultural characteristic on the ground below. In the case of SWANN it's Swann Park, Md.

SCROD is a transatlantic gateway fix off the coast of Labrador, not far from OYSTR, PRAWN and CRABB. BOSOX is one not far from where I live (baseball fans will understand). And so on. God only knows what's going on beneath BLOWN, LAYED and BAABY, a trio of intersections over West Virginia and Pennsylvania.

In your discussion of pressurization problems a few weeks ago, you talked about emergency descents. Basically, as you explained it, the crew reacts to a decompression by immediately beginning a controlled but very steep, very fast descent. Maybe this is a stupid question, but isn't there a chance of getting in the way of another plane flying below you?

A small chance, perhaps, though pilots will always notify air traffic control if such a descent is necessary. If, for some reason, this is impossible, you've still got TCAS (onboard collision technology) warnings, plus the fact that it's very unlikely you'll be dropping directly into another plane's path to begin with. On oceanic flights where there is no ATC radar, the protocol is to turn perpendicular to the route before making any sudden altitude change.