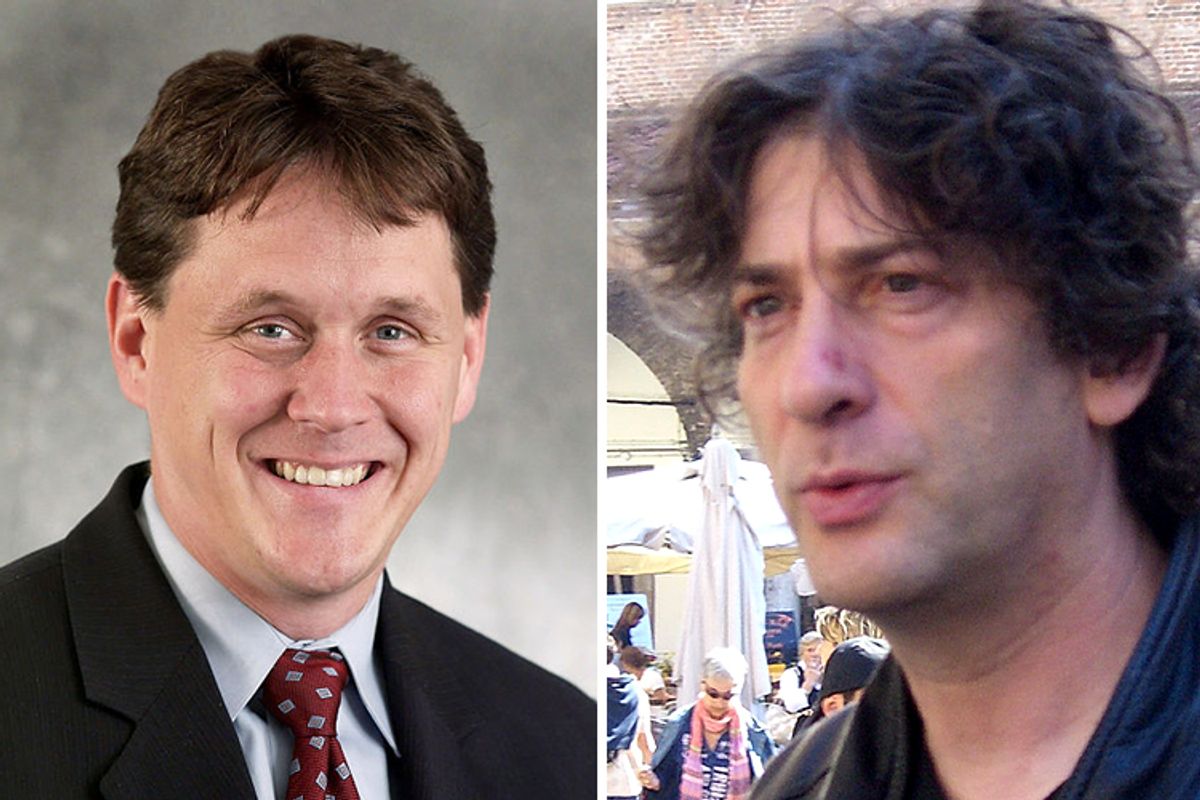 Minnesota does this very nice thing where 3/8 of one percent of the state’s sales tax goes to what is known as the Legacy Fund, which is primarily dedicated to clean air and land and water and parks and nature, but which also spends a bit of money preserving the state's "arts and cultural heritage," because Minnesotans enjoy the arts, and culture, and there is, in that state, a long bipartisan history of supporting those nice things, as a sort of public good. This very nice thing is in the Minnesota constitution, because the people voted for it.

The newly elected Republicans who recently took control of both of Minnesota's legislative houses, though, are residents of Tea Party America, and in Tea Party America the government has no business spending money on anything besides arming militias, to shoot abortion providers. Take it away, House Majority Leader Matt Dean:

Dean also singled out a $45,000 payment of Legacy money that was made last year to science fiction writer Neil Gaiman for a four-hour speaking appearance. Dean said that Gaiman, "who I hate," was a "pencil-necked little weasel who stole $45,000 from the state of Minnesota."

Why would Dean have anything against internationally beloved author Neil Gaiman? Does he hate enchantment?

As Gaiman explained at length, at the time the library story "broke," he was offered that much money -- his regular speaking fee -- by a Stillwater, Minnesota, library that had to use the Legacy money (which is meant to do things like bring famous authors to suburban libraries) by the end of the month, or else lose it. Gaiman gave the money to charity.

Gaiman responded to Dean on his blog today, and it is well worth reading:

I think that Minnesota has things it can be proud of - quality of life things, that make it really good to live in this part of the world. The things that have kept me out here for twenty years. One of the biggest things is it has really good Public Radio and a thriving, active, involved arts scene. It makes me sad to see people trying to crush or even diminish these as part of their political agenda.

And also I think that if you're a Republican in Minnesota, and you read my books or my blog, you could do worse than tell Matt Dean what you think of this kind of bullying schoolyard nonsense from someone who's meant to be representing you. Honestly, it makes you all look bad.

Oh, right, public radio. This bizarre attack on a writer who is probably far too successful and popular to still warrant the "cult" label was part of a push to defund public radio.

But it is a sort of half-assed attempt at defunding, honestly. Minnesota Public Radio (distributor of "A Prairie Home Companion," producer of "Marketplace" and "The Splendid Table") receives a bit of money from the Legacy Fund. After the panel in charge of giving out the Legacy Funds approved legislation giving public radio and television millions of dollars, Leader Dean was forced to remind Rep. Dean Urdhal, the Republican chairing the House Legacy Funding Division panel, that Republicans hate public radio. So Urdahl introduced a new amendment that would make everyone compete for grants, instead of just being given the money by the legislature. MPR will very likely still get money. Socialism... averted?

Attacking "A Prairie Home Companion" and the author of "Coraline" is deeply stupid Republican overreach -- about as tone-deaf as a heartland Democrat threatening to take your guns away -- because those things are very popular, among many groups of voters, across Minnesota and the country as a whole. Dean may hate Gaiman, for reasons unknown, but there are a lot of teenaged goth girls (and women who were once teenaged goth girls) in the Twin Cities and surrounding suburbs, and Rep. Dean will surely regret crossing them.