"Justified": A poignant end to a bloody season 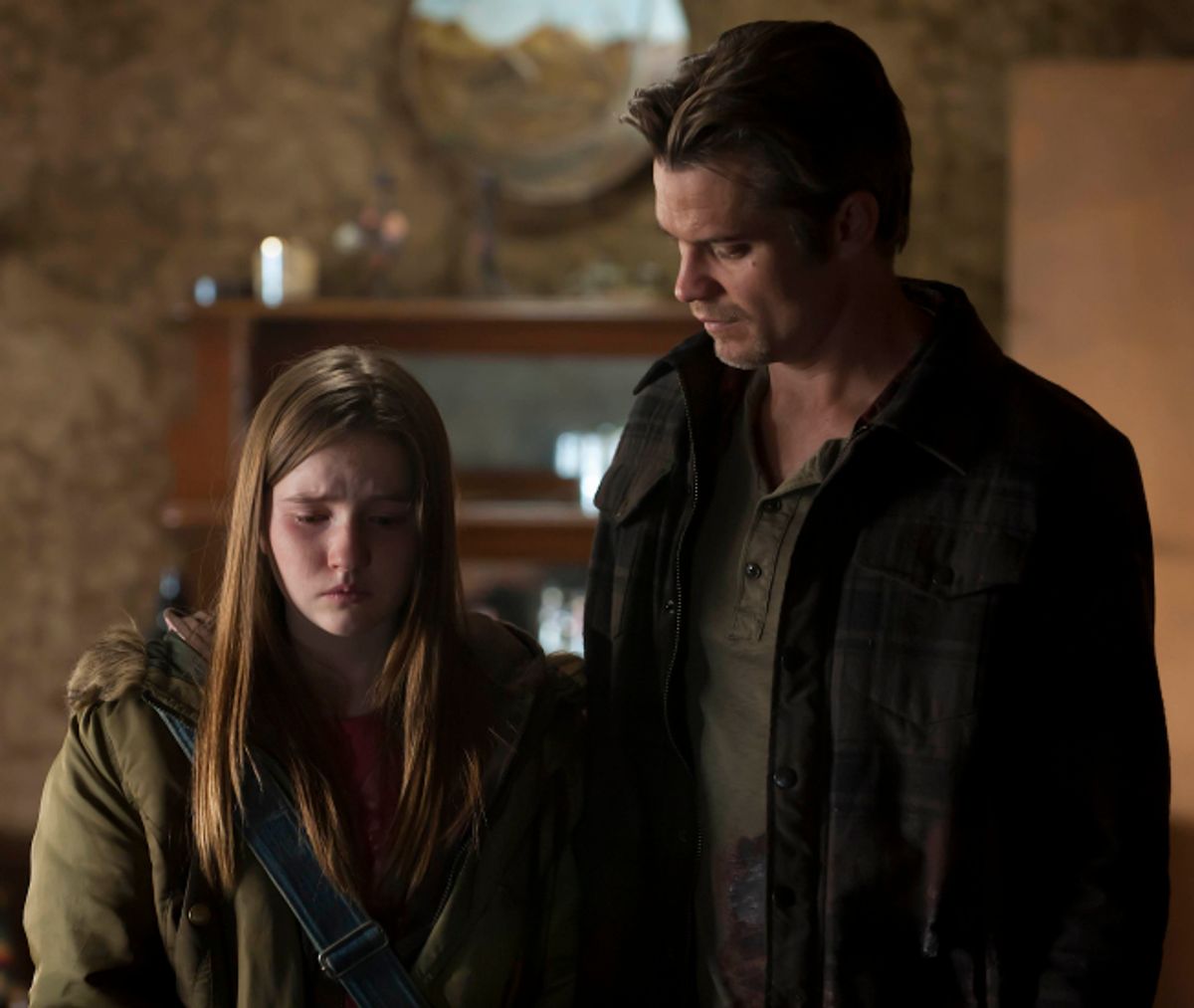 "Bloody Harlan," the second season finale of FX's modern western "Justified," was a grim yet poignant capper to a mostly terrific run of episodes. It also pointed the way toward a promising third season in which the show might become even more ambitious.

In its sophomore year, the series mastered the tone of its founding author and executive producer Elmore Leonard, then pushed past it and became its own thing -- a mostly uncategorizable blend of crime thriller, community portrait, psychodrama, sociological case study and "Walking Tall"-style crackersploitation action flick. This is no small achievement. It's hard to nail that Leonard vibe -- relaxed yet precise; cool, but with a buried romantic streak -- without seeming affected. "Justified" did it so well that it earned a spot on the short list of the best Leonard adaptations, alongside Quentin Tarantino's "Jackie Brown" and Steven Soderbergh's "Out of Sight." But these last four or five episodes -- in which the three-way Bennett-Crowder-Givens feud and the tale of the poor, orphaned, now vengeance-obsessed teenager Loretta (Kaitlyn Dever) merged with the larger story of a mining company trying to environmentally rape Harlan County via mountaintop removal -- were leagues beyond anything the show has tried before.

The result played like an epic Clint Eastwood revenge western, as scripted by Flannery O'Connor from beyond the grave. Series creator Graham Yost and his writing and directing team built every episode around the notion of these characters being as strongly rooted in the history of Harlan as the trees clinging to those soon-to-be-pulverized mountaintops. Most of the major players are to some extent prisoners of childhood conditioning and family lore, and must fight to escape them even for a little while. When Raylan (Timothy Olyphant) talks to his girlfriend Winona Hawkins (Natalie Zea) and his boss Art Mullen (Nick Searcy) about leaving Harlan (again!) to go to Glyncoe and become a weapons instructor, he's not just trying to catch a breather from all the war zone-style violence (which is frequent, spectacular and, for rural Kentucky, ludicrous); he's trying to disentangle himself from the family loyalties and personal affinities that choke him like kudzu and stop him from becoming the better man that his murdered aunt-turned-stepmother Helen (Linda Gehringer) believed he could be. Raylan's ongoing, internal struggle -- childish redneck righteousness wrestling with adult wisdom and civility -- seemed like something more than a cowboy movie cliché this year, thanks to Olyphant's subtle, vulnerable work as Raylan, Walton Goggins' diamond-hard performance as his frenemy Boyd Crowder, and the "Godfather"-style manipulating and double-crossing regarding the mining company's scheme and the divvying up of the Bennetts' criminal empire. "Aside from money," asked Bennett family matriarch Mags (Margo Martindale), "what is business but contracts and agreements?"

There was so much to like in this hour: the painfully awkward exchanges between Raylan and the rightly cold, distrustful Art; the sudden and spectacular eruptions of violence, especially the raid on Boyd's house that resulted in his girlfriend Ava (Joelle Carter) getting shot and wounded; the aborted parley in the church (an ironic location given how flagrantly these characters disregard Jesus' message of forgiveness and peace); Dickie Bennett (Jeremy Davies) using Raylan as a piñata; and most of all those final confrontations between Mags and Loretta, then Raylan and Loretta.

I love how the Mags/Loretta relationship is a dark mirror of the one that Raylan described last week in the scene where he was about to execute Dickie in the woods, then stopped himself after recalling what his stepmother had meant to him. For all her neediness and genuine maternal affection, Mags was a poisonous woman who murdered a man, then tried to turn his little girl into the daughter she never had. But Helen's surrogate parenthood was pure and loving. She saved Raylan from becoming just another hillbilly criminal by teasing out the better angels of his nature, and Raylan paid her goodness forward by talking Loretta off the precipice of rage and convincing her to give up that that stolen gun. The moment represented the full flowering of the idea that everybody is potentially a parental figure (a moral guide) to every other human being, and that once we accept that, we accept that "family" means more than blood -- that it means a responsiblity to the entire community and to the human race in general. The scene where Raylan saves Loretta from her worst instincts was less a police negotiation than a metaphysical rescue. He pulled a grief-stricken teenager back from the brink of spiritual ruin and sent her down the path toward grace -- which is to say that Raylan demonstrated self-knowledge, proved himself worthy of his stepmom's love, and showed what sort of dad he may become to the child Winona is carrying. (Earlier in the episode, when Raylan was asked how he knew that Loretta was going to try to kill Mags, he replied, "Because that's what I would have done when I was her age.")

And Mags' farewell drink? Chilling. Clever. And (I was surprised, too) almost unbearably sad. I still can't quite decide what I think of it overall; I have deeply mixed feelings. Yes, it was a great exit -- a melancholy moment of self-immolating fear and shame that further humanized this Ma Barker-like crime boss. But that last drink of "apple pie" also means that "Justified" can't put Mags at the center of season three. That deprives a terrific show of its most complex antagonist yet and makes "Justified" feel a bit too neat -- too much like just another hard-edged cable series that feels duty-bound to tie off every subplot during a finale. I'd argue that the tangled network of relationships on this series justifies (yeah, I said it) keeping characters like Mags around for more than a year; the past is always present in Harlan County. But this is a minor quibble. "Justified" is one of the best shows on TV -- exciting, whip-smart, sexy, oddly sweet, and filled with out-of-nowhere grace notes that linger in the mind after the sound of gunfire has faded.