Why won't President Obama release a photo of Osama bin Laden in hell?

Only visual evidence of our worst enemy burning eternally will allow Sarah Palin, rest of the nation to move on 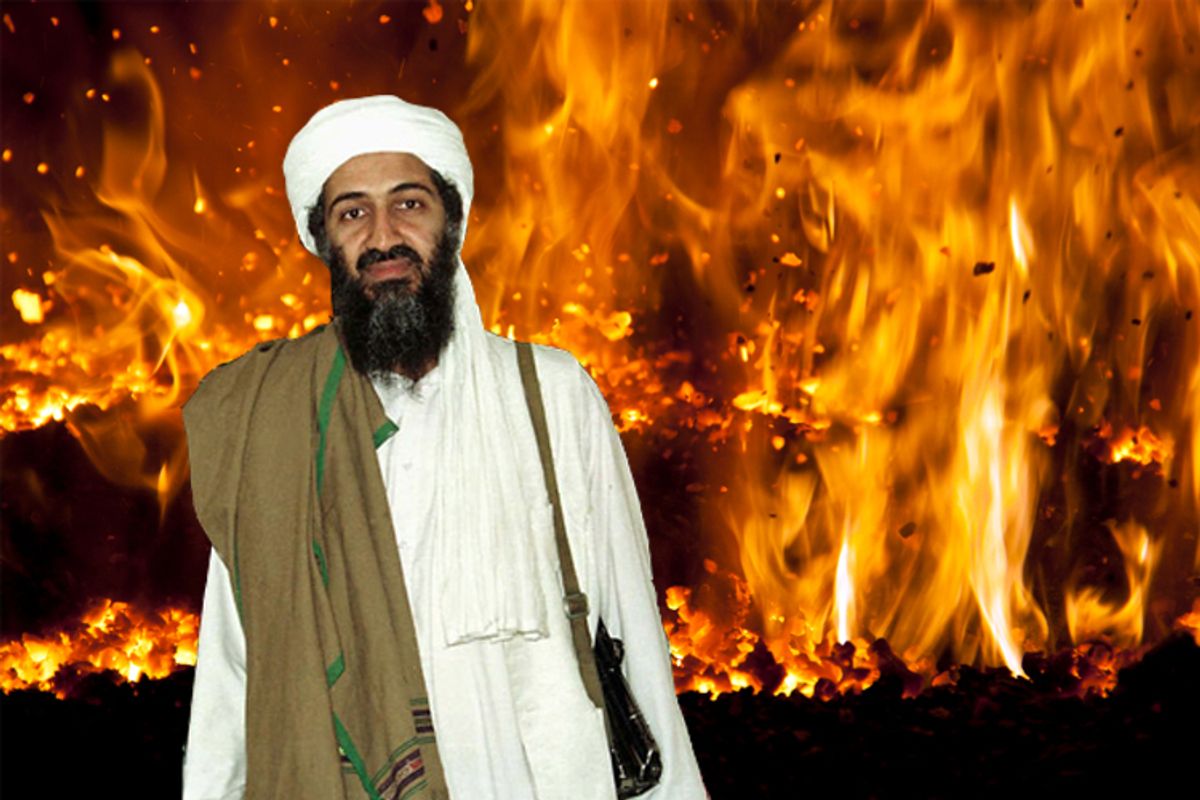 When will Barack Obama finally release, to the American people, the photographic proof of Osama bin Laden in hell, with Ken Cuccinelli and the rest of his "Virginans"? Look, Mr. President: 61 percent of Americans already believe Osama bin Laden is in hell. All we're asking is for you to prove that you stand with a majority of Americans, and officially make that belief true.

The world must see bin Laden roasting in the lake of fire, in order to discourage future would-be terrorists from taking up arms against us. How can Americans feel any sense of closure, at all, without the image of the al-Qaida leader suffering eternal torment at the hands of the devil? Until we have definitive evidence of bin Laden weeping and gnashing his teeth for all eternity, tortured forever by the Beast, we will never prove to those conspiratorial and superstitious Muslims that he has been punished for his wicked deeds.

While some may feel that simply announcing that bin Laden has been killed and justice served is enough, true leaders know that there can be no cleansing catharsis without either a ritual display of the body or at least assurances that the man's eternal soul will never know peace.

Mike Huckabee knows this. Sarah Palin knows this. Now is not the time to "pussy-foot around" the issue of a picture of Osama bin Laden in hell. The picture is part of "the mission," after all: We raid his compound, shoot him in the head, send the photo of his body around the world, and finally illustrate in unflinching detail his last, worst punishment.

Actions are not enough! We need words. And pictures illustrating the actions.

If Barack Obama's post-bin Laden kill approval "bump" does not last as long as it should, it will be entirely his fault, for not repeatedly, loudly proclaiming that the terrorist will burn in hell forever, or releasing a photograph of his mutilated, repulsive corpse. How will the American people know that the president hated bin Laden at all if he won't validate Sarah Palin's blood lust?

Democratic presidents are already at a disadvantage on all matters of national security, because while they tend to manage foreign policy more credibly and successfully, everyone knows they simply don't worship violence and war with as much vigor as Republicans. A Democratic president has to assassinate twice as many terrorists as a Republican, much as they have to deport 10 times as many immigrants, to prove their patriotism.

If Barack Obama wants credit for tracking down Osama bin Laden, he needs to prove to us all that the bad man went to a bad place because he was mean to us.