"Sesame Street": Brought to you by PNC Bank 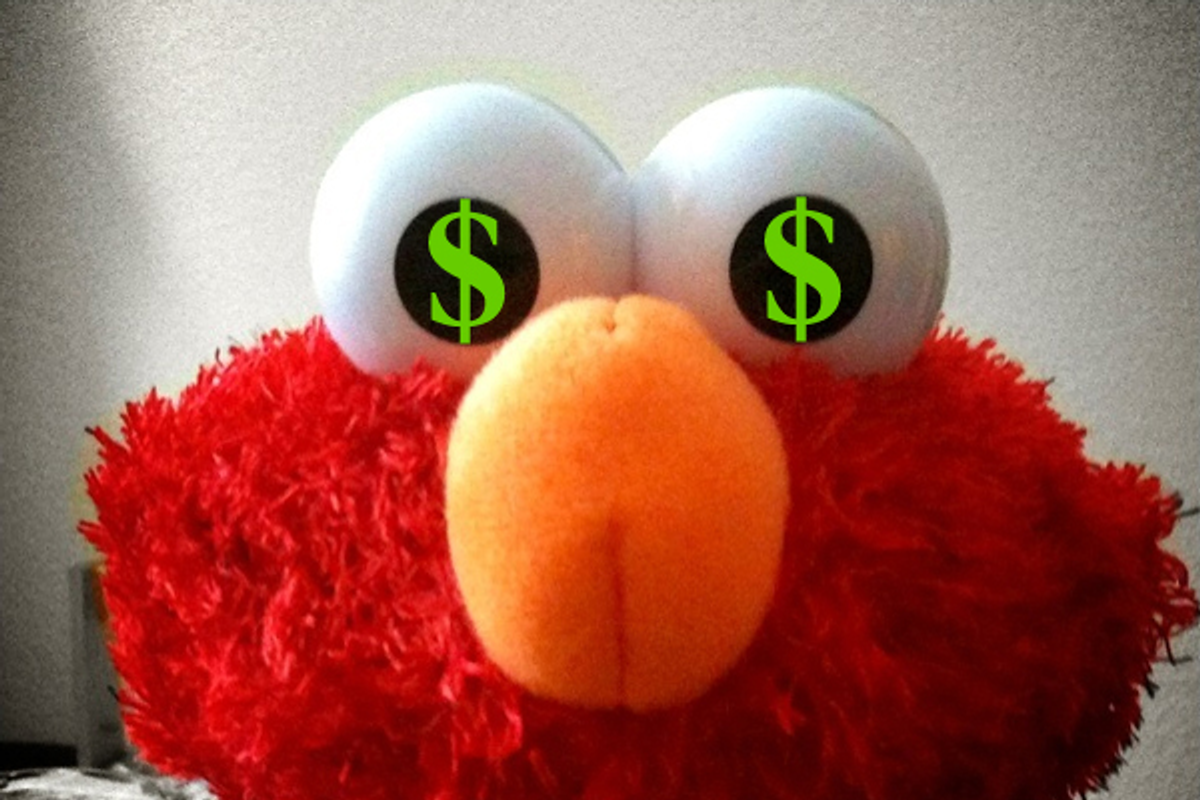 As a new father wracked with typical new-dad worries about how the media -- and specifically the television -- will try to turn my son into a violent, narcissistic greed-head, Sesame Street had been my mental Xanax. Every time I saw Sean Hannity's fleshy visage flash across the screen and worried that monsters like him were just waiting to poison my son the moment he came of TV-viewing age, I just thought of cute little Elmo and felt a wee bit calmer, telling myself that at least some corners of the vast wasteland might actually give my son some positive values -- or at least not turn him into a full-on parasite.

Then I heard the news that Elmo's new sponsor isn't the letter "C" or the number "4," but a bailed-out bank. And not just any bailed-out bank either -- PNC bank, the bank that used $5 billion of taxpayers' cash not for the common-good goal of extending credit during the recession, but for the wholly self-interested objective of buying up a corporate rival.

While this doesn't (yet) mean PBS is changing "Sesame" to "Wall" in the name of its flagship show, it does mean Elmo and other lovable Muppet characters are teaming up with the bank on a new campaign to teach kids about money. That may sound great at first -- after all, USA Today reports that with "money education in schools still limited," the PNC-Sesame Street effort may end up filling a curriculum gap. And besides, lots of the new campaign's specific themes seem perfectly admirable, such as the one promoting the value of saving over time -- a tragically lost ethos in this profligate age.

However, even in the initiative's most seemingly innocuous themes there exists a powerful meta-message selling raw consumerism and materialism. Just look at the foundational video explaining the overall campaign.

First, children see Elmo trying to figure out where to spend his money. He ultimately sets his sights not on something practical or experiential, but on a colorful flashing orb. This "Stupendous Ball" is a perfect simulacrum of the kind of flashy-but-useless Sharper Image-esque gadget that today tricks consumers into so many impulse purchases -- and yet, it is held up as a perfectly rational thing for Elmo to blow his cash on. Ultimately, Elmo gets a manual labor job from an ice cream man (who apparently doesn't care about child labor laws) in order to save up -- and though he settles for "Fantastic Ball" rather than the more expensive "Stupendous Ball," the goal is the same: buying useless crap.

To be sure, this is about as light a touch as you could possibly expect from a marketing campaign that's being underwritten by a commercial for-profit bank -- and admittedly, it is comparatively mild in an advertising environment that so often blatantly shoves product pitches down kids' throats. But it is still selling a problematic ideology to a psychologically vulnerable population -- and that ideology comes with real downsides.

For instance, a 2003 Pennsylvania State University study found a connection between youth-targeted advertising and materialistic attitudes among kids. Four years later, the 2007 study by the University of Illinois found a link in children between materialism and low self esteem. And a 2008 British study found a similar connection between the incessant pressure of consumerist culture and childhood depression.

Instead, Sesame Street could, say, amplify the research-supported notion that money spent on experiences with friends and family leads to more satisfaction than money spent on blingy gadgets like the Fantastic Ball. Alternately, the program could spend more time promoting the idea that you don't have to spend money at all to enjoy life -- and that you should actively avoid trying to keep up with the Joneses.

Perhaps that's just the silly, unrealistic pipe dream of my brain's new-father lobe -- but even in a world where financial behemoths appropriate the cheery iconography of Sesame Street, I can still hope, can't I?