John Bolton: I care about things besides bombing Iran 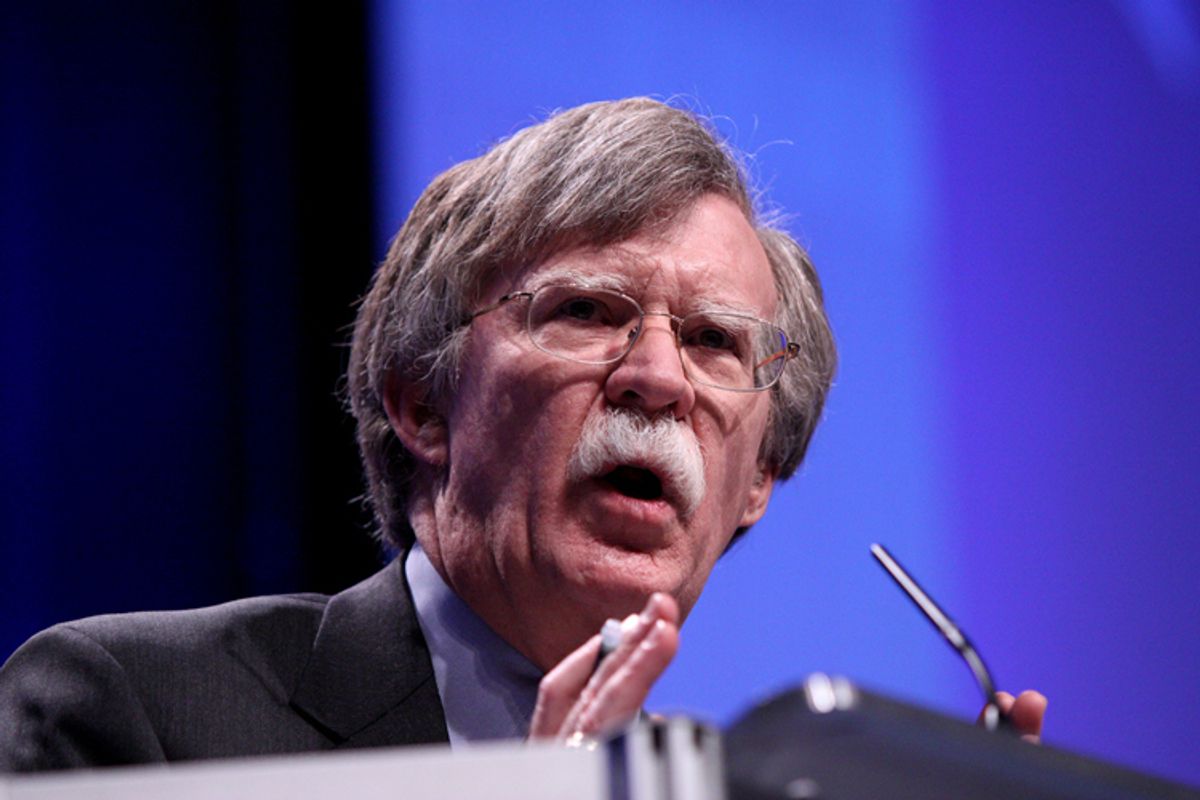 John Bolton, comical Republican foreign policy character actor, is in the midst of his newest and perhaps greatest performance piece, "John Bolton runs for president." Politico checks in with the Republican party's finest facial hair, who wants you to know that he's no "single-issue guy."

Bolton is, of course, a single-issue guy. His issue is bombing Iran. That is the only reason why anyone has expressed any interest in him as a candidate: He is the man who promises to bomb Iran. Every foreign policy issue of our time looks like a nail to John Bolton, and his hammer is bombing Iran.

Some Republican political appointees are representatives of the interests of various GOP-supporting major industries. Others, like Bolton or Michael Brown, are just hacks who are brought in to demonstrate the unimportance and uselessness of whatever position they are supposed to be filling. The message is, a trained chimp -- or a right-wing ideologue -- could do this government job.

In order to express his contempt for the institution of the United Nations, President George W. Bush revoked the ambassador to the U.N.'s Cabinet rank and then gave the job (with a recess appointment) to Bolton, the world's angriest mustache. Bolton has so little respect for the U.N. that he refuses to even admit that it exists. (He also supports the removal of ten stories from the U.N. building. Despite this, he is on no terrorist watch lists that I know of.)

He is best known, among people who don't spend their spare time endlessly rescreening Pamela Geller's TV appearances on YouTube, as the guy who once angrily hurled a stapler at an underling's head, just one of many examples of his incredibly unprofessional behavior.

He eventually turned out to be too much of a right-wing true believer for even the Bush administration, and by the end of Bush's second term, Bolton and his ousted neo-con allies were sniping at their president in the press. "I don't consider Bolton credible," Bush said, which probably caused Bolton to contort his mustache into a comical frowny shape. (What was the president's first hint that his U.N. ambassador wasn't credible? His creepy, flirty relationship with Pamela Geller?)

So, in short, John Bolton is not a credible candidate for anything, at all. He may even be too far gone at this point to score another State Department job in a future Republican administration. He is now and forevermore a creature of right-wing think tanks and Fox News analysis. There's no good reason for Politico to take his presidential fantasies seriously. Like, for example, here is a sentence that they should've probably reconsidered: "Despite his claims that a potential candidacy would not be a niche affair, Bolton is well-positioned to take advantage of the dearth of foreign policy experience currently in the 2012 field." Writing that does not make it true. The power of positive thinking will not create viable presidential candidates out of Bush-era laughingstocks.

(In case you are curious, John Bolton's other issue is abolishing Medicare, because of the deficit.)