On Friday morning, revelations from Abottabad and beyond

A round-up of Friday morning's news, from evidence Osama was still plotting to U.N. watchdogs' demand for facts 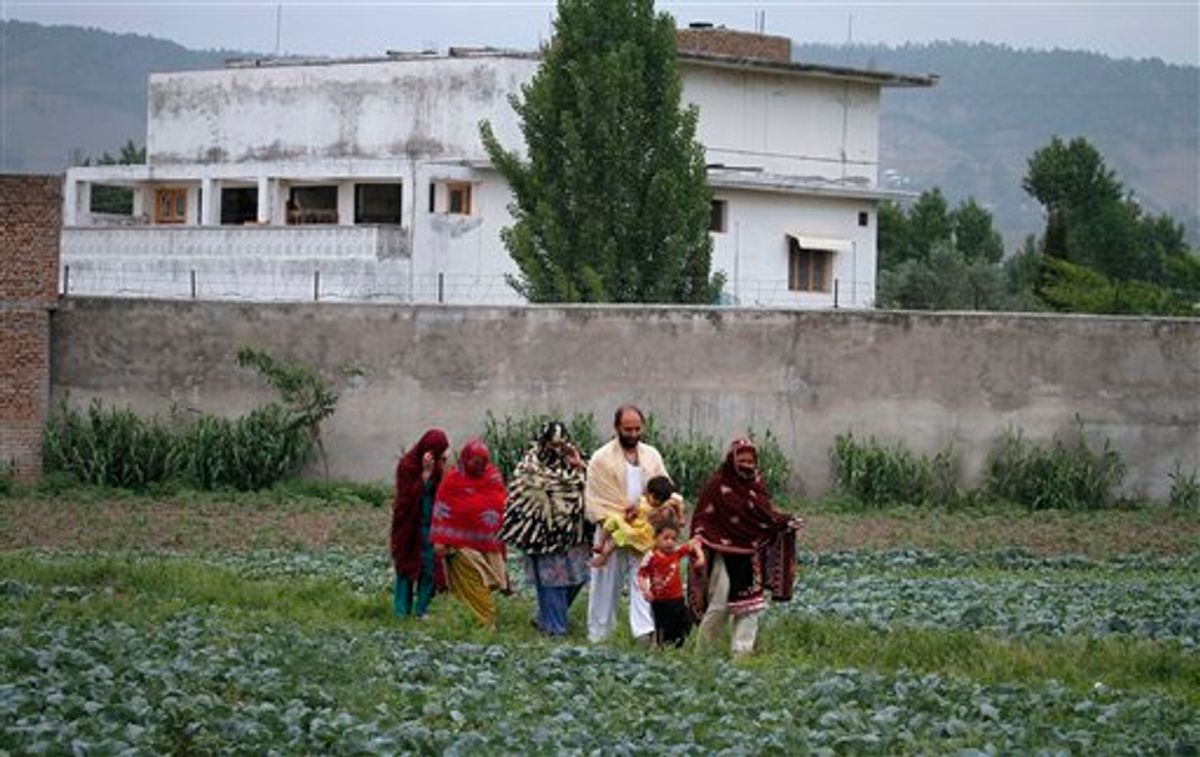 Pakistani family members leave the area after viewing the walled compound of a house, seen in background, where al-Qaida leader Osama bin Laden was caught and killed in Abbottabad, Pakistan, on Thursday, May 5, 2011. The residents of Abbottabad, Pakistan, seem to be confused and suspicious about the killing of Osama bin Laden by a U.S. military force, which took place in their midst before dawn on Monday. (AP Photo/Anjum Naveed) (AP)
--

This morning, some revelations about Osama bin Laden's life in Abbottabad, as well as further news of the international repercussions of his death:

Hand-written notes and digital data recovered from bin Laden's compound allegedly indicate that the terrorist leader was still active in plotting terror attacks while he was holed up in Abbottabad. From The New York Times:

The documents include a handwritten notebook from February 2010 that discusses tampering with tracks to derail a train on a bridge, possibly on Christmas, New Year’s Day, the day of the State of the Union address or the 10th anniversary of the Sept. 11, 2001, attacks, officials said. But they said there was no evidence of a specific plot.

The Times also reports that C.I.A. officers living in a house near the compound "used cameras with telephoto lenses and infrared imaging equipment ... [as well as] sensitive eavesdropping equipment" to keep the compound under surveillance.

The [surveillance] effort was so extensive and costly that the CIA went to Congress in December to secure authority to reallocate tens of millions of dollars within assorted agency budgets to fund it, U.S. officials said. ... [But despite their efforts], no U.S. spy agency was ever able to capture a photograph of bin Laden at the compound before the raid or a recording of the voice of the mysterious male figure whose family occupied the structure’s top two floors.

Bin Laden's youngest wife, Amal al-Sadah, whom (like the other survivors of Sunday's raid) Pakistan has refused to turn over to the U.S. for questioning, has instead been questioned by Pakistani forces; they say she claims that, before Sunday, she had not left the Abbottabad compound in five years.

Although the president of Pakistan, Asif Ali Zardari, has publicly endorsed President Obama's Sunday-night sentiments and celebrated the death of bin Laden, other Pakistani dignitaries -- most notably former president Pervez Musharraf -- have since expressed their displeasure with what Musharraf has labelled a violation of Pakistani sovereignty.

In a new Wall Street Journal interview, Pakistan's foreign secretary Salman Bashir warns of "terrible consequences" if a raid similar to Sunday's is carried out in the future. Bashir tells the paper: "No self-respecting nation would compromise or allow others to compromise its sovereignty. We want to make it absolutely clear to everyone -- do not underestimate Pakistan's capabilities and capacity to do what is necessary for national security."

Two U.N. representatives believe the U.S. "should disclose the supporting facts" about the killing of the al-Qaida leader -- in particular, whether "the planning of the mission allowed an effort to capture bin Laden" -- in order "to allow an assessment in terms of international human rights law standards".

The special rapporteurs, Christof Heyns and Martin Scheinin, said in a statement:

Acts of terrorism are the antithesis of human rights, in particular the right to life. In certain exceptional cases, use of deadly force may be permissible as a measure of last resort in accordance with international standards on the use of force, in order to protect life, including in operations against terrorists.

However, the norm should be that terrorists be dealt with as criminals, through legal processes of arrest, trial and judicially decided punishment.

U.N. human rights high commissioner Navi Pillay spoke out on the same subject yesterday, telling reporters: "I'm still for a full disclosure of the accurate facts. I think it's not just my office but anybody is entitled to know exactly what happened. ... The United Nations condemns terrorism but it also has basic rules of how counter-terrorism activity has to be carried out. It has to be in compliance with international law."

Khaled Hathal Abdullah al-Atifi al-Qahtani, a Saudi Arabian al-Qaida member who had been living in Yemen, has surrendered to Saudi security forces. The Guardian reports that al-Qahtani "figured high on a list of 47 most-wanted terrorists recently issued by Riyadh" -- but also quotes the Norwegian Defence Research Establishment's Thomas Hegghammer, who downplays the role of bin Laden's assassination in al-Qahtani's move. Says Hegghammer: "There have been quite a few similar cases. It's more likely due to other reasons. Family pressures often play a very significant role."