Can Google stay on top?

The digital giant is rapidly overtaking our lives -- but has it lost its moral compass? An expert explains 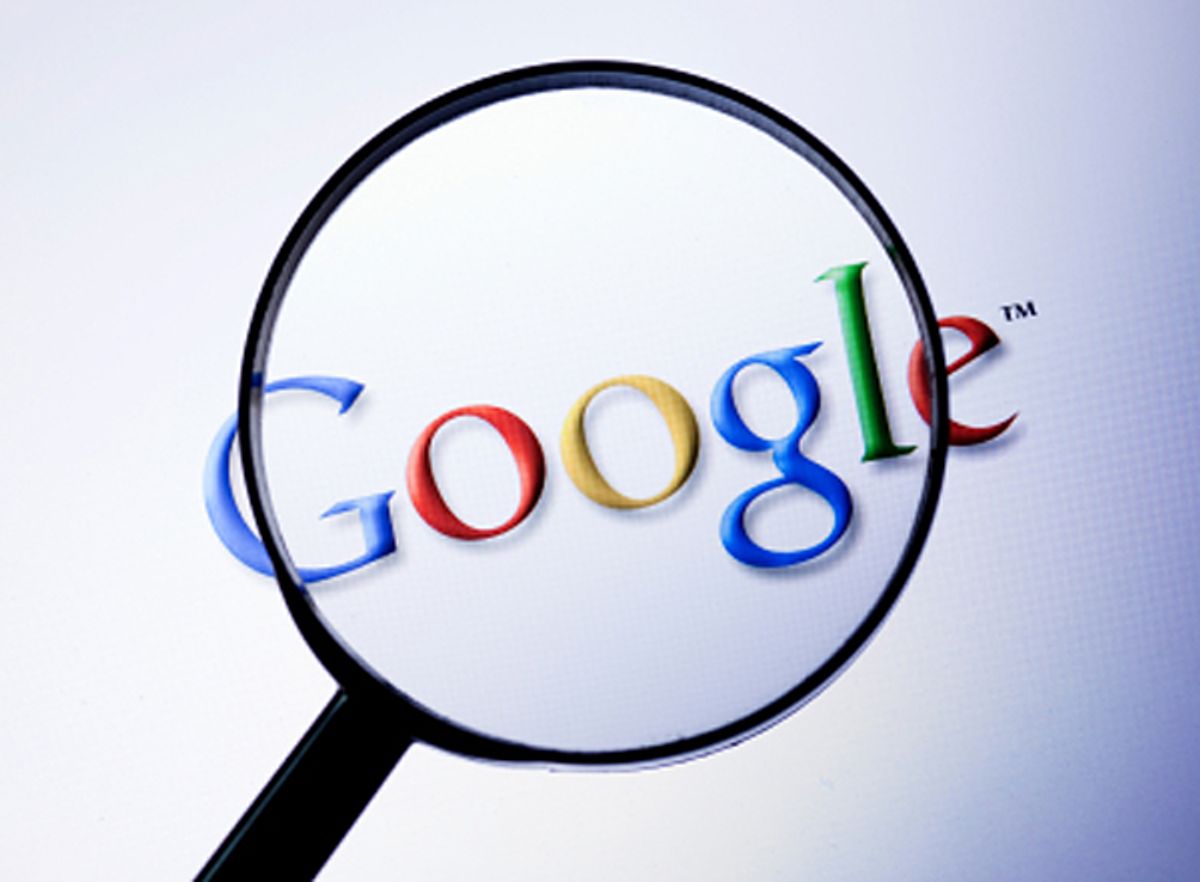 Google's unofficial motto is "Don't be evil" -- but can a company of such mythic proportions possibly keep its soul? That's the challenge now facing Google, which has transformed from a jumbled office over a bike shop in California to a behemoth that not only dominates the search engine field but also has a major presence in mobile phones, email, personal data collection and advertising among other fields. Can a company that rakes in several billion dollars annually and holds the key to almost all of the questions on the planet really resist growing a God complex? We all use Google -- but can we trust it?

To answer that question, Steven Levy turned to the people inside the company itself. As a journalist for Wired and Newsweek, Levy has been covering Google since 1999, and his book "In the Plex" offers a rare glimpse inside Googleplex headquarters, bringing to life the creative minds and quirky personalities of not only founders Sergey Brin and Larry Page but also the employees at one of the world's most sought-after workplaces -- the Googlers, as they're called. Eating at campus restaurants and sitting in on executive meetings, Levy narrates the history of a company that has managed to assimilate itself into the lives and language of Internet users across the globe.

Levy explains the company’s baffling ability to make money on a free product, and its attempts to scan every book ever made and enter the social media world. But the biggest challenge may simply be keeping the goodwill users have always felt toward it. As the company gets bigger, it becomes harder to convince users that it's not actually, perhaps, a tiny bit evil after all.

Salon spoke to Levy over the phone about whether Google’s image is slipping, what it thinks about Facebook and the unlikely influence of Montessori education on the way we browse.

Why is it important to understand the inner workings of Google?

Google is a forward-thinking company, so to understand the future you have to understand Google, because they're a tuning fork for the frequency of the future. There's a lot that all companies could learn about management and even failures that are instructive. The narrative backbone of the book deals with idealism and morality and how you keep it.

In the book you explain the origin of the ads that appear on the sidebar of Gmail, which caused a backlash among users. Ironically, that idea came from the same guy who helped come up with the informal Google motto, "Don't be evil."

That was a big turning point for Google and it's a harbinger of issues the company has to deal with now. It was the first alert to people that Google had a lot of information about them. Google felt that what they were doing wouldn't be a problem for people once they understood that it really wasn't people reading the mail, it was the algorithms analyzing the mail and trying to find an appropriate ad. But that didn't matter to people -- emotionally, people were flipped out a little. The word "creepy" kept coming up. Even though that particular controversy has subsided, it was the beginning of an era marked by people being conscious of Google as a potential threat to their privacy.

Still the biggest issue involving Google is just how easy it makes it for people to get information -- which previously was happily buried -- to come up in an instant. So when someone Googles your name it's like your résumé. But it's a résumé that you don't have ultimate control of. Even if Google didn't make that happen -- it quite rightfully wants to report the most accurate information and the most accurate results -- I think Google has to take ownership of that problem and come up with something so people don't have to hire companies to clean their reputations online. It's a very tough problem. I think Google is the one place that should be thinking hard about the happy medium between exposing private information and keeping public information public.

Do you think Google's image is on the decline?

I think when people think of Google they have a good feeling, but that feeling isn't unalloyed pleasure -- there's also a bit of concern because Google has so much information, because it has so much power in the marketplace and people are wary of it.

Google's intention to make all books available online has been highly controversial. Google claims what it is doing is for the good of everyone, but you cast some suspicion on Google's intentions, suggesting that the book scanning started as a covert operation.

It isn't so much that they were trying to put one over, it's just that secrecy is a big part of Google. It's unclear if being open to the publishers would have just postponed the fight that was going to come anyway. But it certainly exacerbated the situation and put things off on the wrong foot. As far as the publishers were concerned, when they said, "Wait a minute we've been talking to these guys about one thing and behind our back they're doing something else" -- that set the stage for bad relations which did get smoothed over ultimately in terms of the settlement, which then of course got knocked down by other people.

Can you tell us about the culture you observed when you spent time at Google?

It's sort of a combination of Montessori preschool and a campus, a big elite university. So I think that on the one hand there is this whimsy and Never Never Land -- lost boys sort of thing -- and on the other hand they have a business justification for why they do everything. I found that they have $17 a day for food for each Googler. Well, what do you get for that? You get people not leaving the campus to have lunch. And what do they get paid an hour? A lot more than $17. So if you get an hour's work from someone, there's your money right there. But also it makes people feel good towards the company. People sit at the table together and make connections with other people in other divisions. It's a recruitment tool.

There are the famous massage folks and the fitness centers ... they went a little over the top with the very elaborate daycare center and had to scale back, but it's this sort of idea, that everything is taken care of. One year they gave out these earthquakes kits to everyone with food in it because they figured if people were stuck at home and there was this horrible earthquake at night, a lot of people from Google don't have any food in their fridge because they eat all their meals at Google.

I was surprised to read that Page and Brin's Montessori schooling played such a large part in Google culture.

I asked each of the founders about it, and they agreed that this made a difference to them. I actually read a book by Maria Montessori about her philosophy, and it really did seem to sync a lot with the idea -- almost like a militant view that people should not be forced to do what other people want them to do. So much more gets done, and you learn so much more. But also, extrapolating, you do so much better work if you're working at something you're passionate about.

Co-founder Larry Page is taking on the role of CEO at Google, a role previously held by Eric Schmidt. What will that do for the company and its soul?

Larry reclaiming the CEO role is sort of a soul infusion for Google, because the company's core values have always been Larry's values, shared by Sergey. But Larry really has been the driving force there in the company, and his obsessions with speed and the scale and most of all ambition have been at the center.

Why is Google at war with Facebook and social media?

It's clearly really important to Google, and I think after a lot of missteps and difficulties in that space they're focusing on it in a way they never have before. It will be interesting to see what they come up with. Some of it we've seen already -- social search and plus one button. Ultimately what Google has to do is make sure they're not shut out of the social world. There's all this information available, people decide who they're in contact with and where they are, and if Google can't get ahold of that information it will be very unhappy and it won't be able to serve its users that well.

Who are Google's competitors?

Google just collects new competitors. When it started, it wasn't competing with Apple or with phone companies; it wasn't competing with television networks or companies with social software. It's a characteristic of Google that if it thinks a certain area will be fruitful for it, it just goes there, it doesn't really worry, "Oh we're going to tick off this competitor and engage that one." Traditionally Eric Schmidt was successful in postponing Google's entry into certain areas, but the way Larry thinks is, if we could deliver value we should just do it and not worry.

What is the future of Google?

Larry is fixated on doing big things and he's also fixated on artificial intelligence, so that's probably the big clue as to what big initiatives will come from Google. They are the kinds of things that could pay off big or they could be follies, but that's built-in.

Google is really built to accommodate failure -- literally, its infrastructure and its software, from the design of the way the file system is built. It's made to use cheap equipment and can accommodate for the failure of that equipment at a higher rate than other companies can. There are a lot of redundancies in search queries -- so in a weird way, failure. And dealing with failure is one reason why Google has been so successful, and they get search results so quickly, because if something goes down in the system it doesn't even stop for a heartbeat, it just goes on. So one would expect to see huge failures and maybe great successes from what comes next from Google.