The massacre you've been ignoring

With the Western media focused on bin Laden, the situation in Syria has been deteriorating 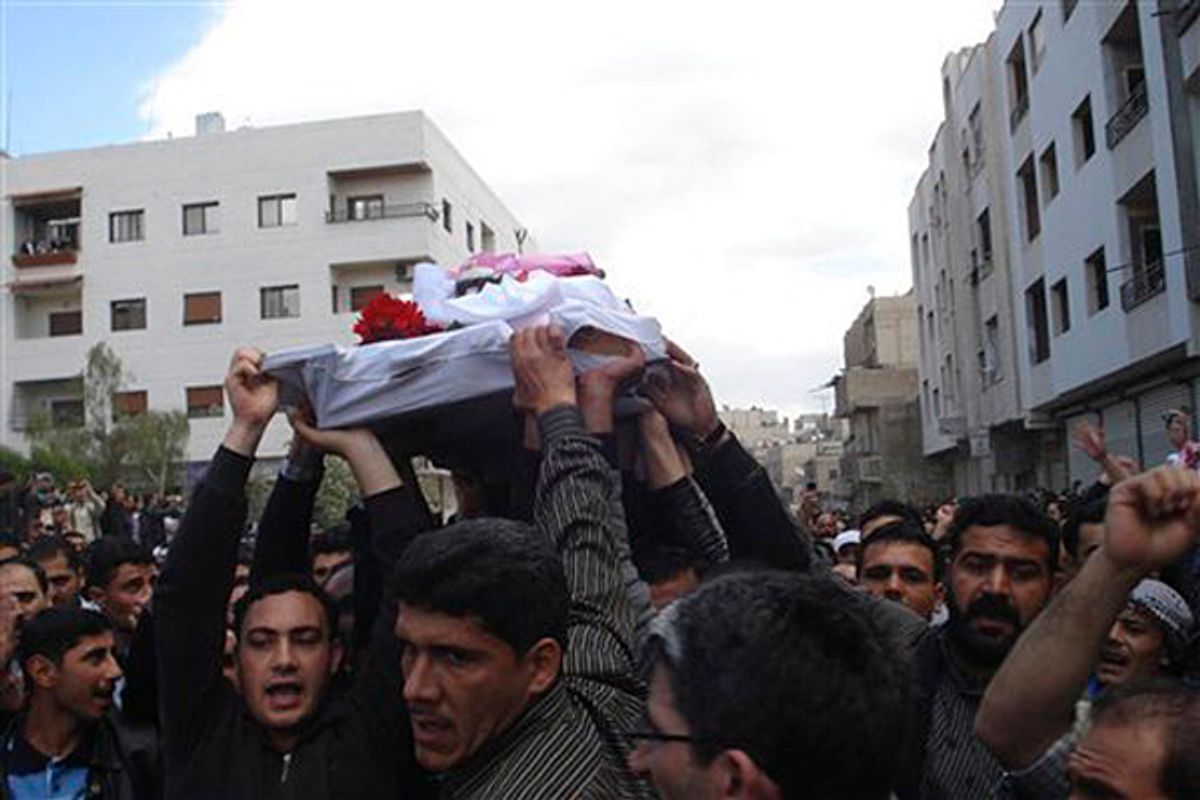 In this citizen journalism image made on a mobile phone and acquired Saturday April 23, 2011, by The AP, Syrian anti-government protesters carry the coffin of an activist who was killed on Friday during his funeral procession in Quaboun near Damascus, Syria, Saturday, April 23, 2011. Syrian security forces fired on tens of thousands of mourners during funeral processions Saturday, killing several people following the deadliest day of the uprising against authoritarian President Bashar Assad. (AP Photo) (Str)
--

While the U.S. media has been focused on Libya, the president's birth certificate and Osama bin Laden, a dramatic and brutal showdown has been unfolding between the government of Syria and opposition protesters.

An estimated 500 to 600 civilians have been killed in the 50-day uprising, and forces of the Bashar al-Assad regime have repeatedly opened fire on protesters. Part of the reason for the lack of American media coverage is that Western reporters were expelled from the country early on, and most are now covering the situation from neighboring Lebanon.

For an update on the uprising and a take on the Obama administration's Syria policy, I spoke to Joshua Landis, a professor at the University of Oklahoma and the proprietor of the well-respected blog Syria Comment.

Who makes up the opposition?

Well, we know a certain sliver of the opposition very well because there are a number of activists who have been supported by U.S. pro-democracy money for five years now. They've been working away developing websites and expertise on democratic transformation. They are very liberal, very pro-American -- everything that America likes. But we don't know how big or important that group of liberals is. Civil society in Syria has been so severely restricted. Not as much as it had been in Iraq, but it's not far from that scale. So we don't know how powerful various parties would become if we take a lid off.

The strength of the opposition is that it has no leadership, and therefore the leadership cannot be easily snuffed out. It is led by young activists in their 20s and early 30s who are determined and who have until very recently been able to keep the opposition focused on liberal slogans about freedom, unity, peace, anti-corruption and regime change. They've shown great courage in the face of a very tough repression. But the great weakness of the opposition is that they have no leadership. There are no faces that people can identify with, and no personalities to reassure the silent majority that the future is going to be handled in a way that they would find acceptable.

Describe the new sanctions on Syria imposed by the Obama administration.

Well, America already has several sets of sanctions. Sanctions because it is a terror-supporting state, according to the U.S. Primarily because it supports Hezbollah and Hamas. Sanctions placed by President Bush against people who interfere in Lebanon and people who are corrupt. And now Obama has added another layer, against the leaders of Syria's security state, who are most directly responsible for clamping down on the protests. The effect of the sanctions overall has been to slow down the Syrian economy and to put the Syrians on a diet, to reduce their incomes. Sanctions scare away foreign investment. But the new sanctions so far are more symbolic than they are meaningful.

So has the administration had a consistent policy throughout this crisis?

The policy has been to show horror at the brutal treatment of the protesters, to denounce Syria's actions, but not to do anything that would make it incumbent on the U.S. to intervene militarily as it did in Libya. There, Obama said that Gadhafi had to go. And once he said that, the pressure mounted quickly for the U.S. to do something. But Libya is 6 million people. Syria is 22 million. It is an ethnically and religiously divided society, like in Iraq. If the regime is toppled, it's quite likely there would be a civil war. And if that happens, the calls for intervention will be very hard to resist.

There have been more and more criticisms from Republican leaders that the Obama administration has been too soft on Syria. Where is this coming from? Is this all about Israel?

It is largely about Israel. U.S. interest in Syria has almost always been a subset of the U.S.-Israel relationship. We have sanctions on Syria because it is part of the Arab-Israeli conflict, and they are trying to get their occupied territory -- the Golan Heights -- back. So they look for allies in the fight against Israel, and this makes them our enemy.

You mentioned the courage the protesters have shown. The numbers of dead seem quite high. How bad has the crackdown been?

There's been 500 to 600 dead. The Syrian government has shot at people. They haven't let the demonstrations grow. If you adjust for population, in Bahrain, the government killed twice as many of its citizens. They were given a pass, their ambassador was invited to the royal wedding in London. That's because America has oil interests in the Gulf and wants to please Saudi Arabia, and America doesn't care as much about Shiite dead because it doesn't like Iran.

Have the demonstrations been entirely nonviolent?

No. There have been about 80 Syrian soldiers that have been shot. The opposition claims that Syrian soldiers were shot by other government forces. But this has never been proven and is unlikely. The government is saying they are being shot by armed elements -- either Salafists or al-Qaida-type people, or just those that want to destabilize Syria. That argument wins sympathy from many Syrians. But many others want to see revolution. The country is split down the middle, along religious lines -- like Iraq was.

Which side has the momentum right now?

But if the regime does collapse, the state institutions will collapse, as they did in Iraq. Syria is a one-party state, which is the Baath Party. If the opposition takes over the government, the Baath Party will be purged. The state institutions like the military, the intelligence forces, and the Republican Guard will all be disbanded and perhaps some of the leadership will be tried. One can expect close to 2 million people losing their jobs or being affected directly by this. They're going to fight to keep their privileges and their position, just as the Sunnis in Iraq fought. This would turn into a sectarian war. The slogans of freedom, although important, conceal a sectarian split in the country.

That scenario seems grim. Is there a possible positive outcome and what would it look like?

There is a possible positive outcome, which is that Bashar al-Assad remains in power and yet carries out deep reforms. That's what a number of people are hoping for, that he will become humble and realize that in order to bring peace to Syria he's going to have to enact deep reforms.

But based on what he's doing right now, it would seem like things are going in the oppose direction.

Yes, it does seem that way. And in order to enforce his control, he's going to resort to greater sectarian divide-and-rule, which will ultimately weaken Syria and eliminate the possibility of deep reforms. So this looks like a lose-lose situation.