Government has no plans to shut down more functioning nuclear reactors 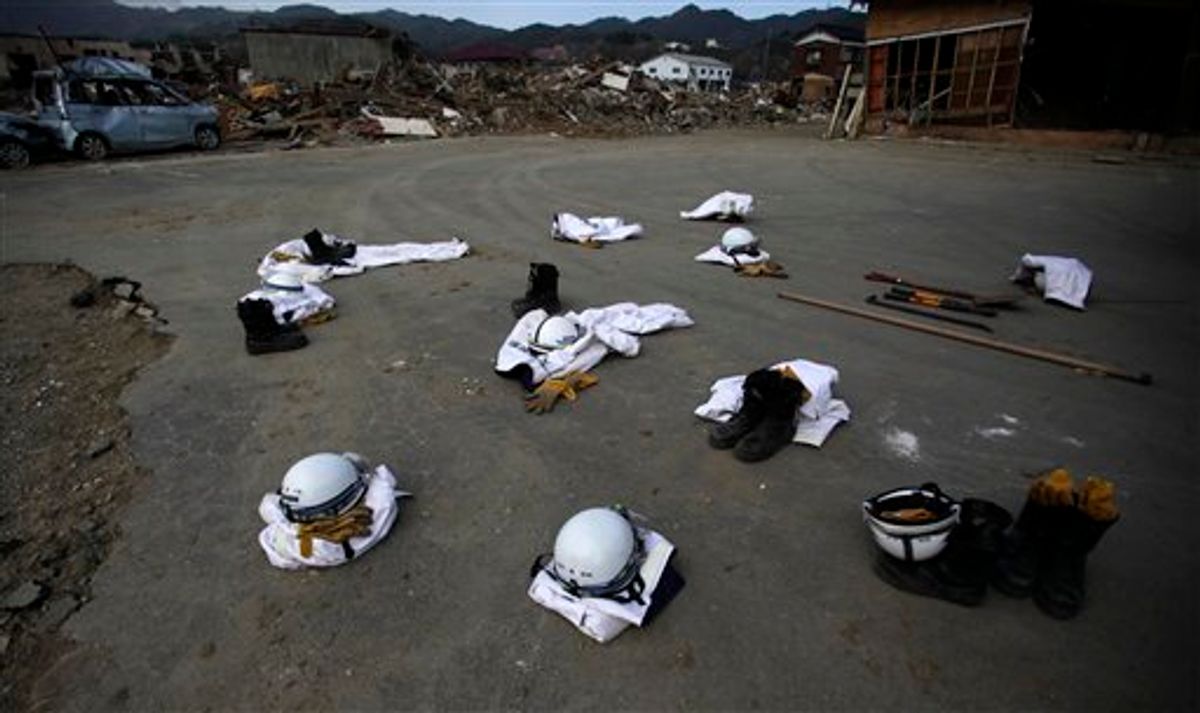 Police officers' protective suits, boots and helmets are placed on the ground while they rest after their recovery operation shift in the area destroyed by the March 11 earthquake and tsunami in Kesennuma, Miyagi Prefecture, northeastern Japan, Saturday, May 7, 2011. (AP Photo/Junji Kurokawa) (AP)
--

Japan will maintain atomic power as a major part of its energy policy despite the country's ongoing nuclear crisis at tsunami-crippled Fukushima Dai-ichi power plant, a top official said Sunday.

Deputy Chief Cabinet Secretary Yoshito Sengoku also said the government has no plans to shut down any more functioning nuclear reactors other than three at the Hamaoka power plant in central Japan. The plant was asked Friday to halt the units until a seawall is built and backup systems are improved at Hamaoka.

"Our energy policy is to stick to nuclear power," Sengoku said on a weekly talk show on public broadcaster NHK.

He said Hamaoka was an exception and that the government's closure request Friday did not mean a departure from its nuclear-reliant policy.

The main concern is that shutting down the reactors would likely worsen power shortages expected this summer.

The government has been reviewing the safety of the country's 54 atomic reactors since a March 11 earthquake and tsunami crippled the Fukushima Dai-ichi nuclear plant in the north. The disaster left more than 25,000 people dead or missing on the northeast coast and triggered the worst nuclear crisis since Chernobyl in 1986.

The Hamaoka plant, which is about 125 miles (200 kilometers) west of Tokyo, in an area where a major quake is expected within decades, has been a major concern for years.

However, Sengoku said there is "no need to worry" about other plants in the country. "Scientifically, that's our conclusion at the moment," he said.

Chubu Electric executives failed to reach a decision Saturday over the shutdown request and will meet again after the weekend, company official Mikio Inomata said. After the meeting, company chairman Toshio Mita left for Qatar to negotiate on liquefied natural gas supplies.

At issue is how to make up for the power shortages that would result from the shutdown of the three reactors. Inomata said they account for more than 10 percent of the company's power supply.

"It would be tight," Inomata said, adding that officials are discussing the possibility of boosting output from gas, oil and coal-fueled power plants and purchasing power from other utility companies.

The Hamaoka plant is a key power provider in central Japan, including nearby Aichi, home of Toyota Motor Corp.

Prime Minister Naoto Kan said Friday that the closure request was for the "people's safety."

He noted that experts estimate there is a 90 percent chance that a quake with a magnitude of 8.0 or higher will strike the region within 30 years.

"That makes Hamaoka an exceptional case," Kan told reporters Sunday, saying the plant is the only one subject to closure for a tsunami resistance upgrade. Kan also urged Chubu executives "to understand."

Residents of Shizuoka prefecture, where Hamaoka is located, have long demanded a shutdown of the plant's reactors. About 79,800 people live within a 6-mile (10-kilometer) radius of the complex.

Since the March 11 disasters, Chubu Electric has drawn up safety measures that include building a 40-foot-high (12-meter-high) seawall nearly a mile (1.5 kilometers) long over the next two to three years, company officials said. Chubu also promised to install additional emergency backup generators and other equipment and improve the water tightness of the reactor buildings.

The Hamaoka plant lacks a concrete sea barrier now. Sand hills between the ocean and the plant are about 32 to 50 feet (10 to 15 meters) high, deemed enough to defend against a tsunami around 26 feet (8 meters) high, officials said. The operator of the Fukushima nuclear plant, Tokyo Electric Power Co., has said the tsunami that wrecked critical power and cooling systems there was at least 46 feet (14 meters) high.

On Sunday, the government approved TEPCO's plan to allow workers return to Fukushima Dai-ichi's No. 1 reactor building to install a new cooling system after leaving its main door open overnight for ventilation, said Hidehiko Nishiyama, spokesman for the Nuclear Industry and Safety Agency.

Radioactivity inside the building has fallen to levels deemed safe for people wearing protective suits to enter, Nishiyama said. Workers rapidly installed air filtering equipment in there Thursday -- their first entry since shortly after the tsunami.

"We judge the environment has improved to one that allows people to enter and work," Nishiyama said.

Workers later Sunday removed air-filtering ducts and machines, leaving holes on the wall unplugged and the door open until Monday morning, when air monitoring staff are to enter for a final check, TEPCO said.

TEPCO spokesman Junichi Matsumoto said some air may escape through the entrance but that radioactivity is too low to cause health risks.

Mari Yamaguchi can be reached at http://twitter.com/mariyamaguchi