Why we need to see the bin Laden raid video 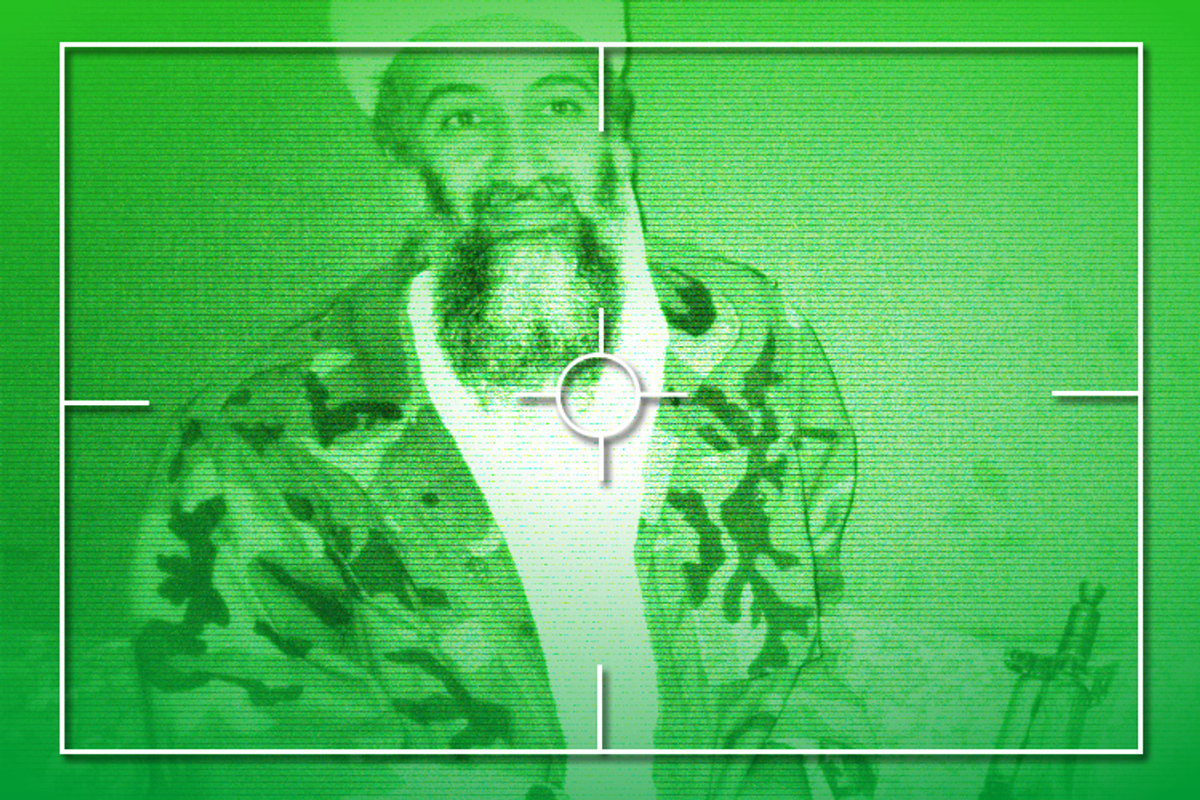 How can you tell that the back-and-forth debate over Osama bin Laden's death photo is all about head-on-a-pike trophy-lust and not about verifying the events of last week? By looking at how almost nobody has bothered to ask for the far more important piece of televisual evidence from Abbottabad, Pakistan: The assault's live video feed -- the piece of evidence that would best elucidate what actually happened.

Yes, in case the "will they release the photo?" sideshow made you forget, it's safe to assume there is a raw video record of at least some of what transpired. Indeed, according to White House counterterrorism advisor John Brennan, the iconic Situation Room picture from the night of May 1 shows the assembled government monitoring "in a real time basis the progress of the operation from its commencement to its time on target to the extraction of the remains and to then the egress off the target." CNN then quoted an administration official confirming that "there was some live video." That fact was reconfirmed later in the week by the Associated Press, which reported that "There was also a video feed from some of the commandos' helmets, though it was not clear that the officials at the CIA and the White House could see the helmet cameras."

It's no surprise that some sort of video record probably exists. The U.S. Special Operations Command told the Daily Beast it is "not uncommon for cameras to be carried into combat operations," and no doubt, the point of having a feed in the bin Laden operation was both operational and political -- that is, to both make sure the commander in chief had genuine "minute-by-minute" command of the mission and to have a way to prove to "tough on terror" voters that the president was intimately involved in -- and, thus, deserves political credit for -- the mission's success. And there should be little doubt that for intelligence analysis purposes, the government today possesses a recording of the feed.

Of course, since first bragging to the world about this "real time" video feed, the White House changed its story four successive times about the actual events of May 1 -- we went from 1) there was a huge firefight led by Osama bin Rambo, who used his helpless wife as a human shield to 2) there was a firefight but bin Laden wasn't armed and didn't use a human shield to 3) There was no lengthy firefight at all to 4) There was no firefight, Osama wasn't armed, and despite initial White House claims that this was a mission to either capture or kill bin Laden, actually, the administration then hinted that the president may have issued a special kill-only order (a possibility that has, according to Reuters, now raised the prospect of a United Nations investigation).

Only when the stories started this wild shift into incoherence did the White House also change its initial story about the video footage. Trotting out a narrative that taps straight into our collective memory of the still-unexplained 18-minute silence on Nixon's Watergate tapes, CIA director Leon Panetta acknowledged the feed ("we had some observation" of events), but said that the video inexplicably blacked out for 20-25 minutes, meaning White House officials "really didn't know just exactly what was going on." Panetta's conveniently timed revision implied that the reason the White House's overall story of the assault changed so often over the last week was because, contrary to its initial claims of having a"minute-by-minute" "real time" account of events, the White House's feed actually blacked out, and officials thus had to slowly piece together the full events over the next few days.

Setting aside how such "didn't know what was going on" rhetoric is so often employed as the vernacular of plausible deniability, this inadvertent-blackout story is hard to believe on the technical merits alone -- the elite-of-the-elite equipped with the best-of-the-best technologies from the multibillion-dollar Pentagon R&D programs suddenly having not one but all of its helmet cams inadvertently fail? Please. But even assuming another explanation -- say, the commandos deliberately turned the cameras off for fear of the feed being hacked by the terrorists -- the Nixon-Tapes Explanation still doesn't account for the White House's shifting stories about the events of the assault.

For instance, even if there was a 20-minute video blackout when troops were inside bin Laden's compound, the same White House officials who said there was a big 40-minute firefight in the lead-up to bin Laden's death would still have seen (or at least been informed in "minute by minute updates") in real-time that, in fact, there was no such firefight. Additionally, if the feed only faded out for that 20-25 minute period, it stands to reason that when it came back on, the "minute-by-minute" updates resumed, and the riveted Situation Room was quickly informed of the real story (which, as of today, stands as Story No. 4 from above).

With U.N. investigators and international law experts starting to ask uncomfortable questions and with the international press now teeming with conflicting stories of the assault (including from one eyewitness who says an already-captured-and-subdued bin Laden was summarily executed in front of his family) the video record is probably the only way to clear up the discrepancies. In short, the video can prove whether the White House deliberately lied about the assault, and, as importantly, answer serious questions being raised about whether the United States violated any international laws.

This, of course, is why I'm guessing the video will be far more heavily guarded than any other evidence from the mission -- including any easily Photoshopped, inherently less revelatory bin Laden death picture.

Ultimately, whether or not the video comes out, its existence underscores larger lessons about the absurdity of governments still citing pre-Information Age rationales to try to hide critical evidence in the era of ubiquitous information technology.

As we've learned over the last few years, the video camera has combined with the Internet to cut through the "fog of war" -- or, more specifically, to eliminate that fog as a an official reason the public can never actually know the real stories of state-sanctioned violence. In the pre-Internet/pre-digital camera era, the government line was basically: "Hey, we'd like to get to the bottom of [insert violent event], but we can never know what really happened, so you'll have to trust the official story." The public was fed this line whether from police officials in the United States when asked about brutality allegations or from the world's dictatorial regimes when the international press has asked about allegations of anti-democratic crackdowns.

But now, when political activists in America can capture police brutality on their portable video cams, or when Iran's pro-democracy protesters can capture the Iranian regime's brutal crackdown on their cellphones, there's far less "fog" for the government to hide behind. More than ever before, there's often a televisual record available to independently confirm, or undermine, the verbal explanations and denials coming from the government suits at the podium. And in a karmic twist, that televisual record is often created by the very Big Brother that then becomes desperate to suppress it -- whether it's a municipal police force's traffic-light-mounted camera inadvertently catching that police force's brutality on film, or the Obama administration's much-touted "real time" video record of the bin Laden assault.

That record, remember, is the property not of the CIA or President Obama or the administration, but of the taxpayers; and again, we need to see it not only to better understand why the White House's official story of events changed so much and not only to see whether our government was deliberately and knowingly lying to us, but also to answer all the important questions of domestic and international law that still remain unresolved.

To be sure, any effort to get the tape out would be met with inane contradictions -- for example, the White House would likely try to double down on a pre-Information Age story ("we can never actually know what happened, so stop asking questions!"). But that explanation doesn't fly after this very same White House spent substantial time bragging about using Information Age technologies to closely monitor -- and therefore document -- the events in "real time."

We'd also be given all the tired "national security" shibboleths. We'd hear, for instance, that the tape can't be released in a way that protects commandos from undue retribution. But just watch an old rap video to see the incredible wonders of face and logo blurring.

We'd also hear the feed can't be released in a way that properly protects state secrets and/or new information about al-Qaida that we need to be classified for purposes of finding the terrorists. But the government is well-skilled in careful redaction, and additionally, if that was a real fear, then the government probably wouldn't now be releasing bin Laden's own videos found in the compound.

And we'd hear the same anti-ogling "we don't need to spike the football" rationale that we've heard from the administration with regard to the bin Laden death photo. But unlike a single graphic image to which that argument may apply, gore on a video can be easily digitally blurred -- and more important, a video includes more than mere viscera. It includes a series of actions.

All of these tropes, of course, are designed to hide the most likely motive for keeping the feed secret: protecting politicians from public scrutiny -- scrutiny of their after-action explanations and their operational orders. And that brings us to the key question: What would we see on the video?

Maybe -- and hopefully! -- the feed would simply confirm the latest iteration of the official story (i.e., story No. 4), or maybe the feed doesn't confirm anything because of the 20-minute gap (and in those two cases, why would politicians not want it released?). Or maybe while those 20 minutes weren't transmitted in real time to the White House, they were still recorded on site and therefore are available for us to see what actually happened, and to therefore verify the official story we're being asked to accept without question. Whatever the case may be, considering how many times the official story of the mission has changed, and considering all the truly important legal/ethical issues the assault involves, we need to see whatever video exists way more than we need to see a photo of bin Laden's mangled head.