Flooding speeds up, but Tennessee city says it's ready 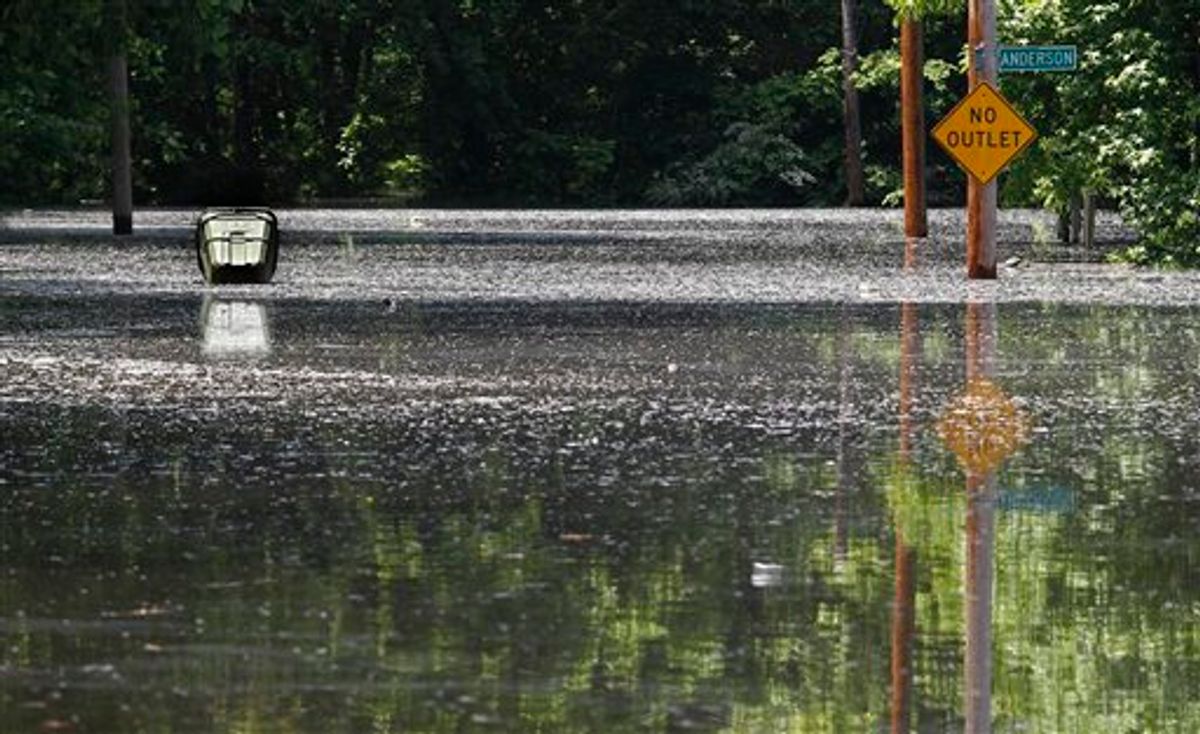 High water cover the road in the Box Town neighborhood as a waste can floats Sunday, May 8, 2011 in Memphis, Tenn. as flood waters continue to rise along the Mississippi River. (AP Photo/Wade Payne) (AP)
--

Forecasters say the Mississippi River could crest late Monday at Memphis -- hours sooner than previously predicted -- but the mayor says the city's ready for it.

Mayor AC Wharton said that despite the tightened timeframe, he's confident that precautions such as door-to-door warnings have prepared the city.

"We don't have as much time, but fortunately we're ready for it," Wharton told The Early Show on CBS Monday.

To the South, authorities in Louisiana stepped up their preparations by opening floodgates at a spillway northwest of New Orleans to take pressure off levees in populated areas. Inmates were also scheduled to be moved from a prison near Baton Rouge.

The Memphis mayor said disasters such as Katrina have shown that you can't simply get the word out by issuing warnings on TV. Authorities spent the weekend knocking on doors to tell a couple hundred people that they should abandon their homes before they are swamped by waters from the rising Mississippi. Wharton said officials are returning to some houses multiple times.

"Door-to-door is a key thing that we're doing," he said, adding there are stepped up patrols to prevent looting in areas where people have left their homes behind.

Forecaster Joe Lowery of the National Weather Service office in Memphis said it looks like the river is starting to level out and could crest as soon as Monday night, at or near 48 feet (14.63 meters). Forecasters had previously predicted the crest would come Tuesday.

Memphis residents have been abandoning low-lying homes for days as the dangerously surging river threatened to crest just shy of the 48.7-foot (14.84-meter) record, set by a devastating 1937 flood.

The swollen river has swamped houses in Memphis and threatens to consume many more, but its rise has been slow enough that some people were clinging to their normal lives just a bit longer.

In all, residents in more than 1,300 homes have been told to go, and some 370 people were staying in shelters.

But while some evacuated, others came as spectators. At Beale Street, the famous thoroughfare known for blues music, dozens gawked and snapped photos as water pooled at the end of the road. Traffic was heavy downtown on a day the streets would normally be quiet.

The river is "probably the biggest tourist attraction in Memphis," said Scott Umstead, who made the half-hour drive from Collierville with his wife and their three children.

Col. Vernie Reichling, Army Corps of Engineers commander for the Memphis district, said the homes in most danger of flooding are in areas not protected by levees or floodwalls, including near Nonconnah Creek and the Wolf and Loosahatchie rivers.

About 150 Corps workers were walking along levees and monitoring performance of pump stations along what Reichling called the "wicked" Mississippi. "There should be no concern for any levees to fail," he said in a downtown park on a bluff overlooking the river.

For Cedric Blue, the flooding in his south Memphis neighborhood near the overflowing Nonconnah Creek is a source of frustration and anger.

Blue, 39, has watched as the water engulfed three homes on his street, including that of an older woman who had to be rescued in a boat because she had refused to leave. Blue fears the rising water will ruin his house and his belongings while washing away a lifetime of memories that were created there.

Sunday afternoon, a garbage can floated in the high water near his house. Some feet away, the water had reached more than halfway up a yellow "No Outlet" street sign.

He became emotional talking about how he has about 7 feet of water in his backyard and less than a foot inside the house, which his mother owns. They were in the middle of a remodeling project when the flood hit.

Blue said he wants the city, county or the federal government to give him a hotel voucher so he does not have to go to a shelter.

"I just want a new life and relocation," Blue said. "I would like the elected officials to come down here to see this with their own eyes and see what we're going through."

Flood waters were about a half-mile (800 meters) from the Beale Street's world-famous nightspots, which are on higher ground.

The river already reached record levels in some areas upstream, thanks to heavy rains and snowmelt. It spared Kentucky and northwest Tennessee any catastrophic flooding and no deaths have been reported there, but some low lying towns and farmland along the banks of the river have been inundated.

And there's tension farther south in the Mississippi Delta and Louisiana, where the river could create a slow-developing disaster.

There's so much water in the Mississippi that the tributaries that feed into it are also backed up, creating some of the worst flood problems so far.

Downriver in Louisiana, the Army Corps of Engineers began opening the first floodgates at the Bonnet Carre spillway about 30 miles northwest of New Orleans. Workers pulled restraining devices off 28 of the spillway's 350 gates, and the corps said it will monitor river levels before deciding to open more.

It's the 10th time the spillway has opened since the structure was completed in 1931.

The corps also has asked for permission to open the key Morganza spillway north of Baton Rouge. Officials warned residents that even if it were opened, residents could expect water 5 to 25 feet (1.5 to 7.5 meters) deep over parts of seven parishes. Some of Louisiana's most valuable farmland is expected to be inundated.

Later on Monday, state officials planned to begin moving some prisoners from the Angola state penitentiary, north of Baton Rouge.

Engineers say it is unlikely any major metropolitan areas will be inundated as the water pushes downstream over the next week or two. Nonetheless, officials are cautious.

Since the flood of 1927, a disaster that killed hundreds, Congress has made protecting the cities on the lower Mississippi a priority, spending billions to fortify cities with floodwalls and carve out overflow basins and ponds -- a departure from the "levees-only" strategy that led to the 1927 disaster