Bush shifted resources from the Osama hunt into a needless war. It's time to wind down both wars now 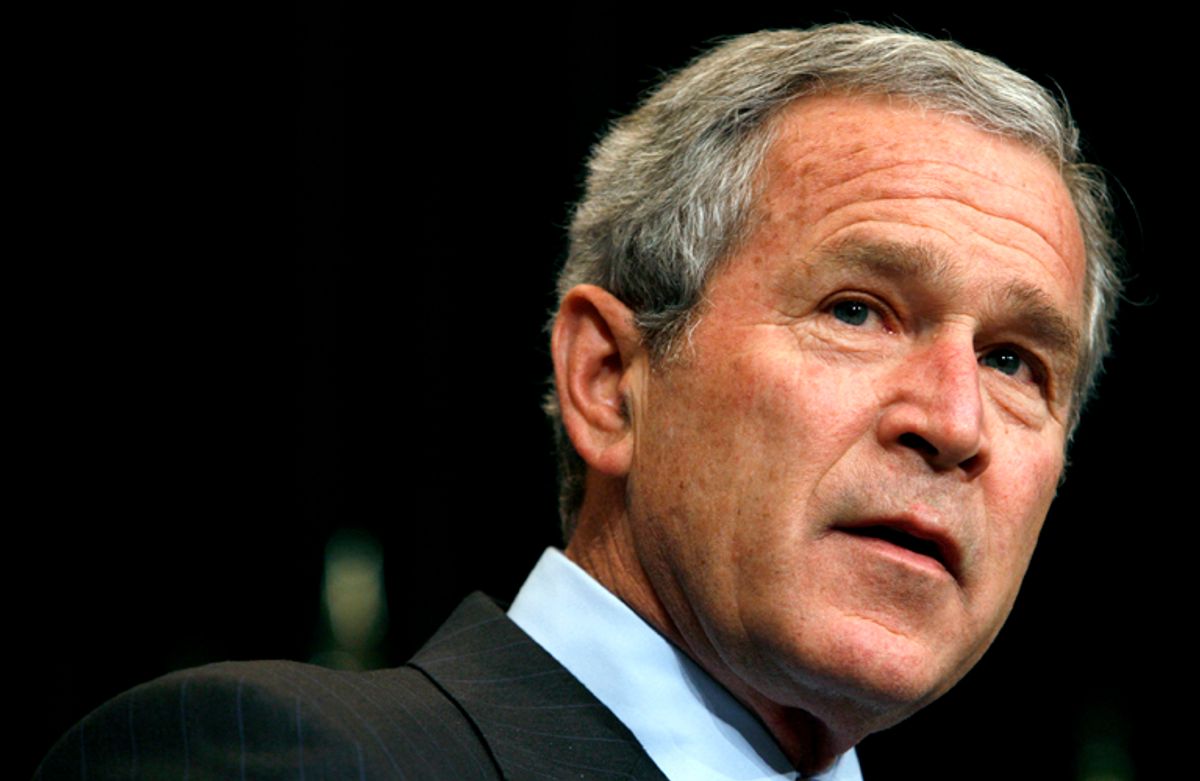 U.S. President George W. Bush speaks to military leaders after receiving a briefing on the war in Iraq during a visit to CENTCOM in Tampa, Florida, May 1, 2007. REUTERS/Kevin Lamarque (UNITED STATES) (Â© Kevin Lamarque / Reuters)
--

One particular statement by President Bush about Osama bin Laden has gotten a lot of play this week, because it encapsulates so much that was wrong with his presidency. You've really got to hear it, complete with frat-boy snorts and chuckles:

Who knows if he’s hiding in some cave or not. We haven’t heard from him in a long time. The idea of focusing on one person really indicates to me people don’t understand the scope of the mission. Terror is bigger than one person. He's just a person who’s been marginalized. … I don’t know where he is. I really just don’t spend that much time on him, to be honest with you.

I was asked to react to the quote on MSNBC last week, and I focused on the rich-kid arrogance and denial you hear in Bush's claim. But in light of revelations about how the Bush administration essentially dropped its bin Laden hunt to plan and execute its war with Iraq, the quote, "I really just don't spend that much time on him, to be honest with you," has a chilling new meaning. It turned out to be true, and who knows how many thousands of Americans, Iraqis and terror victims are dead because the former president changed course in 2002 and made "the scope of the mission" an unrelated and unnecessary war with Iraq.

On Monday the Washington Post reported about a number of times U.S. military officials were asked for troops or equipment to go after bin Laden, and didn't provide it, at least partly because they were distracted by Iraq. The best-known example is when bin Laden was located in a cave in Tora Bora in December 2001. Special Forces requested more troops on the ground, and didn't get them. Pakistani President Pervez Musharraf was asked to move his troops in, and he asked for air cover, and didn't get it. Wendy Chamberlin, then U.S. ambassador to Pakistan, told the Post she later realized Franks was already "planning for Iraq," she said. "Even if he could have helped out, he was already starting to have to reshuffle." Lt. Gen. John Vines told the Washington Post in 2006 that he had troops close to catching up to bin Laden, and asked for drones to cover escape routes. "But only one drone was available -- others had been moved to Iraq," the Post reported. Bin Laden got away.

In light of the way the Bush administration clearly took the target off bin Laden's back, you'd think Bush White House leaders could at least thank President Obama for finishing the job and leave it at that. Instead former Chief of Staff Andy Card chides Obama for taking a "victory lap," while an increasingly irrelevant Dick Cheney told Fox News he's concerned the U.S. isn't using torture and other techniques his team devised:

I still am concerned about the fact that I think a lot of the techniques that we had used to keep the country safe for more than seven years are no longer available. That they've been sort of taken off the table, if you will.

When the president first came into office, he moved to close Guantanamo. He has had to give up on that now. He also suspended the enhanced interrogation program and substituted the provisions of the U.S. Army Manual for that purpose. So, it's not clear to me today if we still have an interrogation program that we can put somebody through should we capture a high-value detainee that had crucial information.

Why is anyone listening to Cheney anymore? Maybe they're not, beyond Fox News.

But the new information about the way Iraq cost the U.S. its opportunity to capture or kill bin Laden much sooner should focus all of us on the need to accelerate the wind-down of the wars in Iraq and Afghanistan. Iraq withdrawal seems to be on target, but today Sen. John Kerry urged the president to move more quickly to withdraw from Afghanistan. "It provides a potentially game-changing opportunity to build momentum for a political solution,"Kerry said at a Senate Foreign Relations Committee hearing. "We ought to be working towards achieving the smallest footprint possible in Afghanistan." Kerry also called spending $10 billion a month on the Afghanistan war "fundamentally unsustainable." It sure is. The president should take this opportunity to move more quickly to get us out of costly, unpopular wars his predecessor began. It's time to invest the "peace dividend" at home.