A hostage the GOP can't kill: Congress will not allow the U.S. government to default 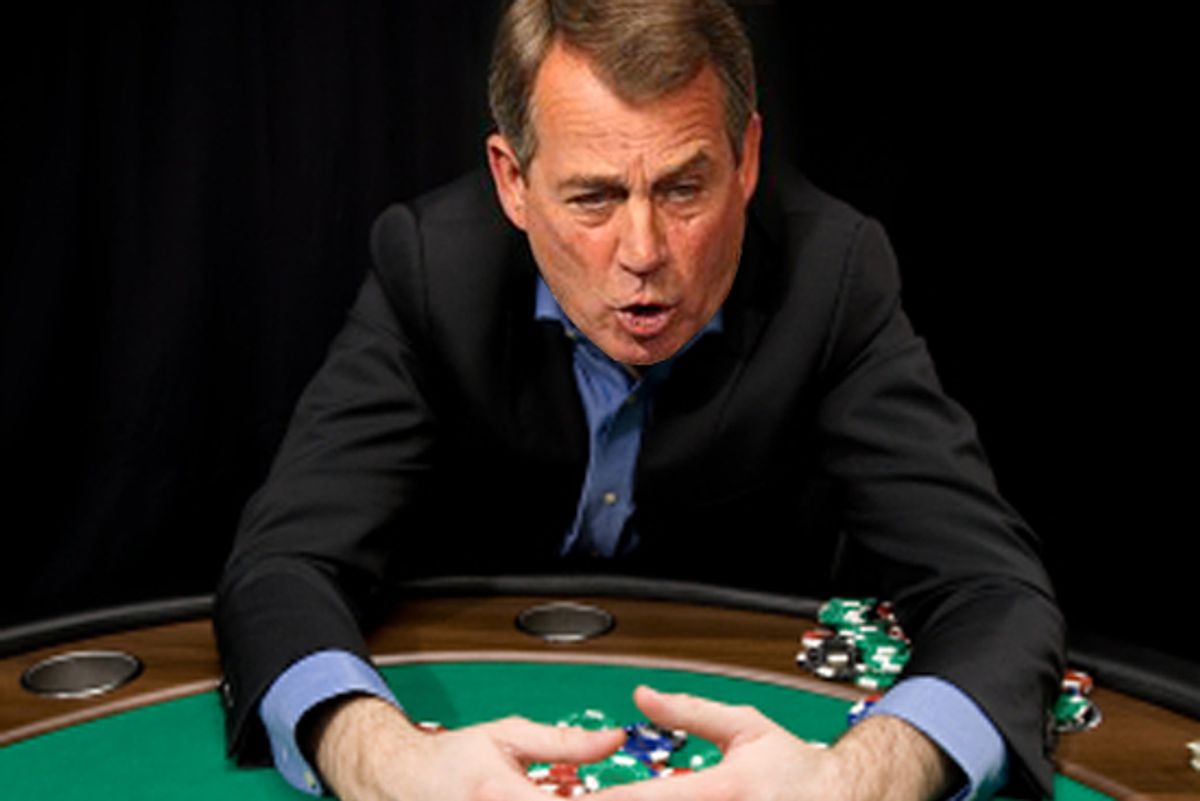 Speaker of the House, John Boehner
--

In exchange for raising the debt ceiling, Speaker of the House John Boehner wants trillions of dollars in cuts. Or so he told the Economic Club of New York on Monday night, as he demanded "actual cuts and program reforms, not broad deficit or debt targets that punt the tough questions to the future."

"And with the exception of tax hikes -- which will destroy jobs -- everything is on the table."

Never mind the fact that "trillions of dollars of cuts" in any accelerated time frame would "destroy jobs" much more efficiently than ending Bush's tax cuts for the wealthy. And it's not even worth pointing out, again, the Republican demagoguery that portrays the statutory end of the Bush tax cuts as wild tax hikes. The speech is most useful in its demonstration of classic Washington politician projectionism: Boehner did not mention under what time frame the cuts should take place nor did he specify where exactly the cuts should come. So who, precisely, is punting the tough questions to the future?

Boehner is bluffing, just as he bluffed, successfully, about the possibility of a government shutdown during the continuing resolution negotiations. But his hand is much weaker this time around, because as he himself has admitted, Congress can't actually allow the U.S. to default on its obligations. That would be an act of astounding political irresponsibility and it's just not going to happen. Boehner also knows as well as any politician that getting the cuts he wants, without any tax "hikes," would require the kind of dramatic changes to Medicare that voters are extremely skeptical of. His obvious hope is that by threatening to hold the debt ceiling hostage, he can get Obama to meet him halfway or more, and thus insulate the Republican Party from the negative political impact of slashing the social welfare safety net at a time of high unemployment.

But bluffs only work when the opponent folds. In recent weeks, after pundits digested the stunning juxtaposition of Obama's decision to release his long-form birth certificate with his White House Correspondent's Dinner comedy shtick while the hunt for bin Laden was going on in the background, there's been a lot of chatter about the president's formidable "poker face." But if the president is really that good at Texas hold 'em, we've yet to see his skill displayed in the ongoing budget negotiations. That's strange, because he definitely has his own cards to play.

It seems to me that Obama's play here is clear: He needs to ask Boehner to spell out his demands. What's the exact bill that Boehner demands as a condition for not crippling the U.S. economy? If he wants to make demands, he needs to write out those demands ...

Allowing Boehner to simultaneously make exorbitant demands, refrain from spelling out those demands, and try to gain bipartisan cover for those demands would be a preposterously weak move by Obama. He can't possibly be that weak a negotiator. Can he?