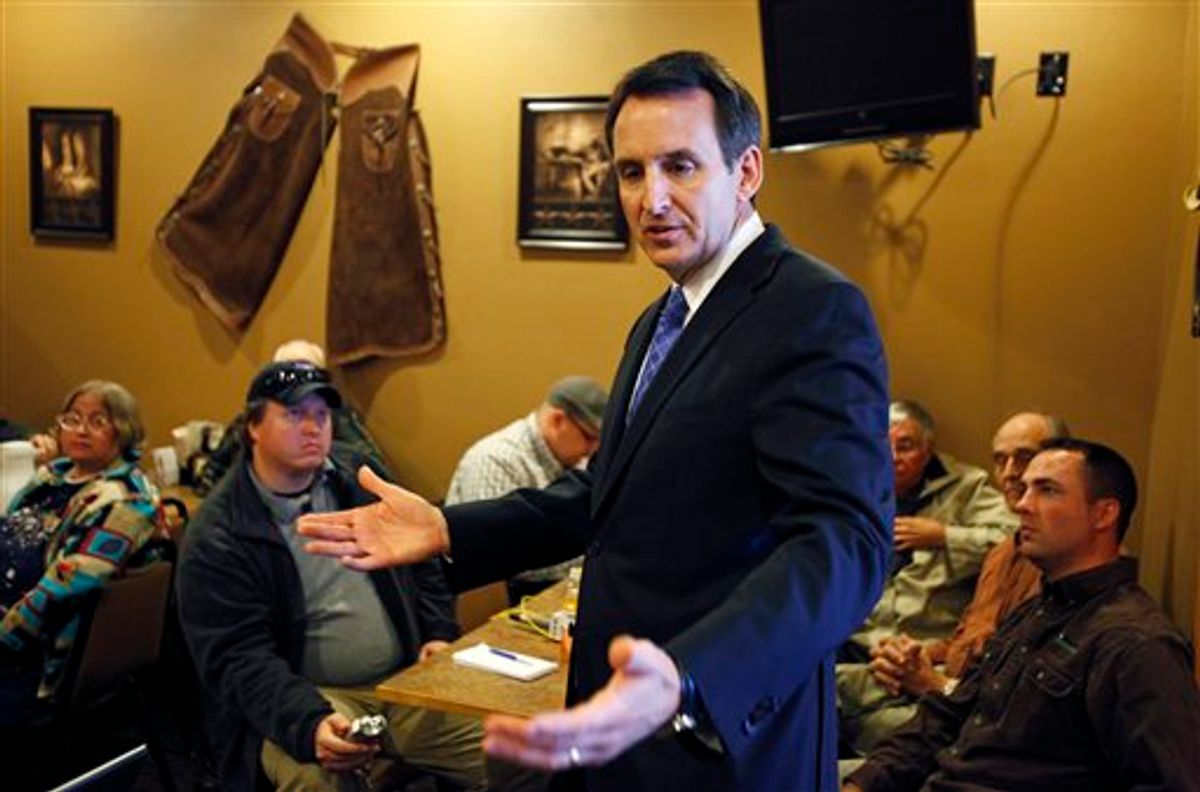 Tim Pawlenty, the former Minnesota governor, would most likely be the front-runner for the Republican nomination for the presidency right now, if John McCain had selected him instead of that Alaska wingnut who looked good on paper. Pawlenty is sort of the perfect running mate, in that he is bland, malleable, and guaranteed not to overshadow or outshine the top of the ticket.

But that didn't happen, and poor Pawlenty, who is clearly working harder at running than anyone besides Romney, is in the basement of every poll. I think it's because if GOP voters want "electable" they'll pick the better-known Romney, and if they want any quality besides that there is still a kaleidoscope of craziness to pick from.

Case in point: With Donald Trump finished, his former supporters are now flocking to everyone else in the field -- besides Pawlenty. Romney gets three additional points, Bachmann adds three points, Gingrich gets two, and poor T-Paw still sits at the bottom.

Here's the problem: At the top of every poll are Mike Huckabee -- who may not even run and who is reviled by much of the Republican Party establishment -- and Mitt Romney -- who is the world's most transparent, unlikable phony. So the Republicans who actually want to win this next election and not "send a message" by nominating some unelectable buffoon are probably going to start trying to convince skeptical members of the conservative movement that backing the guy currently losing in every poll to every other candidate including Ron Paul is a really, really good idea.

That brings us to poor Stanley Kurtz, writing at the Corner, practically begging his friends and colleagues to make Palwenty into a front-runner through sheer force of pundit will:

Are we really so dense — so utterly dependent on the latest news cycle — that we are going to let a major opportunity like Pawlenty slip away out of the misplaced worry that he’s got “no name recognition?”

That is a solvable problem. Just watch: "Hey, Tim Pawlenty was a great conservative two-term governor of Minnesota! He’s tough on defense, conservative on social issues, and well liked by people from both sides of the aisle. He’s faced down Democrats time and again and won. He’s got the biography of a lunch-bucket Democrat and the outlook of a fiscally conservative Republican. And he can win! Yes, Tim Pawlenty can beat Barack Obama in a head-to-head battle for the presidency of the United States. Wake up, Republicans! The answer to your prayers is already running. And if all the pundits would just stop fantasizing for a minute about everyone who’s not running, maybe they’d pay more attention to who actually is."

There, do you recognize Tim Pawlenty’s name now? Well done. Like I said, name recognition is a solvable problem.

When you put it that way, Tim Pawlenty is the perfect candidate! Because he is apparently "Generic Republican"!

The fact that Pawlenty's name recognition is so low, after working so hard, and for so long, to run for president is partly because this far out, the media enjoy focusing on the "funnier" candidates. But it's also a reflection of the fact that the man is incredibly unexciting. People aren't interested in learning about him!

And I'm not sure if all the money -- or exasperated entreaties from Romney- and Huck-hating pundits -- in the conservative movement will change that.