A group of Christian activists believe the apocalypse is May 21. We look at the evidence, and the man behind it 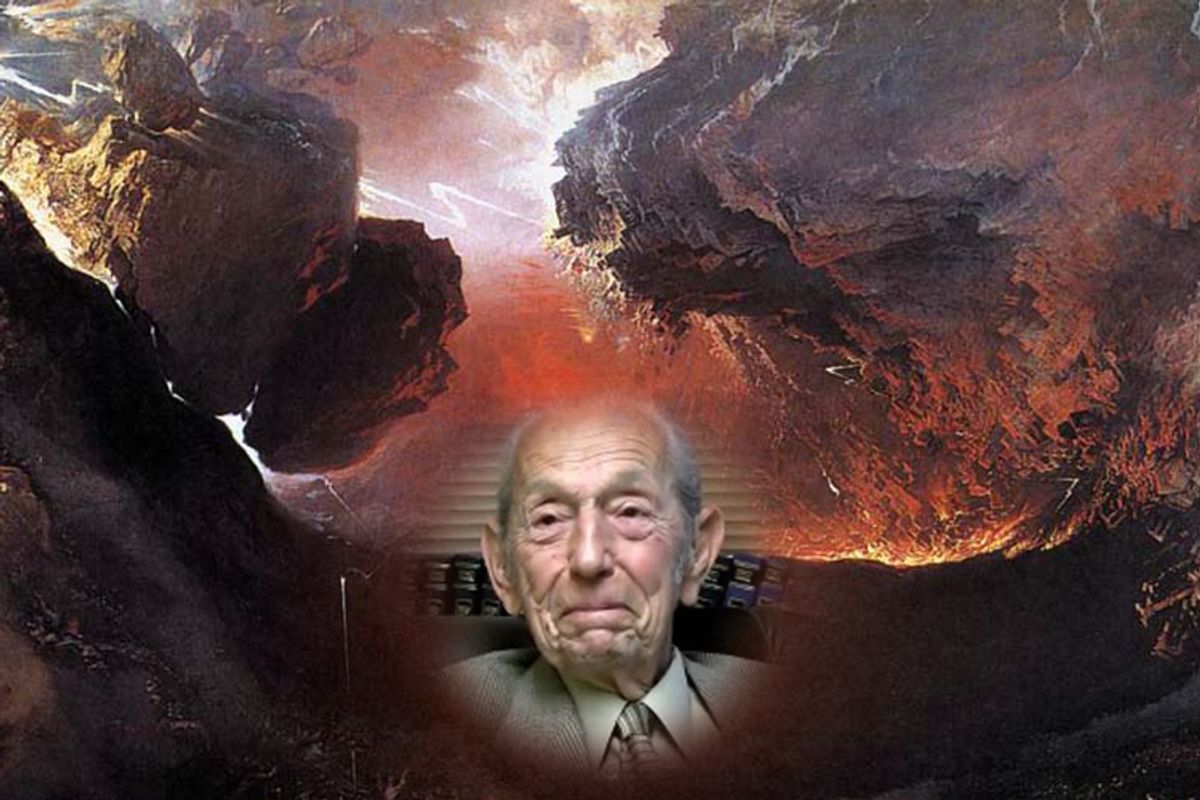 Harold Camping (inset) is the progenitor of the most recent doomsday theory.
--

Spring is finally here -- but apparently, the apocalypse will be fast on its trail. That's the word from a slight but outspoken group of spiritual devotees who believe that the world as we know it is coming to an end.

Maybe you've already encountered the literature: pamphlets, subway ads, billboards on the side of the highway. "Judgment Day is coming" reads one billboard, which features a man praying in silhouette against a sunset backdrop. These are the works of a peculiar breed of Christian activists who've taken to the road to preach their belief in the fast-approaching End of Days. The self-appointed harbingers are not tied to any particular church -- they claim organized religion has been corrupted by the devil -- but rather to Internet- and radio-based ministries. And their lone mission is to tell anyone and everyone that the end of days is May 21. That's when, they insist, God's true believers will be lifted into heaven and saved, during a biblical event widely referred to as the Rapture.

The finer points of Christian eschatology have long been the subject of dispute (not to mention the inspiration for movies and books, like the blockbuster "Left Behind" series). Though mainstream churches reject the the notion that doomsday can be predicted by any man, fringe scholars continue to work feverishly pinpointing the moment of the final, divine revelation. And one such man -- 89-year-old radio host Harold Camping -- has been at the game for decades.

In the early '90s, Camping published a book titled "1994?," which claimed judgment day would arrive in September of that year. When confronted with such a staggering anticlimax -- the world, after all, kept on spinning -- Camping chose not to be discouraged, but to learn from his mistakes. (He hadn't considered the Book of Jeremiah, he says.) A civil engineer by trade, Camping went back to the drawing board and continued to crunch the numbers, before arriving at the adamant determination that Rapture would come on May 21, 2011. He began to spread the word through his broadcasting network, Family Radio, in 2009, and quickly built up a fervid following.

But what, exactly, is his argument? We've compiled an explainer below with all the information you'll need to prepare for May 21.

What happens during and after the Rapture?

In a nutshell: The worthy dead will first rise up to heaven, followed shortly thereafter by about 200 million faithful followers saved by God. Those left behind will endure several months of ghastly torment. And what remains of our fair Earth will swiftly careen toward its ultimate destruction -- which will occur in October.

According to one advocate, Brian Haubert, who was interviewed for a recent article published by NPR:

On May 21, "starting in the Pacific Rim at around the 6 p.m. local time hour, in each time zone, there will be a great earthquake, such as has never been in the history of the Earth," he says. The true Christian believers -- he hopes he's one of them -- will be "raptured": They'll fly upward to heaven. And for the rest?

"It's just the horror of horror stories," he says, "and on top of all that, there's no more salvation at that point. And then the Bible says it will be 153 days later that the entire universe and planet Earth will be destroyed forever."

Why does Camping believe the end is nigh?

Camping and his affiliates present at least three explanations -- what he refers to as "infallible, absolute proofs" -- for May 21 being the day.

Don't past failures at predicting the end of the world give May 21sters some pause?

"It would be like telling the Wright Brothers that every other attempt to fly has failed, so you shouldn't even try," said Chris McCann, who works with eBibleFellowship, one of the groups spreading the message.

What happens if the world doesn't end?

That's a question proponents claim they won't even ponder. (To do so would be to doubt biblical truth and threaten their chances at Rapture, according to at least one telling.) In fact, many who were interviewed by NPR -- one woman who dropped out of medical school; a couple who stand to run out of savings on May 21 -- claim they have no backup plan. While most would say these people are in for a rude awakening, that's not discouraging them in their faith. Only May 21 will tell.