Republicans yearn for a fresh White House option. But are these the choices they're stuck with? 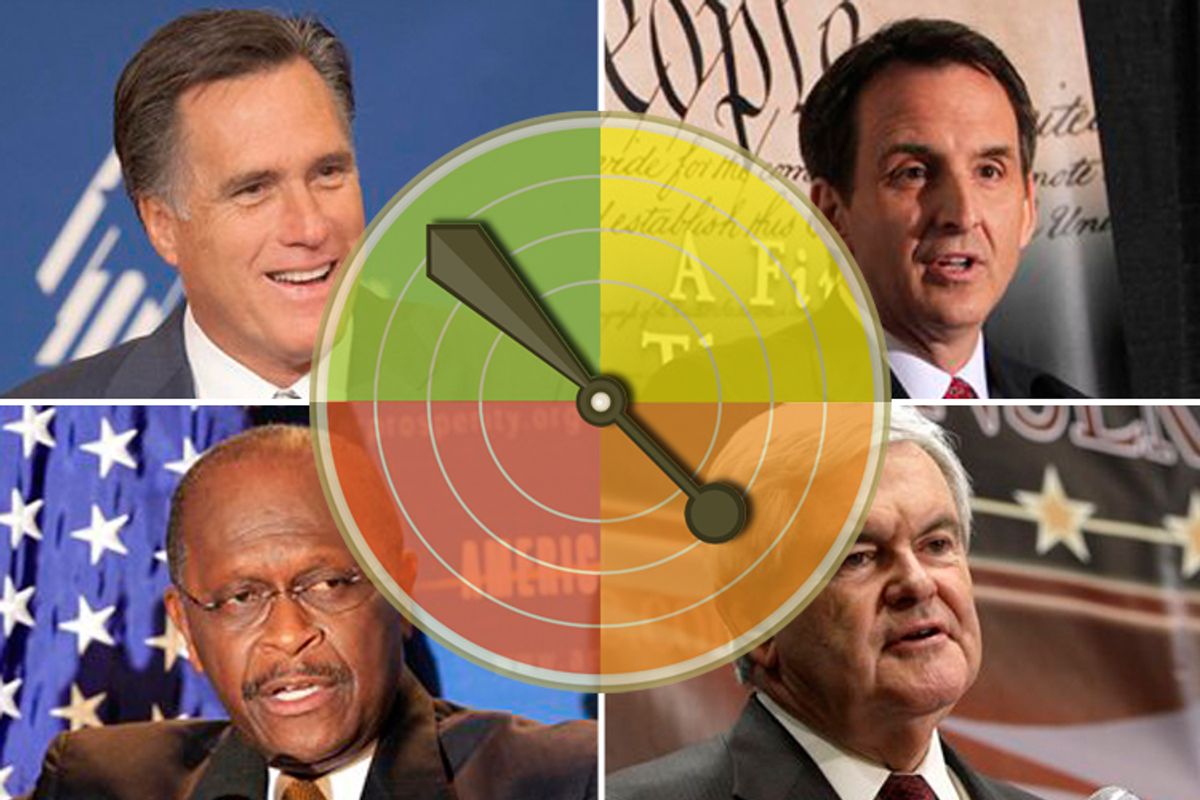 With a presidential field taking shape that is heavy on fringe candidates and light on those with reasonable prospects of capturing the nomination and unseating Barack Obama, the Washington Examiner's Byron York wrote on Monday that Republicans are "hoping that somewhere, somehow, a superhero candidate will swoop down out of the sky and rescue them from their current lackluster presidential field. They know it's a fantasy, but they still hope."

But is it really a fantasy?

I've written before about the dearth of white knight possibilities for the GOP. (And the term "white knight" does not apply to Mitch Daniels and Mike Huckabee (and Sarah Palin, for that matter), who are keeping their distance from the race for right now, and may all end up entering; even accounting for their potential presence, the yearning that York describes endures.) The disastrous elections of 2006 and 2008 took rising Republican stars out of the game and prevented the party from installing promising talent in Senate and gubernatorial posts, from which national campaigns are most frequently launched. But while the Republicans' national bench certainly is thin, it's not empty.

The most closely watched non-candidate right now is New Jersey's Chris Christie, who has -- for reasons having to do with his home state survival -- flatly and repeatedly declared that he won't run. But Christie is also one of the strongest communicators in politics today, and his war with public sector unions and budget fights with Democrats have made him a national conservative folk hero -- so much that a group of GOP fundraisers from Iowa are set to visit Christie in Trenton in an effort to talk him into running. Besides Christie, the name of Jeb Bush still occasionally comes up, even if the baggage of his family name will almost surely keep him from running in 2012. Rep. Paul Ryan has also been mentioned as a potential late entrant, for what it's worth.

If you assume that Bush won't run and that Ryan, as a lowly member of the House, simply doesn't pass the stature test, then Christie really is the only white knight to watch. Skeptics argue that he seems like a formidable prospect now solely because he is so adamant about not running and that he has vulnerabilities that would quickly and easily be exposed as a candidate. They also contend that, due to the realities of modern presidential campaigning, Christie -- who would need to assemble a campaign organization from scratch -- can't afford to dawdle if he does want to run. There's probably some validity to the first point, but on the issue of waiting too long, Christie -- and any other potential white knight that might exist -- may have more time than is commonly thought.

Granted, the history of late entrants in modern campaigns is spotty at best.

In 1976, when Democrats radically expanded their primary and caucus schedules, both Idaho Sen. Frank Church and California Gov. Jerry Brown entered the contest late -- extremely late. Both evidently believed that the old rules -- which allowed candidates to demonstrate strength by entering select contests and to then win the nomination at a brokered convention -- still applied. But they didn't. Both Church and Brown (especially) fared strongly and won states, but Jimmy Carter -- the only candidate to grasp the importance of contesting every single primary and caucus -- had built an insurmountable delegate edge and held them off. 1976 created a precedent for the modern primary era for both parties: Waiting until the action had already begun was too late.

From then on, a "late" entry came to mean late in the calendar year before the primaries and caucuses begin.

In December 1983, for instance, a young Delaware senator named Joe Biden was urged by many Democrats to make a late entry into the 1984 race. The Iowa caucuses were two months off and no clear alternative to Walter Mondale, the former vice president who had locked up virtually every major interest group endorsement, had emerged. Would Biden have filled that void? He decided not to run, so we'll never know -- but it's hard to say it would have been impossible. After all, Gary Hart -- who ultimately became Mondale's chief rival and who nearly stole the nomination from him -- was barely registering in national or early state polls in December '83 and had no money and little organization. But when he finished a very distant second place in Iowa (with 16 percent, compared to Mondale's 49) his campaign became the vehicle for everyone who wanted to deny Mondale the nod. A week later he won New Hampshire, and then 14 more states -- none of which he'd even been organized in as of December '83 -- after that.

Hart himself was a late entrant for the 1988 cycle, although this example comes with an asterisk: He'd started out as the race's front-runner (by virtue of his strong '84 showing), only to see his campaign destroyed by a sex scandal in May 1987. But then, with Democrats bemoaning their field of "seven dwarfs," he jumped back in just before the New Hampshire filing deadline in December '87. At first, Hart surged to the lead in national polls -- and into contention in both Iowa and New Hampshire. But the baggage from his scandal was too much. Raising money and rebuilding a campaign team proved impossible, and his support quickly evaporated. He was a nonfactor by the time Iowa and New Hampshire came around.

There's also the case of Mario Cuomo, who agonized right up until the New Hampshire filing deadline in December 1991 over whether to seek the Democratic nomination. The New York governor passed, literally leaving a plane idling at an Albany airport, and clearing the way for Bill Clinton to become the party's nominee. Perhaps a Cuomo candidacy would have been a disaster. But when you consider the supreme damage that was inflicted on Clinton by several scandals in January and February 1992 (one of which involved a tape recording in which Clinton and Gennifer Flowers derided Cuomo as "Mafioso"), it's very tempting to conclude that Cuomo would have prevailed had he run.

A more successful late entrant came on the Republican side: Steve Forbes, who was a completely unknown magazine publisher when he jumped into the 1996 GOP race in the fall of 1995. By that point, his fellow candidates had been running hard for months; the Iowa straw poll -- at which Phil Gramm scored an upset by tying Bob Dole -- had already been held as had several debates. But Forbes poured millions of his own dollars into television and radio ads promoting his own flat tax plan and denigrating Dole. By mid-January, weeks before the state's lead-off primary, he was running in first place in New Hampshire and had become a genuine national sensation. At that point, Forbes' foes ganged up on him (and the media scrutiny intensified) and his numbers ebbed. In the end, he won 12 percent in New Hampshire, good for fourth place, then scored upset victories in Arizona and Delaware, only to be finished off by Dole on Super Tuesday. Forbes was a flawed candidate, but despite his late start, he ended up faring far better than many of his rivals.

More recently, we've seen Democrat Wesley Clark in the 2004 cycle and Republican Fred Thompson in 2008 also go the late-starter route. Each man's entry was preceded by months of increasingly breathless speculation, and neither came close to living up to the hype (even if Clark did win a state). But was it because they started late, or because they were just lousy candidates?

Maybe Chris Christie would be a dud as a candidate, too. But it's also possible that, unlike (say) Thompson, he'd be capable of living up to the hype. And if he could do that, then it wouldn't really matter if he entered the race now or three months from now -- Republicans would be thrilled to have him.