The Trump campaign is dead 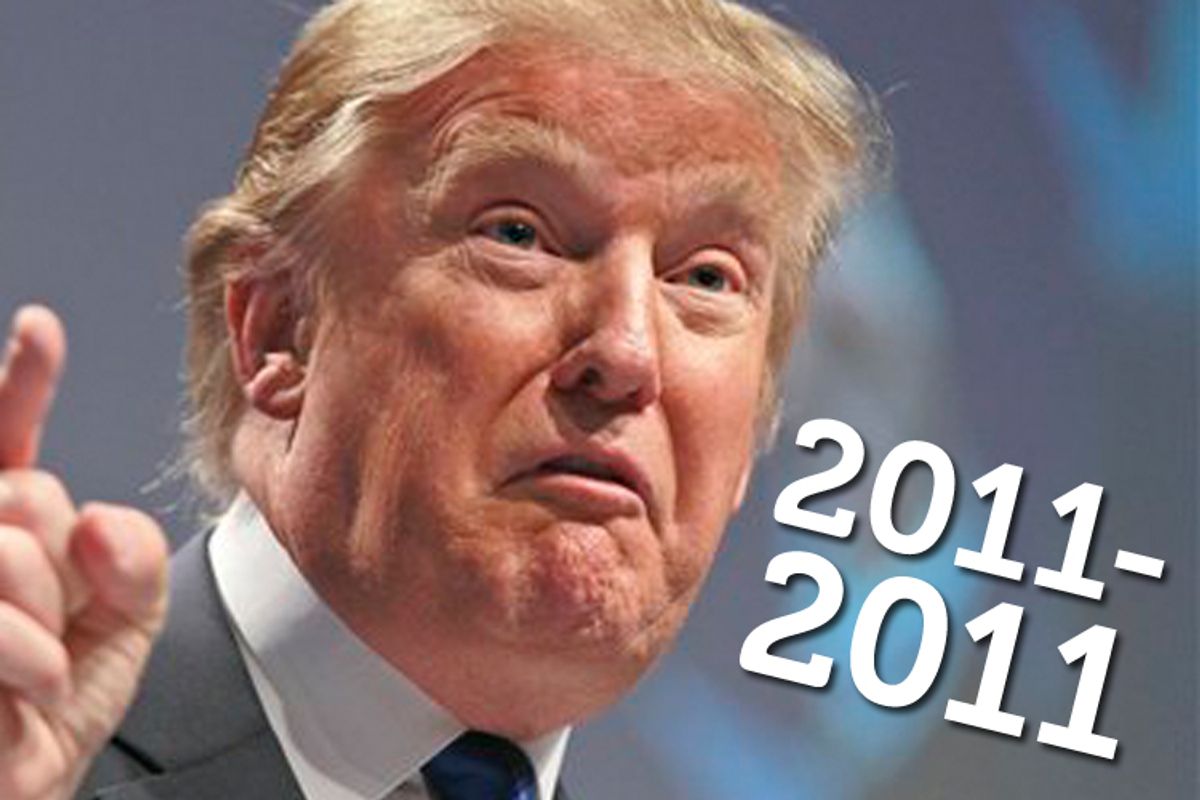 Donald Trump's fake presidential campaign is finished. Not officially (or ... unofficially, or however you classify the de facto end of a fake campaign), but in the only venue that matters when you're still not even close to an actual caucus or primary: the press.

Trump's presidential run is no longer being treated as serious by the easily distracted and resolutely frivolous political press that covered it so thoroughly just a few short weeks ago. While it was always an unamusing joke, the campaign speculation genre dictates that famous fake candidates receive coverage with a level of credulity determined by a complex formula involving the celebrity's Q score, current Nielsen ratings (if any), the early poll numbers of likely non-celebrity candidates, and number of days until the Iowa caucuses. (The celebrity's credibility or odds of actually winning the nomination do not enter into it.) And so, we had what felt like a lifetime of New Hampshire trip coverage and Piers Morgan interviews and "President Trump? It might be more likely than you think!"

Things change. There are many fewer birthers than there were before, and Osama bin Laden is dead, and what passes for serious Republican candidates are forming committees and attending or strategically skipping debates. Mr. Trump, meanwhile, is back to being a television clown. At the moment he is in the midst of the "racial controversy" game that your average B-list reality show personality plays once or twice a year.

On Fox & Friends yesterday morning, Trump called himself the "least racist person there is," which is the sort of quote that sounds like it was constructed by a computer program designed to simulate Donald Trump quotes about race in America. "I have the classiest black friends in the entire world," he didn't add. Some people who've dealt with Trump disagree with his self-assessment, you will probably not be surprised to learn.

Obviously, a man whose entire "campaign" was built on an obsession with proving that the president was secretly born in Kenya and was admitted to "good schools" despite his obvious stupidity solely because he was lucky enough to be born black (and who couldn't have possibly written his own memoir without his villainous white Svengali) is obviously not the "least racist person there is." In fact, I'd guess that he's above the 50th percentile, in terms of racism.

That transparent idiocy didn't cause the press to take Trump less seriously, but it did lead people to gradually grow to hate Trump, which made his ratings suffer, and the exposure of the artifice of the Trump persona was decidedly damaging to his "brand." Once your "brand" has been damaged, say goodbye to credulous political press coverage! (But not the weekly Fox News gig. The more tarnished, the better is how they do things.) Trump has reached the point where he's been uninvited from the sort of stupid celebrity nonsense that stupid celebrities like him live for.

But as we all know, the more you laugh at Trump, the angrier he gets. If we had wanted him to forget about his "political ambitions," like he always does, perhaps we all should've continued indulging them until he got distracted. As it is, now that the media has washed its hands of the false "Trump campaign" he may launch a real one, to prove a point. (The point he will actually "prove" is that not even Republican primary voters are desperate enough to vote for Donald Trump. Not when there's pizza magnate Herman Cain on the ballot!)