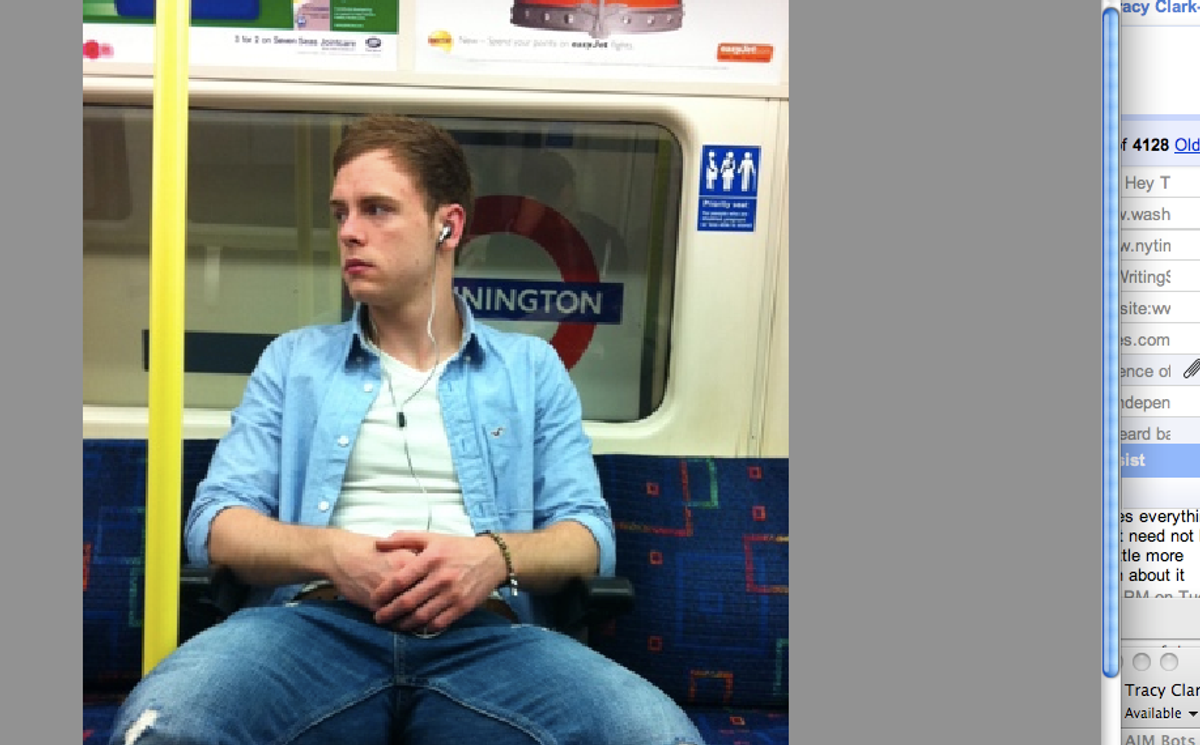 When I hear about candid subway photos posted online, I think of upskirt and down-the-blouse snapshots. Next, Hollaback-style captures of fondlers and flashers come to mind. But a coed group of Londoners is subjecting men to unwitting Internet objectification with TubeCrush.net, a site devoted to hot guys encountered on the Underground. User-submitted shots are posted on the site with some eyebrow-wiggling commentary (e.g. "we just know there is a six-pack under that coat") and visitors can give them a thumbs-up or a thumbs-down.

It's getting a lot of coverage across the pond and, unsurprisingly, stirring up some controversy. The Guardian's Sunny Hundul criticized the Evening Standard's coverage of the site, which he argued was all too flippant and embraced an unfair double standard. He asked, "If the sexes had been reversed, would it have been seen so benign? Probably not." Gail Dines and Wendy J Murphy also targeted the site in a recent Op-Ed:

The recent TubeCrush phenomenon, where young women take pictures of men they find attractive on the London tube and post them to a website, illustrates how easily women copy dominant societal norms of sexual objectification rather than exploring something new and creative.

I bristle at the suggestion that women who sexually objectify men are necessarily "copying" mainstream male sexuality (maybe they're, I dunno, expressing how they really feel). In fact, I'm often tempted to celebrate mildly piggish female behavior -- to a point -- just because it at least contradicts the stereotype that female sexuality is adequately represented by, say, Twilight fan-fiction. (And isn't fan-fiction just another mode of objectification, anyway?) I also happen to think that sexual objectification isn't always a bad thing; it's all about context and consent. (Dines is an anti-pornography activist, though, so we know where she stands on that issue.) It's also interesting to think about the difference between candid shots taken for a street-style fashion blog versus a sexy-person-on-the-train blog: Why does the former seem so much more innocuous and reasonably objectifying?

Now, it's important to point out the crucial difference between the photos that make it on TubeCrush and the explicitly sexual candids -- most often of women -- available all over the Web. These represent very different privacy issues: In one scenario, the one I'm concerned with here, a person's photo is taken in a public space and then broadcast to a whole new audience, and in an unregulated venue for anonymous commentary; in the other case, a clear personal boundary -- like a hemline -- is trespassed in a public space and then the evidence is broadcast to a greater audience. Although, as I've written about before, the law doesn't always distinguish between these two circumstances; there isn't always a "reasonable expectation of privacy" beyond your hemline.

As for these tame shapshots, the legality isn't as much an issue as the creep factor, which is entirely subjective (and not only dependent on the nature of the photograph but also the commentary that accompanies it). One unwitting TubeCrush subject tweeted that he was "5% demeaned, 35% flattered, 60% surprised" to find himself on the site. Now, he doesn't speak for all men, and certainly plenty would find it far more unsettling than flattering, but that's about the reaction one would expect from a straight man who discovers that a woman found him so drop-dead handsome she just had to snap his photo. That's in part because most men are unaccustomed to objectification by women. (For example, after I brought a straight guy friend to a gay male dance club, he told me in awe: "I've never felt so attractive before in my life!")

Women, on the other hand, are trained to be wary of strangers' attention at every turn -- and we know just how quickly compliments on the street or in the subway can become abusive and threatening. That isn't a strong enough defense of a double standard when it comes to candid snapshots, though. Once we move beyond the question of whether women deserve a special pass for piggish behavior, we get to the far trickier privacy issues brought up by technology -- and we'll be trying to untangle those for quite some time to come.

Ultimately, sites like TubeCrush get at an essential truth about the Internet: People like to look at other people. After all, Mark Zuckerberg, King of The Web, got his start with a site that allowed visitors to rate people's attractiveness online without their permission. And it also tells us something about the objectifying nature of human sexuality. As Camille Paglia put it, "Turning people into sex objects is one of the specialties of our species."