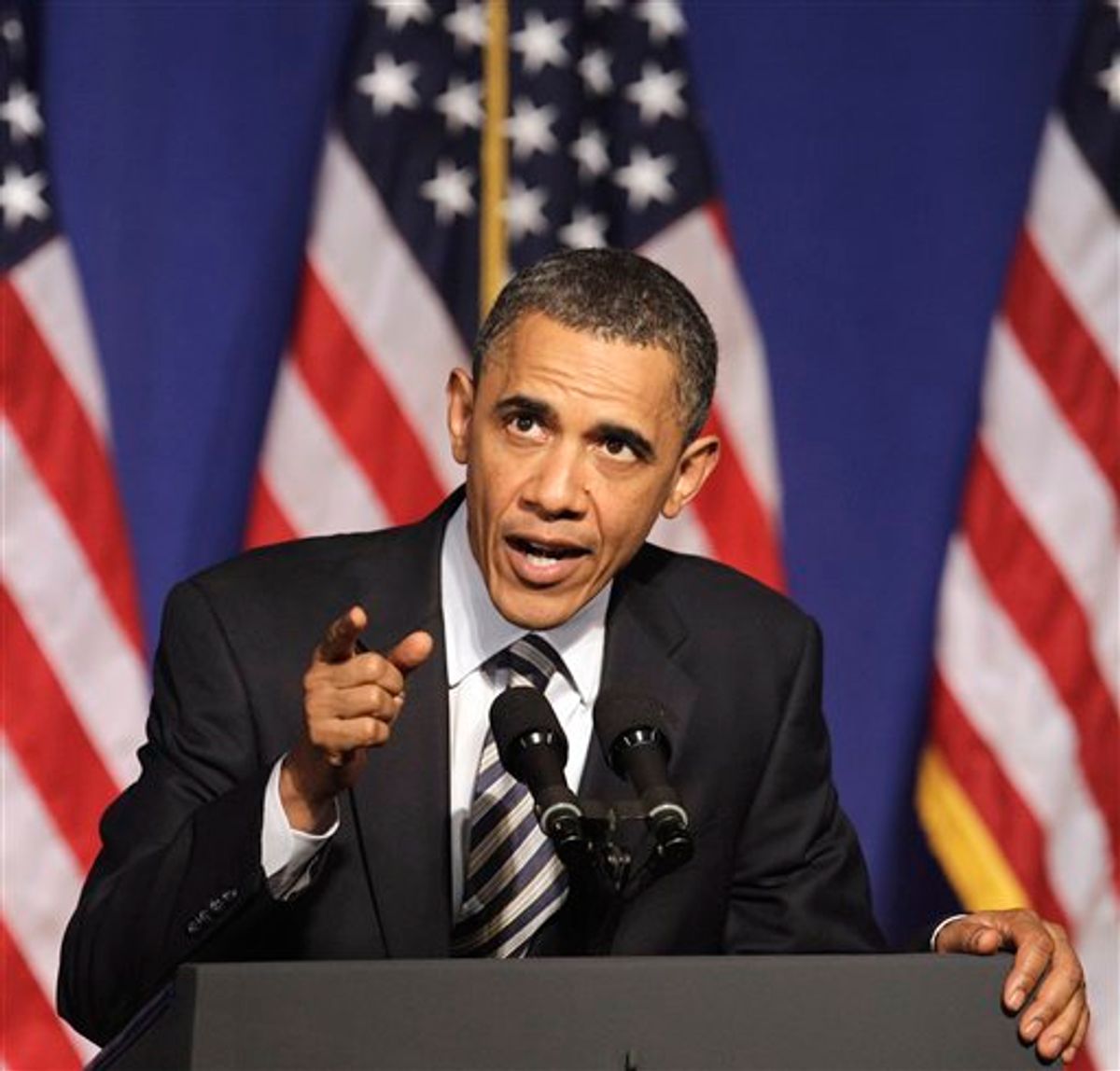 FILE - In this April 27, 2011 file photo, President Barack Obama gestures as he speaks at a Democratic party fundraiser in New York. Unlikely as it may seem, President Barack Obama and Republicans in Congress actually do share some common ground on the need to curb Medicare costs. Embedded in both the House GOP plan to replace Medicare with a voucher-like system and in Obama's counter-proposal is the idea of putting a limit on the growth of the $500-billion program, and making sure it sticks. (AP Photo/Kathy Willens, File) (AP)
--

President Barack Obama is making his first trip as president to the U.S.-Mexico border, using the setting to sharpen his call for a remake of the nation's immigration laws and try to cast the GOP as the obstacle standing in its way.

The president's speech in El Paso, Texas, on Tuesday, and his visit to a border crossing there, are the latest high-profile immigration events by Obama, who has also hosted meetings at the White House recently with Latino lawmakers, movie stars and others.

It all comes despite an unfavorable climate on Capitol Hill, where Republicans who control the House have shown no interest in legislation that offers a pathway to citizenship for the nation's 11 million illegal immigrants.

That's led to criticism that Obama's efforts are little more than politics in pursuit of the ever-growing Hispanic electorate ahead of the 2012 election. White House officials dispute that. They acknowledge the difficulties in getting a bill but say it's likelier to happen if the president creates public support for immigration legislation, leading to pressure on Republican lawmakers.

"We already know from the first two years, the last Congress, that there was political opposition to comprehensive immigration reform, including from some places where there used to be political support," said presidential spokesman Jay Carney. "We are endeavoring to change that dynamic by rallying public support, by raising public awareness about the need for comprehensive immigration reform."

At the same time, the strategy allows Obama to highlight that Republicans are standing in the way of an immigration bill -- shifting responsibility away from himself at a time when many Latino activists say he never made good on his campaign promise of prioritizing immigration legislation early on.

Obama's spotty immigration record in the eyes of Latino voters makes it all the more politically imperative for him to shore up their support with his re-election campaign approaching.

"What's different from 2008 is that there are more Hispanics and more millennials in the electorate overall. Latinos are even a bigger share than they were in 2008," said Simon Rosenberg, a former Clinton White House strategist who follows immigration policy as head of the left-of-center NDN think tank. "Millennials" is a term for people born after 1980.

More Latinos than ever voted in the 2010 midterm elections, according to the Pew Hispanic Center, accounting for almost 7 percent of those voting. Still, turnout among Hispanic voters is far lower than among other groups, giving Obama a reason to want to try to motivate them. He's picked hostile political territory to make his pitch, visiting a state he lost by more than 10 percentage points in 2008. But the trip does have one overtly political upside: Obama plans a side trip to the relatively liberal bastion of Austin to raise money for the Democratic National Committee at two fundraisers Tuesday night.

At the same time, Obama is pitching his immigration argument to the larger public, and he's refining it in a way that goes to Americans' pocketbook concerns. White House officials say Obama will emphasize the economic value of reforming immigration laws, noting that immigrants account for a substantial share of business start-ups and patent applications, among other things -- activities that create jobs for everyone.

It's a different approach than talking about immigration as a security issue or a moral one, and also provides a counter to the Republican argument that illegal immigrants drain U.S. resources.

The president will also argue that his administration has made great strides on border security. Administration officials boast of increasing the number of agents on the border, seizing more contraband and nearing completion of a border fence, and say they plan to extend the deployment of National Guard troops Obama sent to the border. To Republicans who say that immigration overhaul legislation shouldn't happen until the border is secure, the White House now says it's as secure as it's ever been and the conversation on legislation needs to happen.

"It seems President Obama has once again put on his campaigner-in-chief hat. The president's push to legalize millions of illegal immigrants is purely political," said Rep. Lamar Smith, R-Texas, chairman of the House Judiciary Committee. "And even though administration officials like to pretend the border is secure, the reality is that it isn't."

Brendan Buck, spokesman for House Speaker John Boehner, R-Ohio, said that House Republicans had no plans to take up immigration legislation and argued that if Obama were serious about immigration reform he would have reached out to Boehner on the issue, which Buck said he hasn't.

The White House says Obama will push Tuesday for legislation and release a blueprint on his approach to reform, but without setting out any timeline. Indeed, getting immigration reform done any time soon is not realistic. Obama wasn't even able to get legislation through Congress last year that would have provided a route to legal status for college students and others who were brought to the country as children. The so-called DREAM Act passed the House, then controlled by Democrats, but was blocked by Senate Republicans.

The Senate is now even more heavily Republican, and Republicans control the House. That means immigration reform can't happen unless they cooperate.

But for Obama, if the public's aware of that, it's a political win -- even if Republicans don't budge.