"Maybe they'll say we need a moat. Or alligators in the moat," the president said, speaking in El Paso 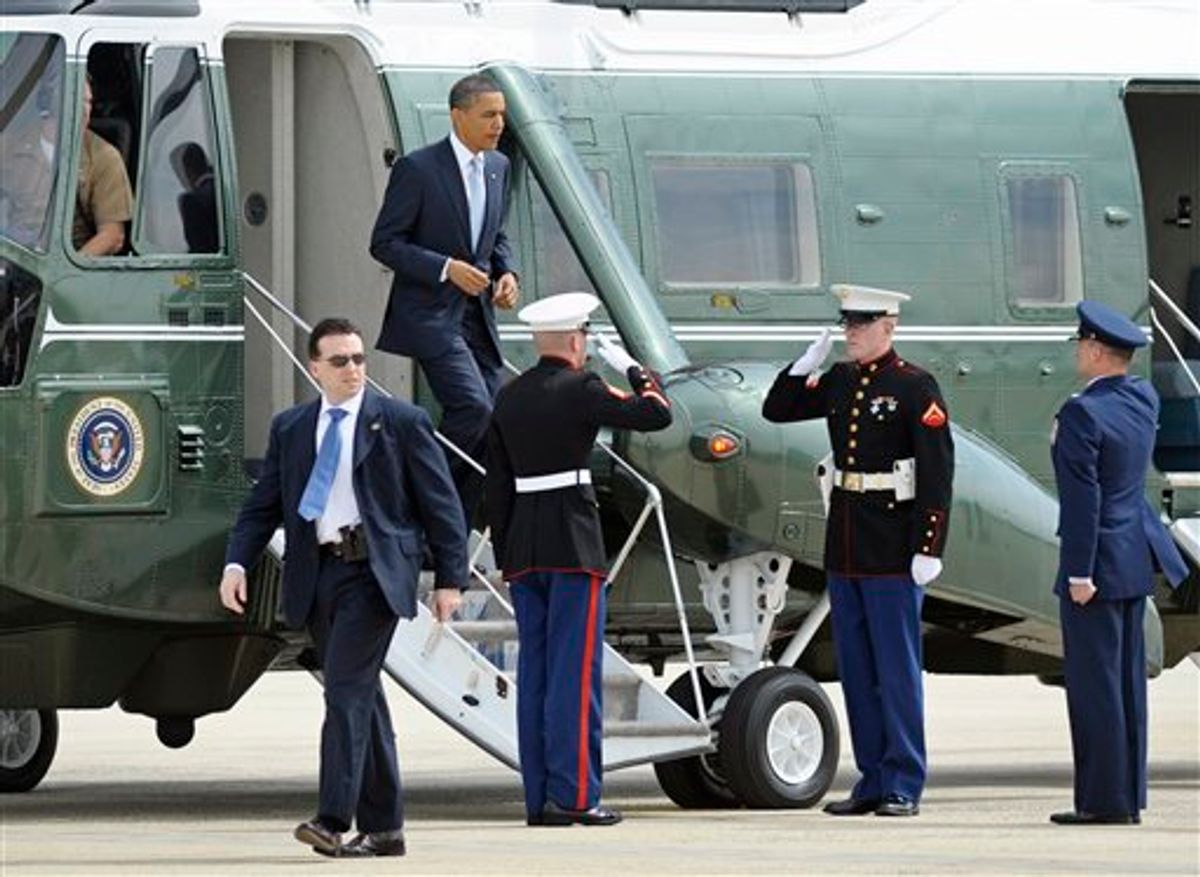 President Barack Obama says his administration has answered the concerns of Republican lawmakers who want the U.S.-Mexico border better secured before they are willing to take on comprehensive immigration reform.

Standing at the border Tuesday, Obama mocked Republicans for never being satisfied and always changing the conditions about what's needed to secure the border. Said the president: "Maybe they'll say we need a moat. Or alligators in the moat."

Obama says that stepped-up enforcement is getting results.

Obama used his speech in El Paso, Texas, to push Congress to work with him on a plan to give millions of illegal residents a path to citizenship.

He also said a burden rests with illegal immigrants to do right by the law. He said they make a "mockery" of all those who try to immigrate legally.

President Barack Obama, visiting the U.S.-Mexico border for the first time as president, is trying to build pressure on Republicans to take on comprehensive immigration legislation -- while showing vital Hispanic voters that he is not the one standing in the way.

Obama's speech in El Paso Tuesday afternoon will mark an attempt by the White House to escalate the debate over immigration despite opposition from majority House Republicans to legislation offering a pathway to citizenship to the nation's 11 million illegal immigrants.

Instead of trying to make deals on Capitol Hill -- even some Republicans who once supported a comprehensive overhaul have turned against it -- Obama is taking his argument to the country, using the singular megaphone of the presidency to try to build a groundswell of support for legislation. He'll declare the border more secure than ever and that it's time to stop arguing about border security and start working on a comprehensive bill.

It comes as many Latino voters, believing that the president never made good on his campaign promise to tackle immigration laws in the first year of his presidency, want to see him do more. They want Obama not just to push legislation but to act unilaterally to slow some deportations, something he has refused to do.

"The approach we are taking is that we are trying to, recognizing the hurdles that we face legislatively, we are trying to build awareness and support for the need for comprehensive immigration reform to fix this broken system," presidential spokesman Jay Carney told reporters traveling on Air Force One to El Paso.

At the same time, the strategy allows Obama to highlight that Republicans are the ones blocking an immigration bill -- shifting responsibility away from himself as his re-election campaign approaches.

But Obama's not putting out a bill or setting a deadline for Congress to produce one, leading critics to dismiss his efforts as little more than politics in pursuit of the ever-growing Hispanic electorate. Latinos accounted for more than 7 percent of voters in the 2008 presidential election, according to the Pew Hispanic Center, and their numbers are greater in certain swing states like Nevada, New Mexico, Colorado and Florida.

The president picked hostile political territory to make his pitch, visiting a state he lost by more than 10 percentage points in 2008. But there's one overtly political upside: Obama plans a side visit to the relatively liberal bastion of Austin to raise money for the Democratic National Committee at two events Tuesday night.

At the same time, Obama is refining his immigration argument in a way that goes to Americans' pocketbook concerns. He will emphasize the economic value of reforming immigration laws, noting that immigrants account for a substantial share of business start-ups, among other things -- activities that create jobs for everyone.

The president will also argue that his administration has made great strides on border security. Administration officials boast of increasing the number of agents on the border, seizing more contraband and nearing completion of a border fence. To Republicans who say that immigration overhaul legislation shouldn't happen until the border is secure, the White House now says it's as secure as it's ever been and the conversation on legislation needs to happen.

"The president's push to legalize millions of illegal immigrants is purely political," said Rep. Lamar Smith, R-Texas, chairman of the House Judiciary Committee. "And even though administration officials like to pretend the border is secure, the reality is that it isn't. ... It is unlikely the president will succeed anytime soon. "

Indeed, getting immigration reform done this year or next is not realistic. Obama wasn't even able to get legislation through Congress last year that would have provided a route to legal status for college students and others who were brought to the country as children. The so-called DREAM Act passed the House, then controlled by Democrats, but was blocked by Senate Republicans.

The Senate is now even more heavily Republican, and Republicans control the House. That means immigration reform can't happen unless they cooperate. Nonetheless, Senate Democrats plan to reintroduce the DREAM Act on Wednesday, with their counterparts in the House following suit. Given Republican opposition the bills likely won't get far, but Obama will try to make certain voters know who to blame.