How I fell for the dark side of Marvel Comics

I was a bullied kid long before the explosion of geek culture. You have no idea what discovering Spider-Man meant 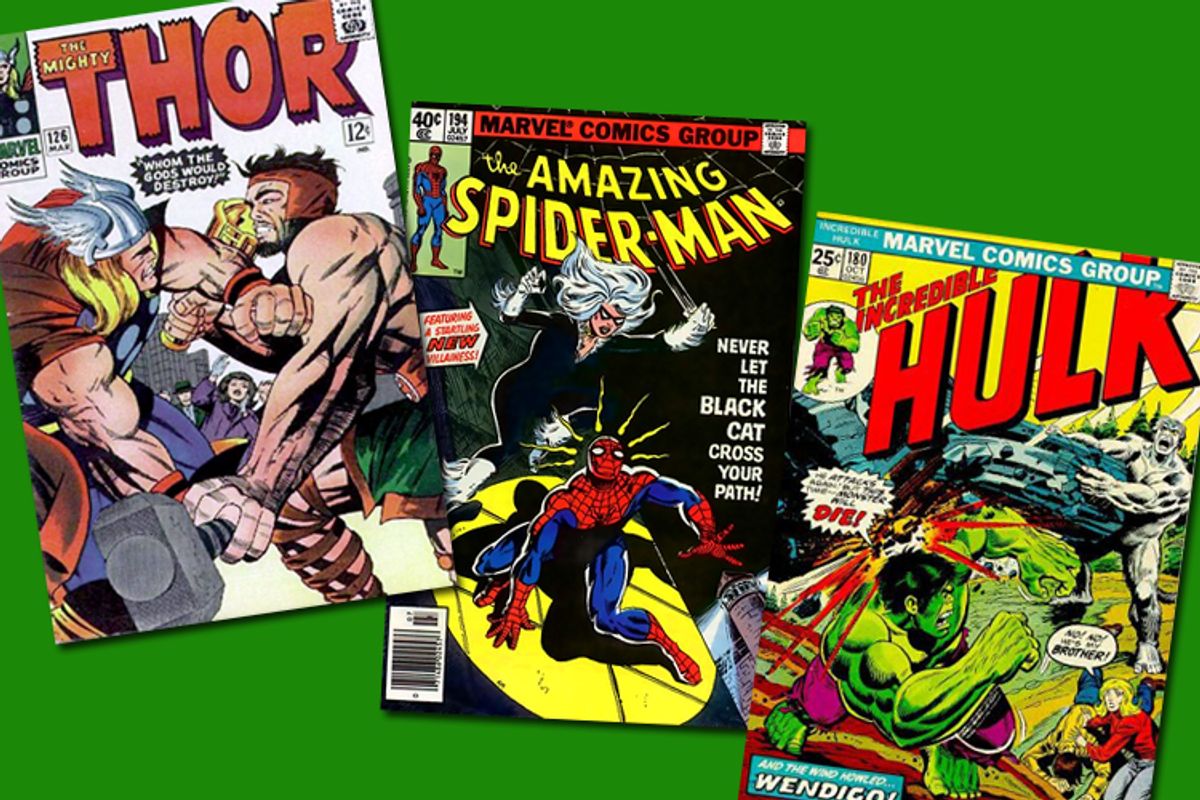 One sunny fall day in Montana, when we were in seventh grade, Rick and I were ambling down the sidewalk with fresh Marvel comic books from Bernie's Pharmacy (purchased a little furtively, because when we'd picked up last month's issues, one of our class's reigning Lords of Cool had smirked: "You guys still reading funny books?")

We were riffling the pages, not really diving into the stories yet, just taking quick nips of the ads or the letter page. Then Rick stopped, and let out this piercing gleeful whistle. He had just read – and then he stopped to read to me – that the Hulk was going to battle Thor! In next month's Journey into Mystery! Talk about Special Announcements!

This was October, 1964, understand. This was before "Star Wars," even "Star Trek." This was way, way before video games, even Pong. Before skateboards, at least in Montana. Rick, our friend Jerry and I didn't ski, or play the right kind of ball, and we knew nothing of the fledgling party scene. We'd never heard of hippies. We'd never heard of "The Lord of the Rings." This wasn't before the Beatles arrival in America, quite, but what Marvel, led by Stan Lee and Jack Kirby, did to comics in the early 1960s has been compared to what the Beatles did to pop. Jonathan Lethem has even written that "Lee and Kirby were a kind of Lennon-McCartney partnership," with Kirby the "raw visionary" like Lennon, and Lee providing sweetness and hooks, like McCartney. Lee and Kirby even had a comparable later acrimonious breakup with Lennon's skewering of McCartney in "How Do You Sleep?" paralleled by Kirby's parody of Lee as "Funky Flashman."

But the analogy breaks down, because the Beatles were everywhere in 1964 and nobody else we knew had caught on to Marvel, least of all the aforementioned and imaginatively stunted Lord of Cool. We pitied him (we didn't call this to his attention, though).

To truly understand the impact of early Marvel on the three of us, you have to know something about DC, the dominant comic book company until then. DC was a hangover from the Fifties, the Flutesnoot-Fonebone-Flintstone Fifties. DC heroes, they had the capes, they had the masks, but they were still off-the-rack brown suits, these guys. DC was pokey, nosy Lois Lane with her pillbox hat.

And no matter the outlandish premise of a DC story, you knew everything would be tidied up by the end, because nothing had been at stake in the first place. DC characters were one-dimensional, cartoons, bouncing back like popup toys. DC stories were cloaked in this leaden whimsicality, defined by lame puzzle stories and hokey mysteries and bad science fiction. For instance, Superman could break the time barrier by flying faster than light: he'd fly clockwise to go into the future, and counterclockwise to visit the past. Of course!

Now, I owe Superman a lot. Superman helped me learn to read, probably. I know for a fact Superman gave me my first big words: not only kryptonite, but invulnerable, and indestructible, too. But we found out soon enough that there was simply no dramatic tension when a hero could do anything -- and I mean anything. None of it added an iota of color to his maddeningly bland DC personality.

DC villains weren't much better. Who even remembered any of Superman's villains, except for Lex Luthor? But villains were integral to Marvel, part of the visceral thing DC was missing, the thing we loved. I still remember my first experiences with particular Marvel comic books by the villains involved: Kraven the Hunter for Spider-Man, the Mandarin for Iron Man, the Grey Gargoyle for Thor. Nothing like a colorful cornball villain for dramatic conflict, as Stan Lee might have said (cornball was one of Stan's words).

Or a colorful cornball hero. Marvel heroes had this gunslinger, chip-on-the-shoulder attitude, and they'd wander from magazine to magazine to take each other on, as in the Hulk-versus-Thor donnybrook Rick and I had so thrilled to anticipate (which turned out to be well worth waiting for, too).

And take the Hulk. The Hulk was this rampaging engine of destruction, sure, but still, deep down, he was basically a nice guy. That is, he was the reverse of how we actually were in seventh grade, me and Rick and Jerry: all too nerdishly nice on the surface, but underneath raging.

Raging, because in our day-to-day lives we were subjected to casual schoolyard violence and related humiliations. We might sidestep, we might negotiate, but sometimes an actual fight happened, messy, clumsy, sweaty, nauseatingly fearful and confusing. So of course we were drawn to the glory of comic book battles, the perfectly framed punches, the clean hard connections, the grace and balance displayed by heroes even in the midst of a complete ass-over-teakettle wipeout.

There was a certain innocence involved in these brawls, and I think we appreciated that. There was rarely any death, rarely any blood. A few cross-hatched bruises, maybe. I remember the Hulk and the Thing squaring off and absolutely trashing several city blocks. However, these blocks just happened to have been slated for urban renewal anyway, and the populace had therefore conveniently been relocated beforehand, so no one was hurt, and not only that, the taxpayer was saved the preliminary demo money.

And it wasn't all brute force. True, the early Hulk could barely talk -- and that was fine. The Hulk smashed. But if we wanted muscular language, a rhetoric of power to play with, well, Marvel could give us that, too. Consider Odin, having gone insane (Marvel heroes periodically went insane, an occupational hazard), observing to Thor: "Have a care, rash youth, for 'twas I gave you godly power, 'twas I made you what you are, for I am the Word, the Will, and the Way!"

Oh my, yes indeed, that was the ticket.

At his best, Jack Kirby came up with grand characters and concepts with an almost disturbingly casual brilliance. He maintained he created the Silver Surfer simply because he was tired of drawing space ships. Kirby's peak may have been the post-Marvel New Gods comics that were raided by no less than George Lucas. Consider and compare. Kirby whipped up a world permeated by a mystical Source. One of his guys was called Mark Moonrider. The archvillain, Darkseid, was secretly the father of a major hero. Sound familiar? (A mystical Force… Luke Skywalker… the archvillain, Darth Vader, secretly the father of a major hero….).

Stan Lee was Kirby's co-creator, balancing Kirby's cosmic grandiosity with a human touch, with a strange NYC Street Corner Wise Guy language all his own, full of references to Basil Rathbone, and Marching Societies, and gruff-with-hearts-of-gold street gangs, and with what Lee himself frankly called soap operas: the Thing brooded about being trapped in a monster's body (can't blame him there); Thor was in love with a mortal, much to Odin's displeasure; Tony (Iron Man) Stark was forced to constantly wear his Iron Man chest plate under his Tony Stark shirt to keep shrapnel away from his heart. Alienation… Love… Mortality… and just as adolescently important, pratfalls. Someone once stole Spider-Man's outfit, so he had to rent a cheapo version from a costume shop, see, and he got caught in the rain, so of course the costume started to shrink, and then….  No way would this have ever happened to Green Lantern.

They always seemed to be having a pretty good time at Marvel, and they invited us to join them. They told us we were heroes of the imagination too, and that we'd be vindicated by the future.

In one odd way this was true… because those comic books turned out to be worth something. For instance, I once purchased a slightly used X-Men #1 (cover date: Sept. 1963) from the Midget Book Store for a nickel (cover price was 12¢). According to a recent Internet check, that magazine would be worth $44,000 (near-mint) these days. Can't beat an investment that appreciates 88 million per cent in not quite fifty years.

But of course my X-Men #1 was nowhere near near-mint condition, even when I bought it from Midget. The first time we heard of anyone sealing their comic book collections in special plastic envelopes, and never reading them -- well, that seemed sick. This smacked of decadence (although we didn't know the word then).  We collected comic books too, but we also spilled Pepsi on them, slept with them, letting our flashlights run down under the covers. We argued about them: as far as I was concerned, Captain America was nothing more than a cold fish wrapped in a flag, but he was Jerry's hero.

We traded comics so aggressively with each other we sometimes reached the point of reciprocal thefts. And we read them over and over, and we copied the art, and we made up heroes and powers and plotlines of our own. In my house, the comic book collection was in a great moldering cardboard box in the closet, a colorful, fantastic, compost heap. My mother eventually threw everything out – including X-Men #1 – years later while we were off doing God knows what else.

But by then, Rick, Jerry and I had drifted, away from comic books and each other. Our last hurrah together was likely the Night of the Lime-Flavored Vodka, New Year's Eve, 1969, and Marvel was not the prime topic of the occasion. Jerry eventually moved to Arizona and that was the last I heard of him. Rick converted to Mormonism, joined the Army, and became a colonel in the Chaplain Corps. And I went through plenty of weather of my own.

And of course comic books themselves changed. Dipping into them now, one might conclude that the entire genre had jumped a very dark shark indeed.

James Rocchi has written that in Watchmen "the violence and sex are self-contained cultural critique[s] of the flaws and failings of comic books."

Say what, Jim? The flaws and failings of… comic books?  Really? What were comic books supposed to be, what ideals had they fallen short of that they needed to be excoriated by any sort of "cultural critique," self-contained or not? You might just as well plan a grand exposé of rock and roll, then. You might as well deconstruct a daydream.

Musing over Spider-Man's origin, Stan Lee once remarked we were lucky our hero hadn't received his radioactive bite from some other creature more likely to be hanging around a lab than a spider. Can you imagine, he continued, marveling over the adventures of the "Amazing Hamster-Lad" or the "Utterly Astonishing Guinea Pig Boy?"

And Rick, Jerry and I knew what we were up to, back then. We were reading comic books, that was all, but they were very good ones indeed, and just what we needed, at the dawn of the Marvel Age.