Gadhafi forces pushed back from Misrata 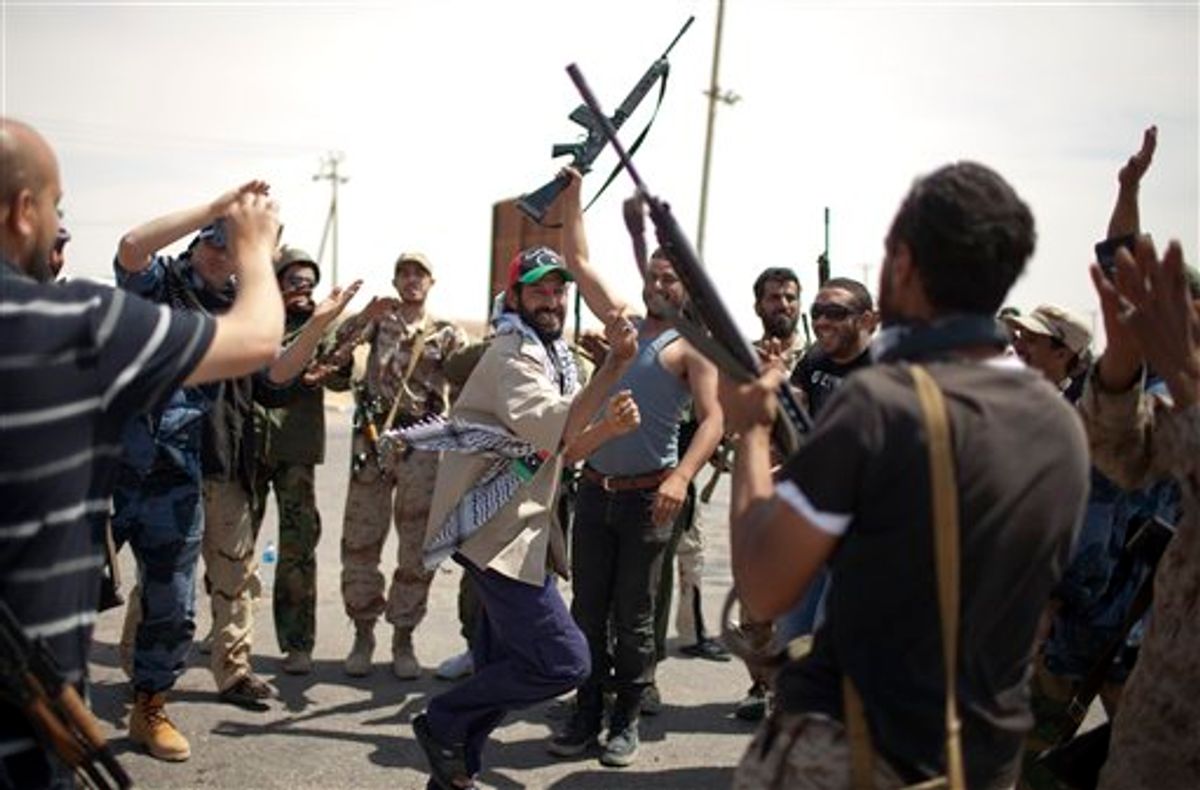 Rebels in the port city of Misrata said they took over the local airport Wednesday from Moammar Gadhafi's retreating forces, and seized weapons and ammunition, a potentially major breakthrough in efforts to break a two-month siege.

The reported rebel advance was the latest in a sudden flurry of accounts of opposition victories, coming in tandem with intensified NATO airstrikes on Gadhafi's forces in several regions. Even though some of the combat reports are difficult to confirm, they seem to represent a major boost for the rebels prospects' after weeks of stalemate in their effort to end Gadhafi's 42-year rule over Libya.

According to a rebel who identified himself as Abdel Salam, rebels were in total control of the airport in Misrata's southern outskirts after two days of fighting. He said five rebels were killed and 105 injured.

"This is a major victory," he said. "The Gadhafi forces have been suffering lack of supplies ... Their morale was very low after being defeated several times and pushed back."

Misrata rebels are also pushing west, toward the nearby city of Zlitan, and then advance farther in the direction of the Libyan capital, Tripoli.

"The main goal is to topple down the tyrant and to liberate the capital," Abdel Salam said. "Now Misrata is free ... Gadhafi can't get in here."

The only rebel-held stronghold in western Libya, Misrata is about 125 miles (200 kilometers) southeast of Tripoli. The rebels control most of eastern Libya.

Since the uprising against Gadhafi began in mid-February, Misrata has endured some of the country's most violent battles. Regime troops surrounded the coastal city from three sides and subjected it to daily shelling.

Residents-turned-rebels mobilized to fight back, pushing Gadhafi's troops from the city center in late April. That battle and others have killed hundreds -- many of whom were buried hastily or merely left where they fell.

Another front where the rebels claim recent gains is near the eastern city of Ajdabiya. Rebels at a checkpoint outside the city indicated fighting had subsided on Wednesday after a stretch of heavy ground combat that was coupled with NATO airstrikes.

NATO said Tuesday it had conducted more than 6,000 sorties since it assumed command of the aerial operation over Libya on March 31. More than 2,400 of those were airstrikes, a statement said.

It said alliance warplanes struck six vehicle storage depots near Tripoli on Monday, along with a surface-to-air launcher and an anti-aircraft gun. Four ammunition depots were also hit in other parts of Libya.

A rebel website, freelibya.com, said there were unconfirmed reports that opposition fighters seized a police station in Tripoli. There was no immediate comment from Gadhafi's regime.

In Geneva, U.N. Secretary-General Ban Ki-moon called for "an immediate, verifiable cease-fire" in Libya, and said Gadhafi's government had agreed to another visit by a special envoy.

Ban said he spoke with Libya's prime minister by phone late Tuesday to urge a cease-fire and demand unimpeded access for U.N. humanitarian workers in Libya. He also called on Gadhafi's forces to stop attacking civilians.

Ban said the prime minister, Baghdadi al-Mahmoudi, agreed to receive a special U.N. envoy who would now travel to Tripoli to undertake "negotiations for a peaceful resolution of the conflict and unimpeded access for humanitarian workers."

Michael reported from Cairo. Michelle Faul in Ajdabiya, Libya, and Slobodan Lekic in Brussels also contributed to this report.