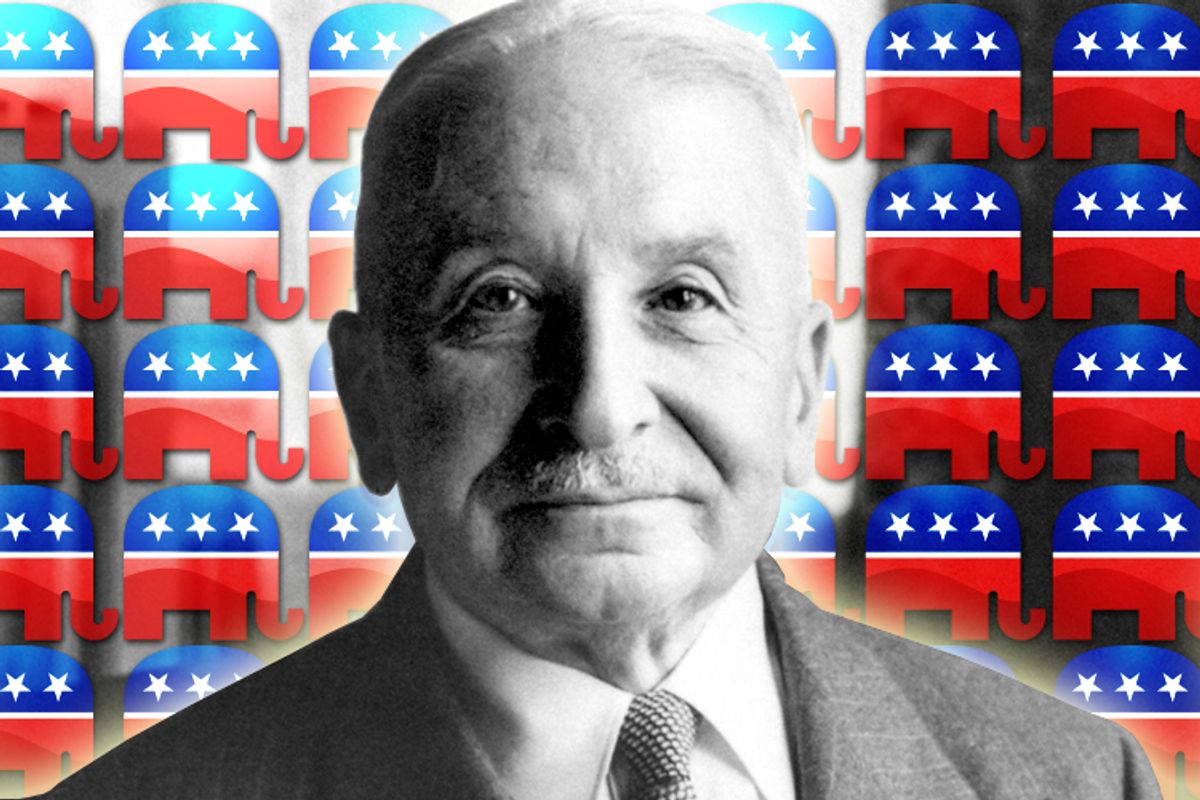 Once upon a time, conservatives leaned upon the weight of the formidable brainpower assembled at the mighty University of Chicago economics department as they furiously defended free market orthodoxy against the pointy-headed Keynesians who lurked at MIT, Berkeley and Harvard. But for today's GOP, even the legacy of Milton Friedman isn't enough. For Republicans like House Ways and Means Chairman Dave Camp, the true standard-bearers of laissez faire purism can be found at tiny campuses such as Michigan's Northwood University, where followers of the Austrian economist and paleolibertarian hero Ludwig von Mises eye any government intervention in the economy -- any intervention at all -- with baleful glares. Friedman? He's practically a socialist!

OK, it's possible that Rep. Camp might not actually be conversant with the business cycle theories of von Mises, but let's follow the trail of evidence. On Monday, reports the Hill, while pushing the popular House GOP line that the debt ceiling shouldn't be raised, period, Camp tweeted a link to a story by NBC25 anchor Dan Armstrong published at ConnectMidMichigan.com, "Should federal government raise debt ceiling? Local economists say 'no.'"

Secretary of the Treasury Tim Geithner says the U.S. should be allowed to borrow more, but many economists and Republicans say it's a bad idea.

How many economists, exactly? Well, just two actually -- and both of them happen to be employed at Northwood University, an educational titan described by one of the economists quoted in the article as "a private institution of higher learning dedicated to the principles of individual liberty, the free market, and limited government."

Northwood's credo has resulted in ample support from such conservative philanthropists as Amway founder Richard DeVos. With campuses in four states but a total student body around the size of a large high school, Northwood University was memorably described in an entertaining Texas Monthly article in 1986 as an institution for "those who find Southern Methodist University too liberal."

This characterization is amply justified by a look at the curriculum vitae of professor Richard Ebeling, who was quoted in the ConnectMidMichigan story and who will be testifying Wednesday at a hearing before the House Financial Services Subcommittee on Domestic Monetary Policy and Technology (chaired by Rep. Ron Paul) "on the role of debt in the monetary system." Formerly the Ludwig von Mises Professor of Economics at Hillsdale College, Ebeling is a strong advocate of a return to the gold standard and the author of several books on "Austrian economics." For Ebeling, the accusation that President Obama is attempting to lead the United States down the path to socialism is moot: We are all already socialist -- the mere existence of the Federal Reserve proves it: "Central banking is monetary central planning," writes Ebeling. "The United States and, indeed, virtually the entire world operate under a regime of monetary socialism."

Austrian economics may not command the respect of anything close to a majority of mainstream economists (whether they lean toward Friedman or Keynes) -- but it more than makes up for this sad reality via the intensity of its adherents, who are clearly attracted by the intellectual rigor of its hardcore rejection of the notion that the economy should be managed by government under any circumstances. As Mises himself wrote, in "Causes of the Economic Crisis: an Address," a tract responding to the Great Depression published in 1931, the best economic guidelines included abandoning "the pursuit of policies which seek to establish interest rates, wage rates and commodity prices, different from those the market indicates."

When recession hits or a financial crisis threatens, Austrian theory demands, as summarized by the Financial Times' Martin Wolf, "that the right response is to let everything rotten be liquidated, while continuing to balance the budget as the economy implodes." Other elements of hardcore Austrian economics include a return to the gold standard, a free market in competitive currency creation (that is, no government monopoly over the printing press) and, of course, no central banking whatsoever. The core belief: Government creates the ups and downs of the business cycle.

Whether this is true or not is controversial. Long before he graced the pages of the New York Times on a regular basis, Paul Krugman famously declared in Slate that Austrian business cycle theory is "a theory that I regard as being about as worthy of serious study as the phlogiston theory of fire." This has caused fans of Austrian economics to write many unkind things about him. Even Milton Friedman, in an interview with Reason, recalled being somewhat annoyed when Mises stormed out of a meeting of economists who had been talking about the proper levels of taxation with the angry declaration that "you are all socialists."

But the correctness of Austrian theory is beside the point. Because if it was ever applied in practice by actual politicians, the voting public would become more than just annoyed. If the response of the Bush and Obama administrations to the financial crisis of 2007-08 had been to allow every beleaguered financial institution to go bankrupt while simultaneously endeavoring to balance the budget while government revenues tanked and social welfare obligations spiked, the economic devastation would have been well nigh unthinkable. There simply would be no political future for politicians who simply abandoned the general public to the viciousness of the free market.

Economic crises and bank panics predated the creation of the central bank in the United States; indeed, to many observers, they seem to be endemic to capitalism and unregulated markets. And when markets run completely amok, the public expects its leaders to do something. Dave Camp is well aware of that. He voted for the Bush stimulus in early 2008, for TARP and the bailout of GM and Chrysler. And he'd do it again, if he had to. We expect our government to govern, and if it doesn't, we'll get another one that does.