Seeing "Bridesmaids" is a social responsibility 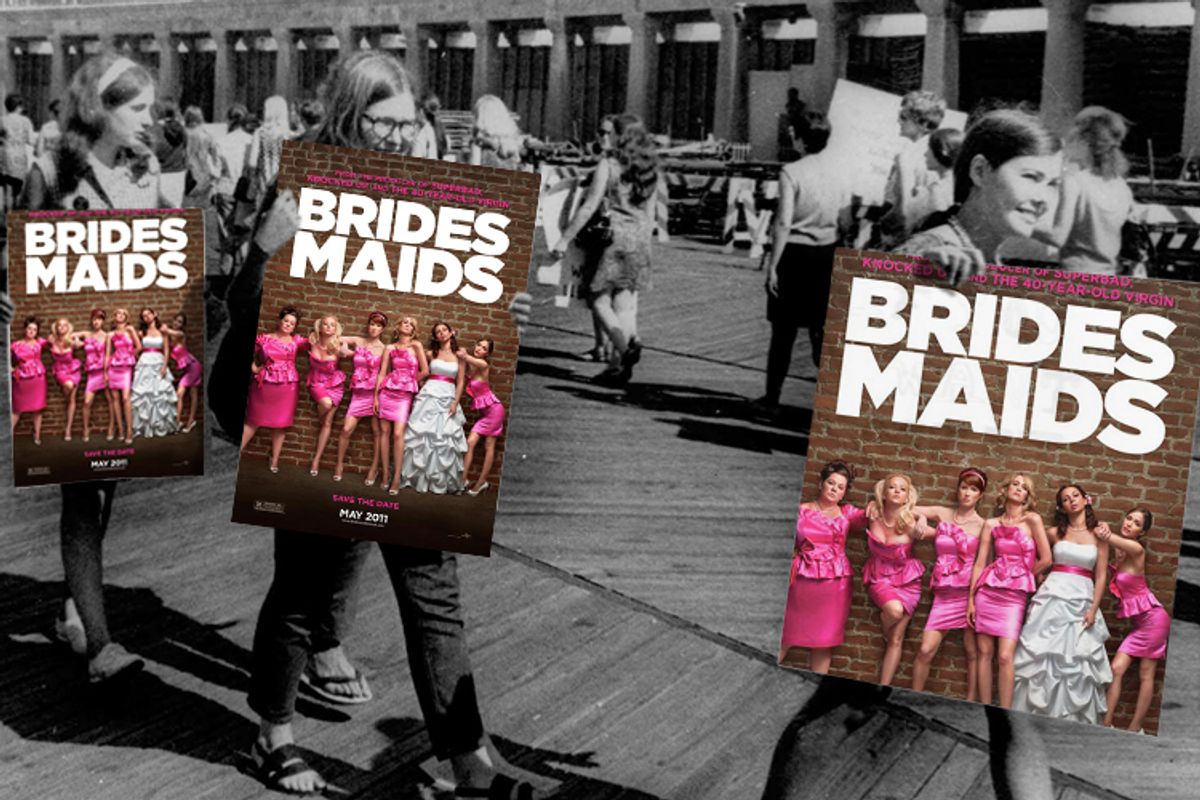 It's a strange day when our social movements coalesce around a movie comedy that appears, from its trailer, to hinge largely on an explosive farting scene, but Hollywood's warped gender politics seem to make each day stranger than the last.

This week, with a viral enthusiasm usually applied to marches on Washington, grass-roots presidential campaigns or saving Planned Parenthood from House Republicans, women (and men) who believe in a future that includes movies for and about women have turned the comedy "Bridesmaids" -- written by "Saturday Night Live's" Kristen Wiig and her collaborator Annie Mumolo, and starring a passel of funny women -- into a cause. "Bridesmaids" activists want to send a bracing message to a business that has become increasingly oppressive for the women who work within it as well as for those who consume its product. That message must be delivered in the form of box office receipts, which means that for a certain set, seeing "Bridesmaids" this weekend -- and encouraging others to do the same -- is more than a trip to the theater; it's a social responsibility.

"Hey A Lot Of Ladies," began a mass email I received on Wednesday from Emily Bracken, a writer and acquaintance. She was forwarding a message from Kirsten "Kiwi" Smith, a producer and the screenwriter of "Legally Blonde" and "The House Bunny," who has no professional connection with "Bridesmaids" but is nonetheless agitating on its behalf. "I know you get a lot of emails about donating money to worthy causes, but I'd like to draw your attention to one in particular: The Chick Flick," Smith wrote. "It is currently on the Motion Picture Association of America's list of Endangered Species and it faces extinction if we don't act now."

Urging everyone to buy tickets to the movie, Smith continued, "Let's show the planet we are capable of queefing out some major box-office lady-power."

Bracken added her own message on top of Smith's. It read, in part, "I encourage each and every one of you to see 'Bridesmaids' this weekend, not just because it's hilarious, but because we MUST show Hollywood that women DO want movies that are not vapid romcoms or something about shopping ... A lot is riding on this movie. So please bring your girlfriends, boyfriends, husbands, and neighbors out in droves. And please, if you feel moved, encourage others to do so, as well."

Yes we can … buy tickets to a Kristen Wiig movie in an effort to persuade Hollywood that multidimensional women exist, spend money and deserve to be represented on film.

What's motivating this campaign is simple: Hollywood studios do not make comedies for or about women anymore. Yes, they used to. As recently as a few decades ago, when comedy stars like Lily Tomlin, Bette Midler and Goldie Hawn stalked through theaters alongside supporting players like Teri Garr, Carol Kane and Madeline Kahn, bringing us movies that were sometimes sublime and sometimes disposable, but which had women at their heart. Think "Private Benjamin," "9 to 5," "Outrageous Fortune," "Down and Out in Beverly Hills"…

Those days are long gone, and we now inhabit an entertainment universe in which everything male-centered is standard, and everything female-centered is female (yes, this dynamic extends into publishing, politics and professionalism, but for now, let's keep it to Hollywood). What that means in practical terms is that women will plonk down dollars to see a male-dominated action movie, a girl-gobbling horror flick, or a dude-centric comedy just as easily as they'll pay for the kind of female-fueled movie that is literally made for them. Men, meanwhile, have apparently been so conditioned to find anything female emasculating (notwithstanding the expectation that their girlfriends find anything male, including "Thor," scintillating) that they cannot be moved to sit through any movie with a fully developed woman at its center. As Tad Friend recently put it in his New Yorker profile of the actress Anna Faris -- in a sentence mentioned frequently by "Bridesmaids" activists -- "Studio executives believe that male moviegoers would rather prep for a colonoscopy that experience a woman's point of view, particularly if that woman drinks or swears or has a great job or an orgasm."

So studio executives simply don't make movies, and especially comedies, from a woman's point of view anymore. Which doesn't even make that much economic sense, given the fact that even without a male audience, women are so powerful a consumer force that they can make the few movies that do focus on them successes -- see "The Devil Wears Prada," or "Sex and the City" and "Sex and the City 2." (Actually, don't see "Sex and the City 2," but consider what its high grosses say about exactly how desperate women are to find themselves reflected on the screen in anything other than supporting, carelessly sketched nubile girlfriend roles.)

Enter "Bridesmaids," a movie chock full of female talent, based on a script solicited from Wiig after she impressed bro-mantic comedy king Judd Apatow in her supporting role in "Knocked Up." If this movie can win the box office (or, frankly, even get close) on its all-important opening weekend, the thinking goes, studio executives will have an economic incentive to make more female-friendly films like it.

The movie is being sold in the vein of Apatow's boyish burp-fests: Trailers focus on a food poisoning scene that involves women in bridal gowns excreting from both ends. But the plot line -- which centers on Wiig's 30-something character, down on her luck professionally and personally, being put through the modern maid-of-honor mill by her best friend -- offers the promise of something really good: an exploration of female social relationships, all the more complicated in an age when we do not all marry by 22 but create our adult lives alongside our girlfriends.

From the trailers, I have come to hope that "Bridesmaids" might in fact be a broader and more commercial take on the kind of relationship Nicole Holofcener painfully and hilariously picked apart in 1996's "Walking and Talking," one of the best movies about women ever made. (Holofcener has consistently made funny, stirring flicks about chicks, but they are by no stretch of the imagination blockbusters, or even major releases. It is a testament to their rarity that after her 2006 movie "Friends With Money" concluded, one of the two girlfriends I'd gone to see it with remained in her seat, staring at the screen. When I nudged her to move, she looked at me balefully and said, "I didn't want it to end. I want it to keep going.")

I have not seen "Bridesmaids," though I know many people who have said good things about it, including Salon's Mary Elizabeth Williams. And Tuesday night, before receiving the email from Bracken forwarded by Smith, I was moved to post on Facebook Melissa Silverstein's explanation from "Women and Hollywood" of "Why Bridesmaids Matters," after seeing a link to Silverstein's post on the Facebook page of movie producer ("Sleepless in Seattle," "How to Lose a Guy in Ten Days") Lynda Obst. Obst had written, "Seriously, we have to see this movie this weekend. If you are a woman, like women, or simply don't hate them ... if we don't go, they won't build them anymore."

Just a few minutes later, Farrin Jacobs, an editorial director at HarperCollins Children's books, commented on the link that though she had already seen the film, she had made a date to see it again this weekend with girlfriends, "because I want funny lady movies to keep existing." Jacobs later told me that her determination was born of that New Yorker piece, and how sad she'd become thinking that men just won't watch female characters. She'd been in Los Angeles and scored tickets to the "Bridesmaids" premiere, and she claims that at one point, the movie made her laugh so hard that she cried. "Seeing the movie and thinking about the Anna Faris article, and knowing that if this movie didn't do well, that would be it for at least the next couple of years for the life of female comedies, I'm trying to get everybody I know to see it," said Jacobs. "Also, it's funny."

So here is this movie. This movie that may be silly, may be gross, may be great, may be terrible, may have hidden under its flatulent exterior a nuanced and too rarely spied depiction of female connection. It seems that it really matters -- to Hollywood and its press and its executives and its female moviemakers and storytellers and performers -- how it does. As Obst, who has no professional involvement in "Bridesmaids," told me when I contacted her about this story, "We are all watching it like we made it." The film's director, Paul Feig, who perhaps has copped an overly chivalrous tone recently, told the Onion's AV club, "It's not often that a studio will allow a movie that's all driven by women to be made, so I felt the pressure of, 'If I screw this up, it's going to fuck things up for women.'"

I just keep thinking about Wiig, the driving creative force behind the existence of the film, having been thrust, apparently unwillingly, into the role of feminist figurehead. I imagine her holed up in a hotel room, Hillary Clinton style, waiting for the polls to close and the weekend box office numbers to be finalized.

Me, I've been wondering how I'm going to get out of the house to the movie theater. I am home on a maternity leave, a 6-week-old beside me, just beginning to figure out baby sitting. Perhaps I will try to take my daughter to the earliest neighborhood matinee, provided she's not fussing. She's in the only stage of a woman's life in which she's actively encouraged to do what the ladies in this movie apparently are doing: belching, farting, barfing. More than that, maybe it will be an investment in her moviegoing future, an effort to ensure that she will have years ahead of her in which she has a chance to see herself, her friendships, her relationships, her work and her life reflected back at her in a way that makes her laugh till she cries.