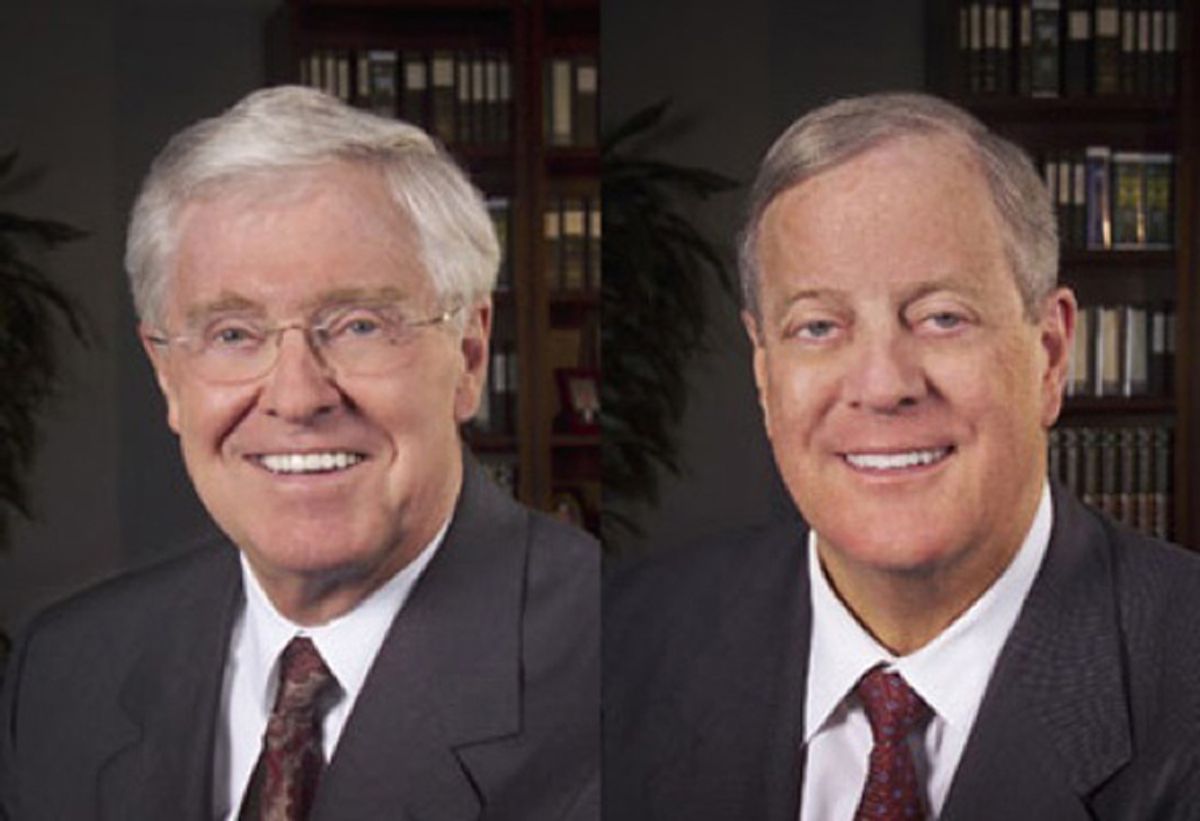 In the marketplace of ideas, all that matters is the strength of your argument, and whether or not you are a billionaire. That is the wonderful ideal America is striving for: the unregulated free exchange of paid-for speech representing the interests of an incredibly elite few. And to that end, Charles Koch, of the Koch brothers (official "bad guys" of liberalism in 2011), is purchasing the economics department of Florida State University.

David W. Rasmussen, dean of the College of Social Sciences, defended the deal, initiated by an FSU graduate working for Koch. During the first round of hiring in 2009, Koch rejected nearly 60 percent of the faculty's suggestions but ultimately agreed on two candidates. Although the deal was signed in 2008 with little public controversy, the issue revived last week when two FSU professors — one retired, one active — criticized the contract in the Tallahassee Democrat as an affront to academic freedom.

If you're going to spend a lot of money endowing a professorship, it's only rational to ensure that the professor whose salary you're paying advances your interests, right? After all, when the Kochs invested millions in George Mason University, they got the incredibly influential anti-environmental regulation nonprofit Mercatus Center out of the deal. The least FSU can do for its cash is teach "Atlas Shrugged" in a business ethics class. (Which is something that Randian-run bank BB&T has made happen, also at Florida State University.) (Yes, BB&T received billions of dollars of TARP money.)

Today's rich libertarian knows the real ticket to winning the future is filling schools with people who agree with you. (This hasn't worked for the left, but that may be because they spent all their time in control of academia rigorously critiquing texts instead of just inventing pseudo-scientific justifications for gutting the welfare state and eliminating the tax burden of very rich people.)

But is buying an academic a good investment? Sure! Just ask the DeVos family, who -- when they're not pushing "education reform" -- are keeping Austrian economics afloat at their weird fake Michigan university. As Andrew Leonard reported yesterday, DeVos-funded ideas have made it all the way to the chairman of the House Ways and Means Committee!

Left-wing ideas -- not just Krugman-liberal ideas but proper left-wing ideas -- tend to be a bit less popular among the ruling classes, and so left-wingers are generally less successful in getting their fringe academics quoted by legislators, or starting up influential, well-funded think tanks whose policy papers end up as major legislation. This is proof, according to economics, that libertarian ideas are superior: Majorities of citizens may disagree with them, but a plurality of the money has spoken!

(Though, to be fair, libertarian ideas that don't benefit people like Koch don't get a fair hearing in this system, either. Because cutting back on military spending and ending the drug war are not exactly "moneymakers.")

Right-wingers often express contempt bordering on seething hatred for silly liberal things that wouldn't exist without government subsidies, like "Mime troops" and "accordion festivals" and "public libraries." If the nation's finest mime troupe can't survive on ticket sales alone, who needs it! But relying on the kindness (and tax-deductible charitable donations) of the super-wealthy, on the other hand, is just how things are done, and always have been done, in much of political media and conservative academia. (The National Review, for example, cannot survive on advertising dollars or subscription fees alone, which is why each year it begs people to send checks, like common hobos.) Those of you who don't want to flatter self-regarding billionaires for a living are advised to reconsider, because that's the only job that will always be hiring in Tea Party America.