Critics say they're obsolete, but New York's main branch is a reminder of what the Internet can never do 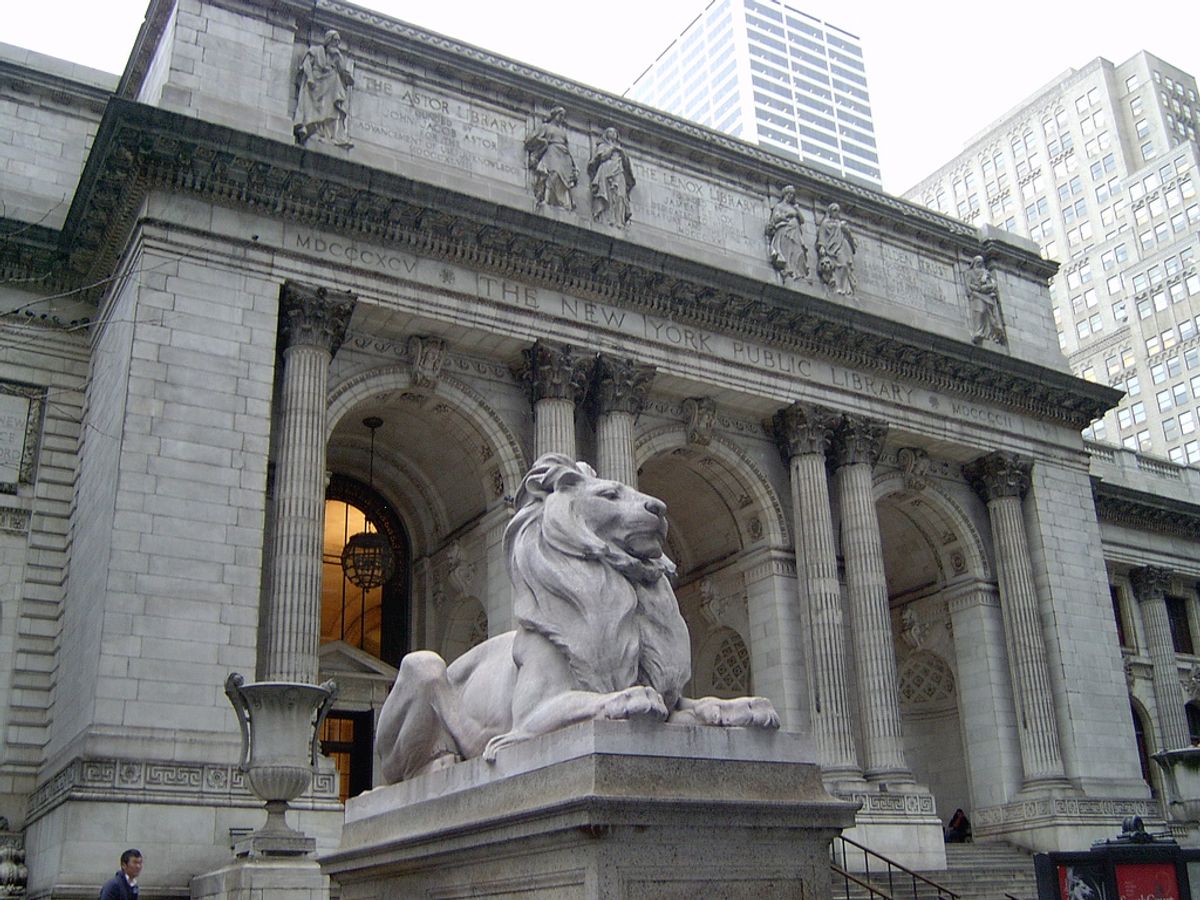 The main branch of the New York Public Library
--

There are bigger and busier libraries in America, but none more iconic than the main branch of the New York Public Library on Fifth Avenue, that stately, marble Beaux-Arts temple of knowledge whose entrance is flanked by two enormous stone lions. May 23 is the 100th anniversary of the edifice (which was renamed the Stephen A. Schwarzman Building in 2008, after the financier donated $100 million toward a major renovation).

Some would also say that it's a superfluous part. Public libraries across the nation and the globe now face drastic funding cuts from politicians and administrators who often claim that they're obsolete. For months, Britain has been rumbling with protests against plans to close as many as 400 local branches. Earlier this year, Gov. Jerry Brown announced that he was cutting all state funding to California's libraries, leaving cities to pick up the slack. Defenders of such cutbacks typically ask why, in the age of Google and e-reader devices, anybody needs libraries.

Let's set aside the obvious rejoinder that many citizens can't afford e-readers and, furthermore, can only access Google via a library computer. The anniversary of the NYPL's main building is an occasion to talk about why the library needs to be a place as well as an ethereal mass of data residing somewhere in "the cloud." Not everything we need or want to know about the world can be transmitted via a screen, and not every experience can be digitized.

Also, not everything a library collects is a scannable book or document. The NYPL's anniversary exhibit includes such treasures of print culture as a Gutenberg Bible, a copy of the Declaration of Independence written in Thomas Jefferson's hand, and a first quarto edition of "King Lear." It also features the personal effects of writers, such as Jack Kerouac's rolling papers, harmonica and Valium box (with notes scribbled on it): Charles Dickens' letter opener (with the paw of his beloved cat Bob preserved as the handle): There's even a lock of Mary Shelley's hair: I've always found the material presence of such objects quietly thrilling. They remind me that literary figures, who sometimes seem so Olympian, also muddle through an ordinary human existence like all the rest of us. Other gems in the NYPL exhibit simply don't translate well to the screen. You really have to see the enormous pages of an actual edition of James Audubon's "Birds of America" in person to fully grasp its magnificence. The same goes for the library's illustrated scroll of Lady Murasaki's "The Tale of Genji," sometimes described as the first novel, but certainly the single most beautiful "book" I have ever laid eyes on.

Those items are priceless, but what about a small folding pamphlet titled "What to Do If You're Arrested," distributed in the bad old days of the 1960s by the gay-rights organization the Mattachine Society and just the size to fit discreetly into a back pocket? Or the underground anti-Nazi propaganda tracts from 1939, complete with the tomato seed and tea packets they were originally concealed inside? The exhibit includes copies of anti-Semitic German children's books published around the same time and a collection of lapel buttons from the civil rights era.

Unlike the Dickens and Brontë memorabilia, which could just as easily be enshrined elsewhere, these are once-mundane objects you'd never find in a museum, but they're an important part of our written culture and well worth saving. The library collects millions of such items -- things, and to store and properly display things, you need a place in the world (preferably climate controlled), not just bytes in the cloud. Every human community creates such materials, and they all need libraries to preserve them.

In a smaller side room, there's also an exhibit of books researched and written in the main branch itself -- one of the most famous is Betty Friedan's "The Feminine Mystique." The NYPL runs several programs providing research assistance, grants and work space for qualifying writers, but as any bookish New Yorker (and many visitors) can testify, the Adam R. Rose Main Reading Room makes itself available to everyone. There's something about that vast, serene, light-filled space, with its monumental oak tables and brass lamps, that steadies and focuses the most jittery mind. When I'm finding it hard to work anywhere, I can always work there.

Today, those oak tables have power outlets and more than half the patrons are tapping on laptops. Yes, they have laptops and yet they've come to the library. Librarians (who are of course the most invaluable feature of any library) tend to bristle at the stereotype of their profession as a glorified shush patrol, and typically respond by pointing out the many, many community services libraries provide, from storytelling for children to multimedia resource centers for job seekers to gathering places for seniors. But let's not totally discount the shushing, because a good library can also give its patrons something that's getting harder and harder to find: quiet.

The Rose Reading Room is an exceptional place, but even the humblest branch library can provide the same precious resource to its patrons. There's nothing "elite" about needing some tranquility, either: If anything, the poorer and younger you are, the harder it is to find a quiet spot to read, write and think, where family isn't crowding around and countless electronic devices aren't blaring at you from every corner. Access to a little peace and quiet is as essential to a humane society as access to parks and art. That's not something the Internet is ever going to be able to give us. It can only be found in a real, not a virtual, place, which is what libraries have always been and what we all still need them to be.

Web site for the centennial celebration of the Stephen A. Schwarzman Building