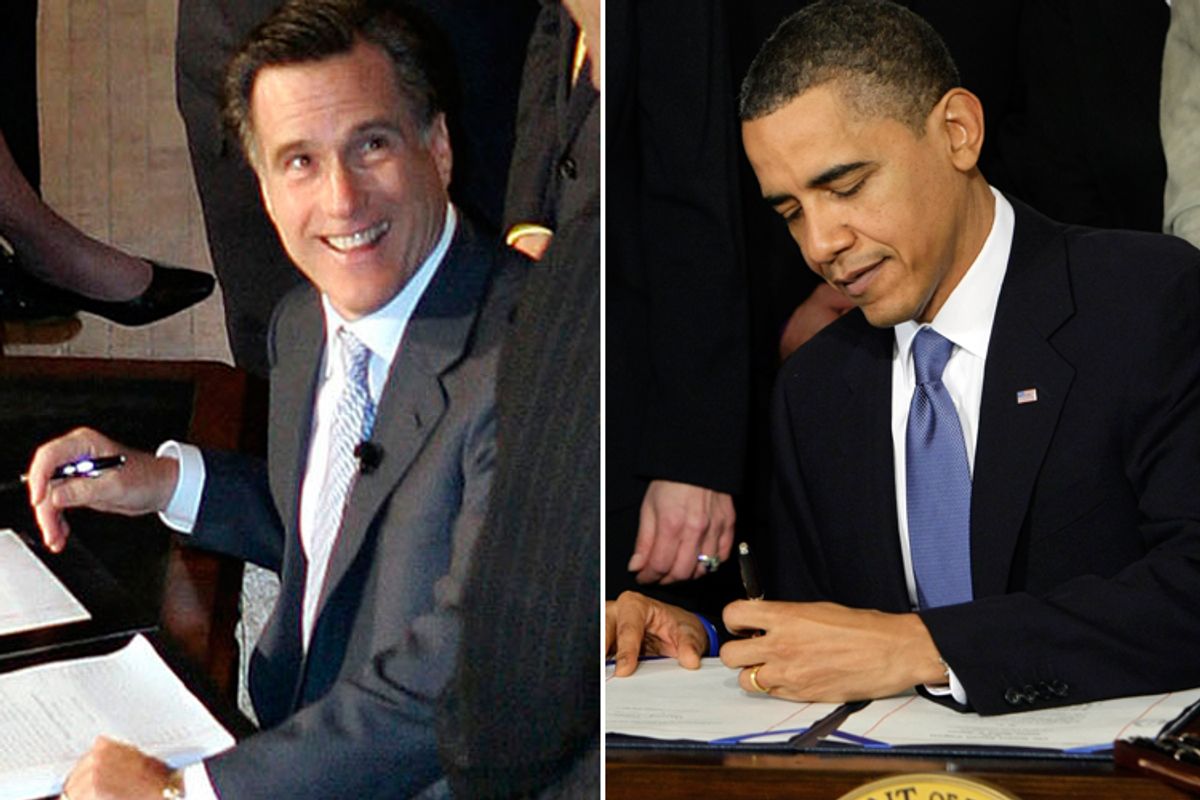 Mitt Romney is giving what's billed as a major healthcare speech in Michigan Thursday, attempting to quiet criticism of the groundbreaking healthcare law he signed in Massachusetts in 2006 that is strikingly similar to the hated "ObamaCare."

For a take on Romney's new plan, and to get a sense of his shift in thinking on healthcare, I spoke to MIT economist Jonathan Gruber, who was both one of the key architects of the Massachusetts health law and a paid consultant to the Obama administration during the development of the national healthcare law.

"I find it incredibly disappointing," Gruber says of Romney's new plan, outlined in a USA Today Op-Ed Tuesday. "It's sort of stunning to see the turnaround. "

Both RomneyCare and ObamaCare include a so-called mandate requiring individuals to purchase insurance. On the right, the mandate is easily the most hated part of Obama's healthcare law, which is why the issue is so damaging for Romney. His USA Today Op-Ed is silent on the mandate question, but Romney says he would "empower the states to determine their own health care futures," push for medical malpractice reform, and offer tax breaks for people buying insurance.

That's a marked shift from the man Gruber remembers working with as a technical consultant to the Romney administration. Recalling a planning meeting he attended with Romney in 2005, Gruber says the then-governor was fully behind the individual mandate.

"It was clear to me in that meeting. He argued strongly for it and was very excited about it," Gruber says. "His role was essential. It was ultimately his call about whether to include the mandate."

Gruber adds: "I was the outside numbers guy and explained to him that the mandate made it all work. Without it you covered one-third of the people but spent two-thirds as much money because all the sick people signed up."

Gruber said the entire idea of the Massachusetts law -- which became the basis for ObamaCare -- was what he calls a "three-legged stool": requiring insurers to cover everyone, regardless of preexisting conditions; a mandate to require everyone, including the healthy, to buy insurance; and subsidies to allow those who can't afford insurance to buy it.

"He seemed to understand that," Gruber says of Romney. Gruber was later appointed by Romney as a founding board member of the independent authority created under the healthcare law.

Recently, Romney has conceded the Massachusetts law "wasn't perfect," but stopped short of renouncing it. That's a shift from 2010, when Romney argued the Massachusetts plan worked well as "a state solution" but criticized Obama for a "one size fits all" imposition on the states. And back in 2007, Romney even said on "Meet the Press" that it would be a "terrific idea" for other states to adopt the individual mandate. Expect the video of that interview to be played  again and again as the GOP primary gets underway.