In his big healthcare speech, he refuses to walk away from the law he signed in Massachusetts 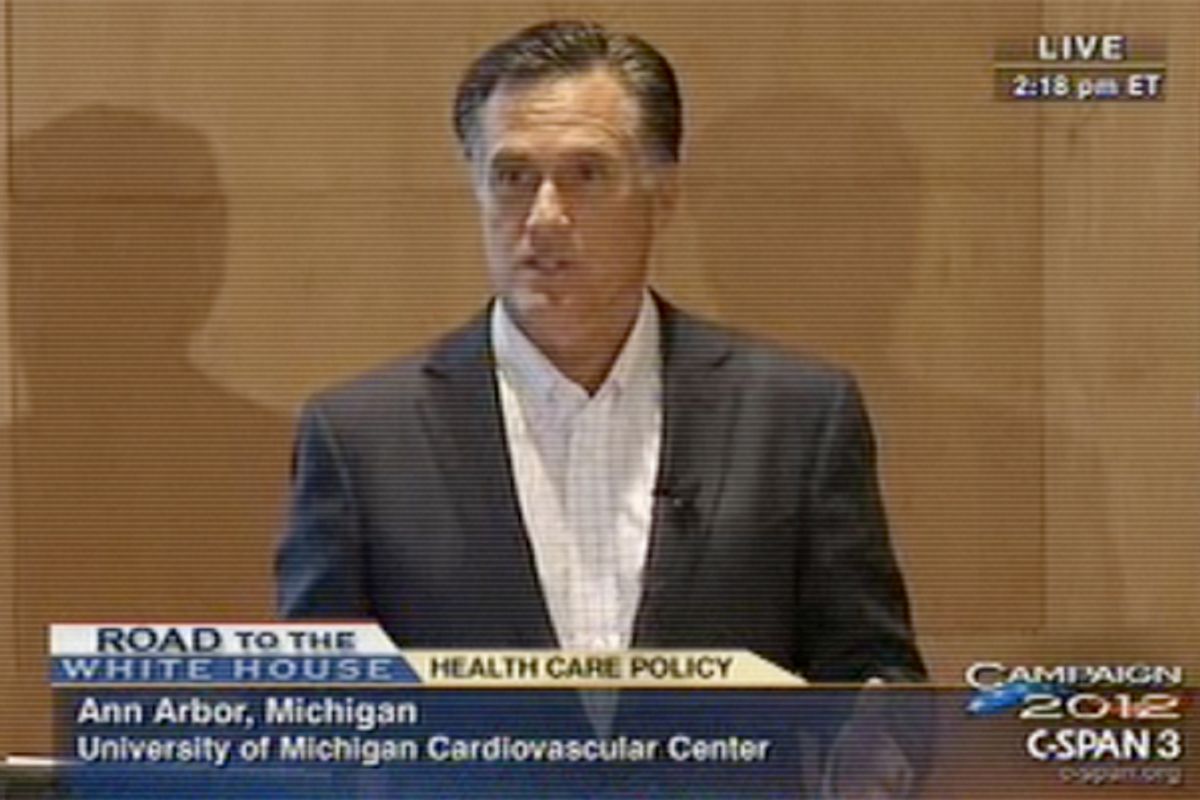 During his big healthcare speech this afternoon, Mitt Romney acknowledged that many observers believe he can't win the Republican presidential nomination without repudiating and apologizing for the universal plan (and individual insurance mandate) he imposed on Massachusetts five years ago.

"And I presume that a lot of folks would conclude that -- if I did that -- it would be good for me politically," Romney said. "But there's only one problem with that. It wouldn’t be honest."

If it sounds a little jarring to hear Romney standing firm even as the political winds shift, it's for good reason: He never does. His 18-year political career has been marked by one abrupt shift after another on one major issue after another -- every time to bring himself into alignment with whatever constituency he happens to be pursuing. (This is why, for instance, he staked out four different positions on abortion in 11 years.)

And the closer you examine his presentation today, the more it becomes clear: This speech was actually quite consistent with that history of pandering.

The problem for Romney is that, in shedding his Massachusetts moderation and reinventing himself as a born-again Reaganite in advance of his last presidential run, he took an enormous amount of grief for his apparent lack of core convictions. But in that same campaign, he bragged about his own Massachusetts healthcare law, even though some (but not many) conservatives expressed displeasure at its reliance on an individual mandate. It made sense that Romney would do this: It allowed him to tell Republicans that he'd used conservative, free-market principles (personal responsibility, no government-run healthcare programs, strong private insurance companies) to deliver a big achievement in a policy area where Democrats had long enjoyed the public's confidence.

So for Romney, repudiating his own law would be no ordinary flip-flop. This was his signature accomplishment in Massachusetts. Turning back on it would make his reputation as a spineless opportunist far, far worse. In other words, it's just not an option. So instead, Romney has opted to stand by it -- sort of -- and to hope that doing so will help him score points for standing on principle and to undo some of the damage from his previous flip-flopping.

Thus, Romney this afternoon issued a fairly coherent defense of his Massachusetts law, noting that it had radically expanded coverage without costing the state nearly as much as critics -- most of them Republicans -- have suggested. "As a result of the plan we put in place," Romney said, "about 400,000 (residents) are now insured. And I'm pleased with the fact that we were able to accomplish that."

But then, after he finished defending his own law, he shifted gears and attacked the national healthcare law signed by President Obama -- a law that was modeled on Romney's, right down to the mandate -- as "an economic nightmare" that "raises taxes, diverts Medicare funds -- and it kills jobs!"

What Romney is hoping is that Republican activists and opinion-shapers will accept that his position on "ObamaCare" itself is no different from theirs and from every other Republican running for president (that it's a disaster that must be repealed immediately, and that the idea of a mandate at the federal level is wrong) and that they'll decide that what he did in Massachusetts is, therefore, irrelevant, since he won't be doing it at the national level. It may be true that Romney imposed a mandate on Massachusetts, he wants the average Republican to say, but when it comes to getting rid of "ObamaCare" President Romney will be no different than President Bachmann.

This isn't exactly an easy sell. As I noted this morning, what Romney really has to hope for is that GOP elites will eventually -- probably months from now -- decide that he's their best general election option, and that they'll work backward from there, inventing a precise rationale that they can then sell to the base for giving him a pass on healthcare. His speech today won't take care of his healthcare problem; but it may contain the basis for a rationalization that elites can eventually latch on to.