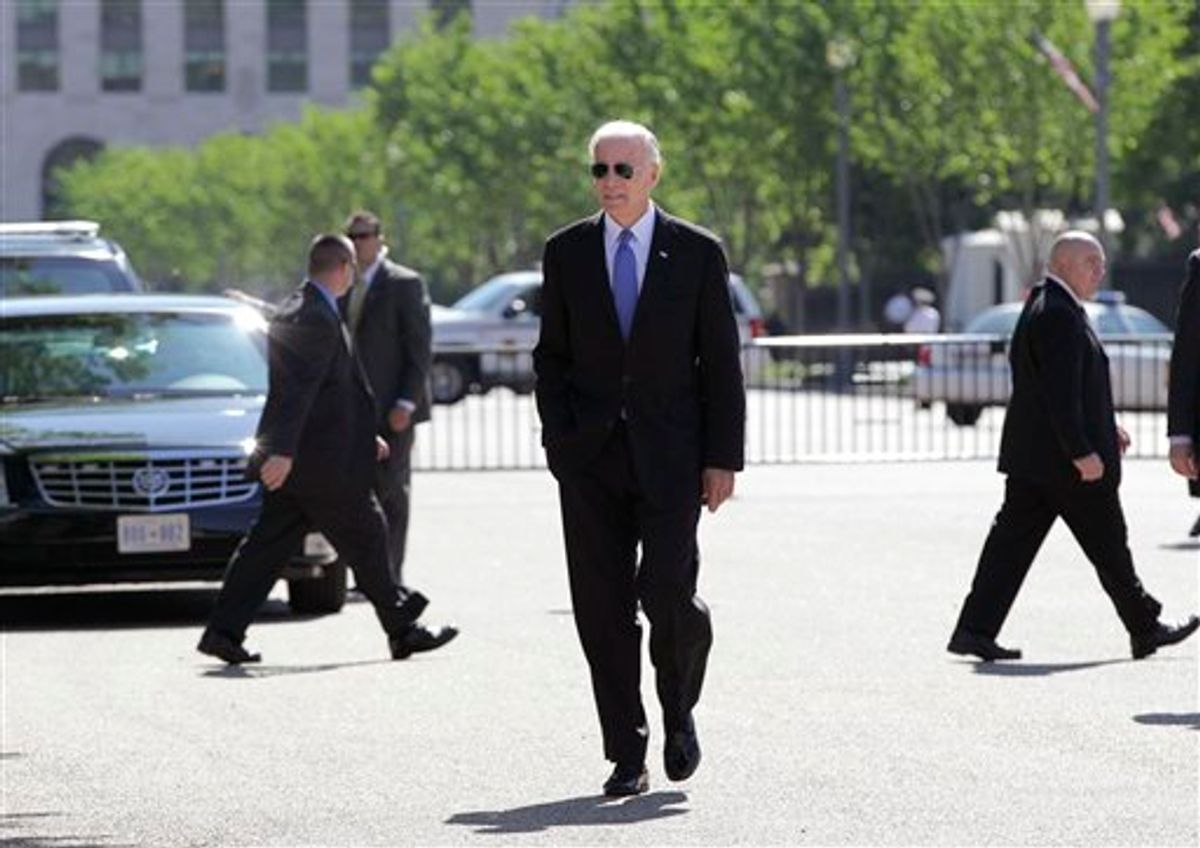 Vice President Joe Biden walks from the White House to the Blair House in Washington, Thursday, May 5, 2011, for a meeting with congressional Republicans and Democrats in hopes of striking a deal on deficit reduction. (AP Photo/J. Scott Applewhite) (AP)
--

On a list of high-ranking American targets assembled by Osama bin Laden while he was in hiding, Vice President Joe Biden did not figure very high. In fact, he didn't figure at all; apparently, the al-Qaida leader considered Biden insufficiently powerful to be worthy of assassination.

Bin Laden "talks about targeting priorities," the counterterror official said. "He says the president is of course the top target if you could get a shot at him. Also the military chiefs like the chairman of the Joint Chiefs of Staff, the defense secretary, top military people. There is a note indicating that the vice president is not an important target because that position has less weight."

The ongoing analysis of bin Laden's notes and other belongings is providing a steady stream of news about al-Qaida's attack plans and priorities -- like this Biden tidbit -- but it's also offering us a personal image of bin Laden that gets more anecdotal by the day. First we learned that he enjoyed watching himself on television. Subsequently it was revealed that he dyed his beard to stave off the effects of age. Then we discovered his "natural viagra." (What could be next? A secret pornography trove?)

Today, based on his writings, U.S. counterterror officials announced that he was also "a micro-manager." ProPublica reports:

Bin Laden ... criticized an online propaganda magazine edited by a young American in Yemen, saying the bloodthirsty tone of an article could harm al-Qaida's image among Muslims, according to the U.S. counterterror official.

The magazine, called Inspire, "apparently discussed using a tractor or farm vehicle in an attack outfitted with blades or swords as a fearsome killing machine," the official said. "Bin Laden said this is something he did not endorse. He seems taken aback. He complains that this tactical proposal promotes indiscriminate slaughter. He says he rejects this and it is not something that reflects what al-Qaida does."

Indiscriminate slaughter not something that reflects what al-Qaida does? Sounds like bin Laden was also a bit of a hypocrite.