Newt's daughter: He didn't dump my mom in the hospital

But that's not the way Gingrich's ex-wife tells the story 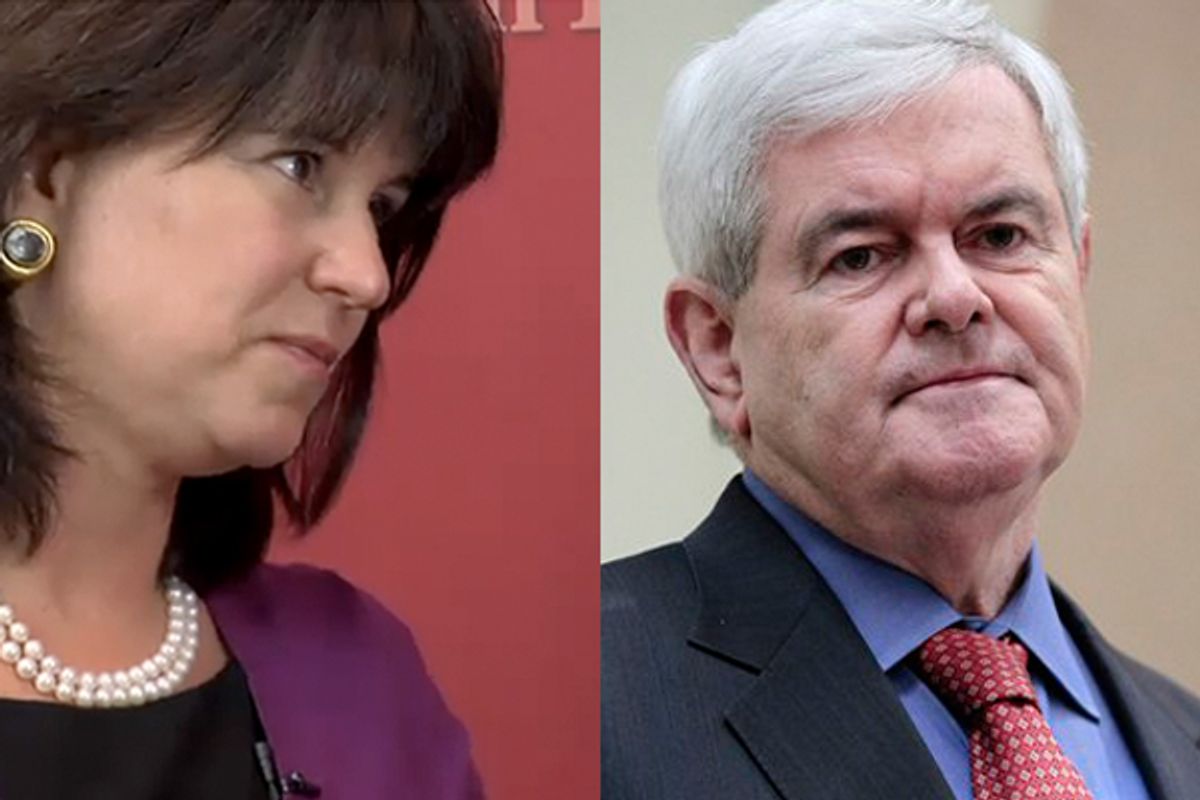 Jackie Gingrich Cushman has decided to resurface the most damaging anecdote of her father's political career: that Newt Gingrich demanded his first wife hash over details of their divorce while she was stricken with cancer in a hospital bed. Cushman suggests in a new column that the story is false.

But Cushman's column, titled "Setting the Record Straight," is directly at odds with the testimony of her mother from just a few years after the 1980 incident.

Regular readers will remember a few months ago I researched the story of Newt and his cancer-stricken first wife, also named Jackie. The anecdote has dogged Newt ever since Mother Jones first reported it -- and extensive evidence of his philandering -- in 1984. Cushman's column is likely part of a conscious inoculation effort. Cushman writes a syndicated conservative political column and recently co-authored a book with her father.

Cushman doesn't offer much in the way of details, besides saying that she was present during that 1980 hospital visit and that the media has repeated unspecified "untruths":

It is this visit that has turned into the infamous hospital visit about which many untruths have been told. I won't repeat them. You can look them up online if you are interested in untruths. But here's what happened:

My mother and father were already in the process of getting a divorce, which she requested.

Dad took my sister and me to the hospital to see our mother.

She had undergone surgery the day before to remove a tumor.

The tumor was benign.

As with many divorces, it was hard and painful for all involved, but life continued.

That's all she offers. Now, here is what Newt's wife Jackie told the Washington Post in a Jan. 3, 1985, profile:

He walked out in the spring of 1980 and I returned to Georgia. By September, I went into the hospital for my third surgery. The two girls came to see me, and said Daddy is downstairs and could he come up? When he got there, he wanted to discuss the terms of the divorce while I was recovering from the surgery ... To say I gave up a lot for the marriage is the understatement of the year."

Indeed, the author of the Mother Jones profile that first reported this anecdote told me he, too, heard the hospital visit tale from Jackie (though the MoJo story sourced it to a former Gingrich aide). Now, the story has often been rendered as Newt "serving divorce papers" on his wife in the hospital. That's an exaggeration of Jackie's version. But her account is hardly flattering to Newt.

Newt Gingrich's spokesman, by the way, told me in March that Newt denies the "terms of the divorce" part of the story but acknowledges there was "an argument."

The question becomes: Should we believe Gingrich's wife from  five years after the incident, or what his daughter claims 30 years later when Newt is gearing up for a presidential run?