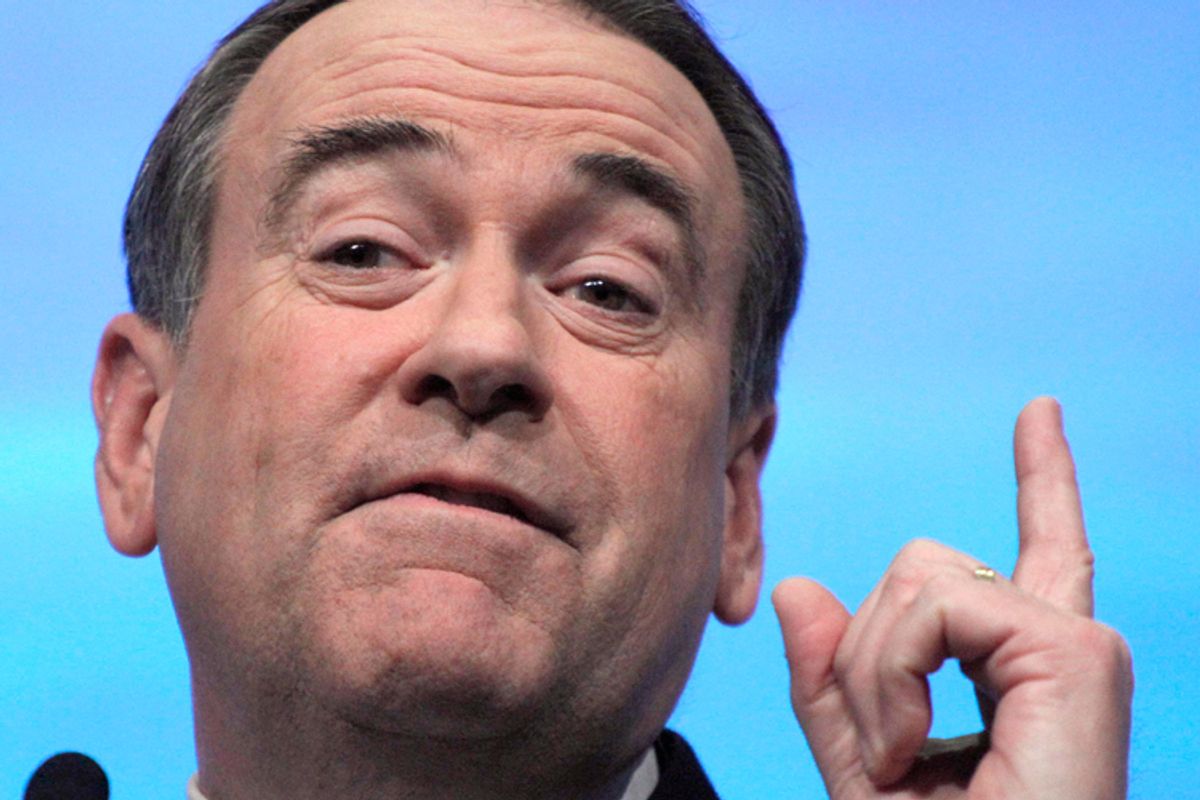 Mike Huckabee is promising to make "a very special announcement" on his weekly Fox News show Saturday night about his 2012 intentions.

"Governor Huckabee will announce tomorrow night on his program whether or not he intends to explore a presidential bid," Woody Fraser, the show's executive producer, said. "He has not told anyone at Fox News Channel his decision."

The key word in that statement may be "explore." As Taegan Goddard pointed out earlier, it would be legally problematic if Huckabee were to use his Fox News platform to formally declare a presidential candidacy. But he could probably get away with saying that he's decided to leave the show and that he'll be looking into the possibility of maybe eventually launching a 2012 campaign.

It may be that his hand is being forced. Huckabee has tried to remain above the GOP fray, refusing to participate in candidate cattle calls and to accept debate invitations, but a report earlier this month suggested that Fox executives -- who previously suspended likely White House candidates Newt Gingrich and Rick Santorum from their roles as paid commentators -- had given him until the end of May to declare whether he was running. (Huckabee's camp has disputed this, contending that the former Arkansas governor won't make any decision until sometime this summer.)

It's also possible, of course, that he'll use the occasion to put the White House chatter to rest, declaring that he has no intention of even exploring a presidential run next year and reaffirming his commitment to his television show.

But it's hard to ignore his producer's use of the word "explore." There would be no need to be so precise if Huckabee were simply planning to say he doesn't want to run for president. It may be a head fake, but it sure seems like he's ready to take a serious step toward running.

If he does enter the race, Huckabee would be formidable. Not only does he consistently run at or near the top of the GOP pack in polls, but he also consistently ranks (among Republicans) as one of the most broadly popular national figures -- with positive ratings much higher than any of the other likely '12 candidates. Huckabee's 2008 campaign was cursed by its image as an amateur operation, and by his inability to draw significant support from non-Christian conservatives. Polls suggest he's broadened his appeal since then, although the scrutiny of a presidential campaign could undo the progress he's made and force him back into the role of a niche candidate.

At the very least, Huckabee -- who won the 2008 Iowa caucuses by 9 points -- would enter the race as the prohibitive favorite in the lead-off caucus state. Much like Bob Dole in the run-up the 1996 campaign, he would run with the title "President of Iowa" -- meaning that the pressure to post another convincing victory there would be high.