The real reason the GOP refuses to raise taxes

Everyone knows increasing revenues has to be part of a budget deal. But if Republicans give in, Obama wins big 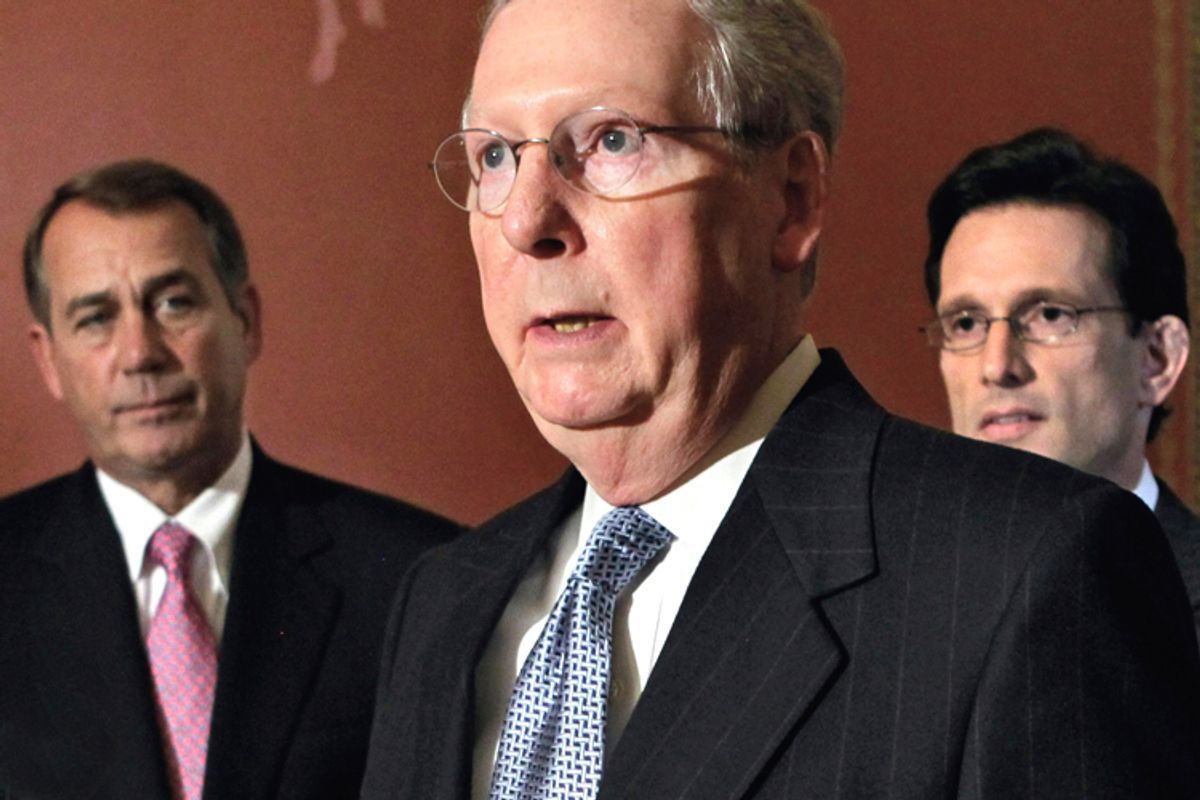 Bloomberg reports that "global investors" are convinced the U.S. will have to raise taxes as part of a deal to address the long-term budget deficit.

Assessments of the U.S. budget impasse show no such regional variation, with majorities of investors in the U.S., Europe and Asia concluding a tax increase is a necessary part of a deficit-reduction deal. Asked if it is possible to reduce "substantially" the deficit without raising taxes, 64 percent of respondents say no, while 33 percent say it's possible.

The view on taxes is significant because of the political outlook of the global respondents: Those describing themselves as "right-of-center" outnumber "left-of-center" investors by more than 3-to-1; 37 percent say they are "centrists."

But why should we limit ourselves to just the investor class? Americans in general, as Bruce Bartlett exhaustively documents, support raising taxes as part of a deficit deal.

Whether grudgingly or not, most people who are not Republicans elected to Congress agree that higher taxes must be a part of the solution to out-of-whack government finances. This is not merely a question of bringing revenue and spending levels in line with each other -- this is a question that determines what kind of country we are. Paul Krugman makes this explicitly clear in an absolutely essential column today. We must raise taxes in order to take care of our aging population. It's really as simple as that.

Given the realities of the federal budget, a party insisting that tax increases of any kind are off the table -- as John Boehner, the speaker of the House, says they are -- is, necessarily, a party demanding savage cuts in programs that serve older Americans.

Americans are getting older, and healthcare costs are rising. To balance the budget while ruling out any revenue increases is to guarantee that seniors get worse care.

In a rational world, it would seem that a political party that had chosen to stake its future on degrading the quality of life of a huge demographic slice of the voting population would be guaranteeing its own demise. And you would think that the leaders of the other political party would be in a very strong position in any budget negotiations. Perhaps the most bizarre aspect of the current state of politics in Washington is the fact that the party that is bucking the will of the people (and the conclusions of the investor class) is the one that the conventional wisdom regards as setting the terms of debate.

Bartlett believes the GOP orthodoxy is beginning to crumble. But I'm not so sure. Because even if the obviously right thing to do for both the long-term fiscal security of the United States and the wellbeing of older Americans is to craft a grand bargain that includes budget cuts and revenue increases, the brutal political truth, for Republicans, is that if Obama negotiates such a deal, he'll be untouchable in 2012 and greatly strengthened as a leader. For the current congressional GOP leadership, that prospect is apparently far more horrible than a severely degraded standard of living for senior Americans.