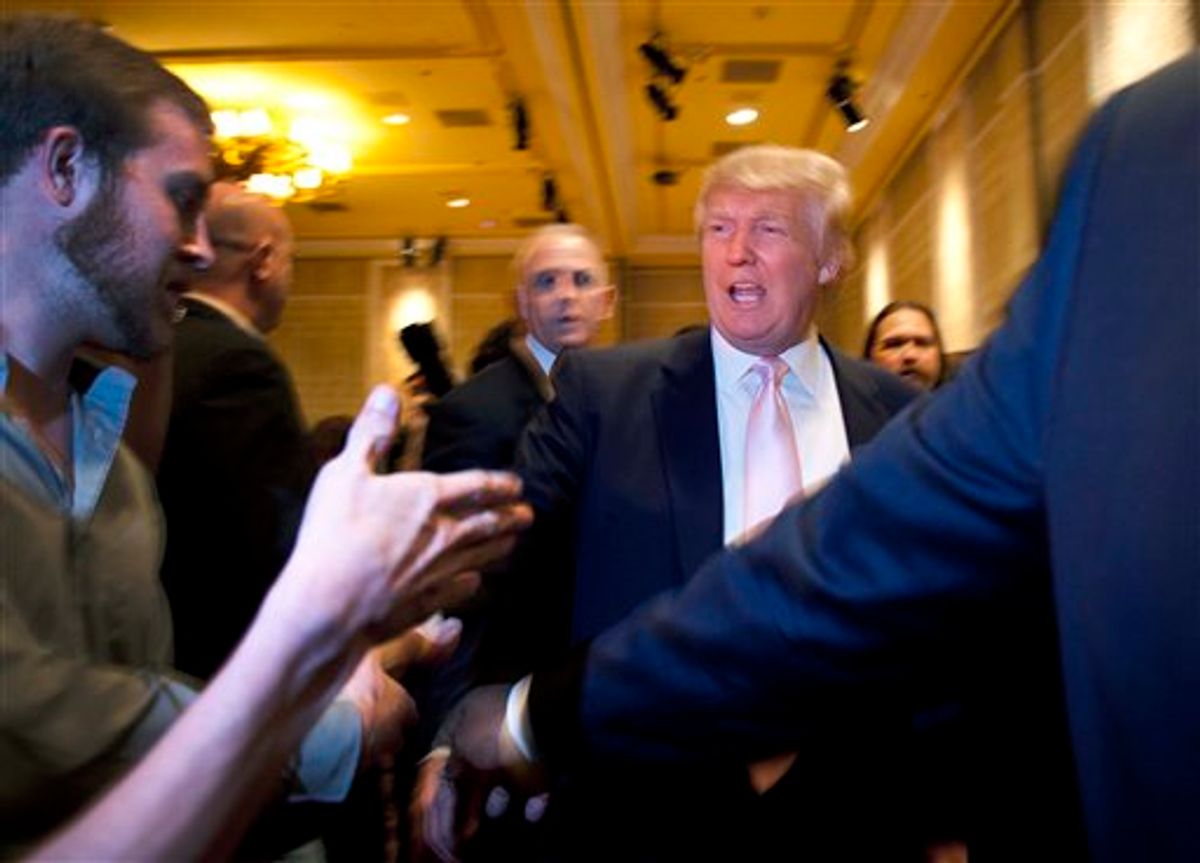 Donald Trump greets supporters before speaking to a crowd of 600 people during a gathering of Republican women's groups, Thursday, April 28, 2011, in Las Vegas. Trump's flirtation with a White House bid continued Thursday night with a lavish reception at the Treasure Island casino in Las Vegas.(AP Photo/Julie Jacobson) (AP)
--

"[R]egardless of whether [Donald] Trump ultimately seeks the presidency, his attempt to promote himself as a savvy financial manager who can lead America out of its economic rut is bringing new scrutiny to his own business practices," writes Michael Barbaro in today's New York Times.

And in Trump's case, it appears a little scrutiny goes a long way. Barbaro describes hundreds of frustrated homebuyers who are bringing lawsuits against Trump or his affiliates because of their alleged role in tying the "Trump" brand to housing complexes that Trump himself had no hand in developing.

Barbaro details Trump's efforts to "cash in on his name" by licensing it to other developers:

Over the last few years, according to interviews and hundreds of pages of court documents, the real estate mogul has aggressively marketed several luxury high-rises as “Trump properties” or “signature Trump” buildings, with names like Trump Tower and Trump International -- even making appearances at the properties to woo buyers. The strong indication of his involvement as a developer generated waves of media attention and commanded premium prices.

But when three of the planned buildings encountered financial trouble, it became clear that Mr. Trump had essentially rented his name to the developments and had no responsibility for their outcomes, according to buyers. In each case, he yanked his name off the projects, which were never completed. The buyers lost millions of dollars in deposits even as Mr. Trump pocketed hefty license fees.

Indeed, an agreement between Trump and the developers of Trump Tower Tampa confirms that Trump lent his name to the project, and agreed to spend up to 12 hours meeting buyers, in exchange for over $4 million -- but had "no liability" if problems arose.

According to the Times, Trump is unsympathetic to those who have lost hundreds of thousands of dollars in deposits -- and feel "betrayed" -- as a result of the failed developments that once bore his name:

What has most galled people ... who sank much of their life savings into their dream homes, was Mr. Trump’s suggestion that the collapse of the project was a blessing -- because it had allowed buyers to avoid the housing crash and the resulting plunge in home values.

“They were better off losing their deposit,” Mr. Trump said.