"I think I may have been naive," Louisiana student tells Salon after event causes a Fox-fueled furor 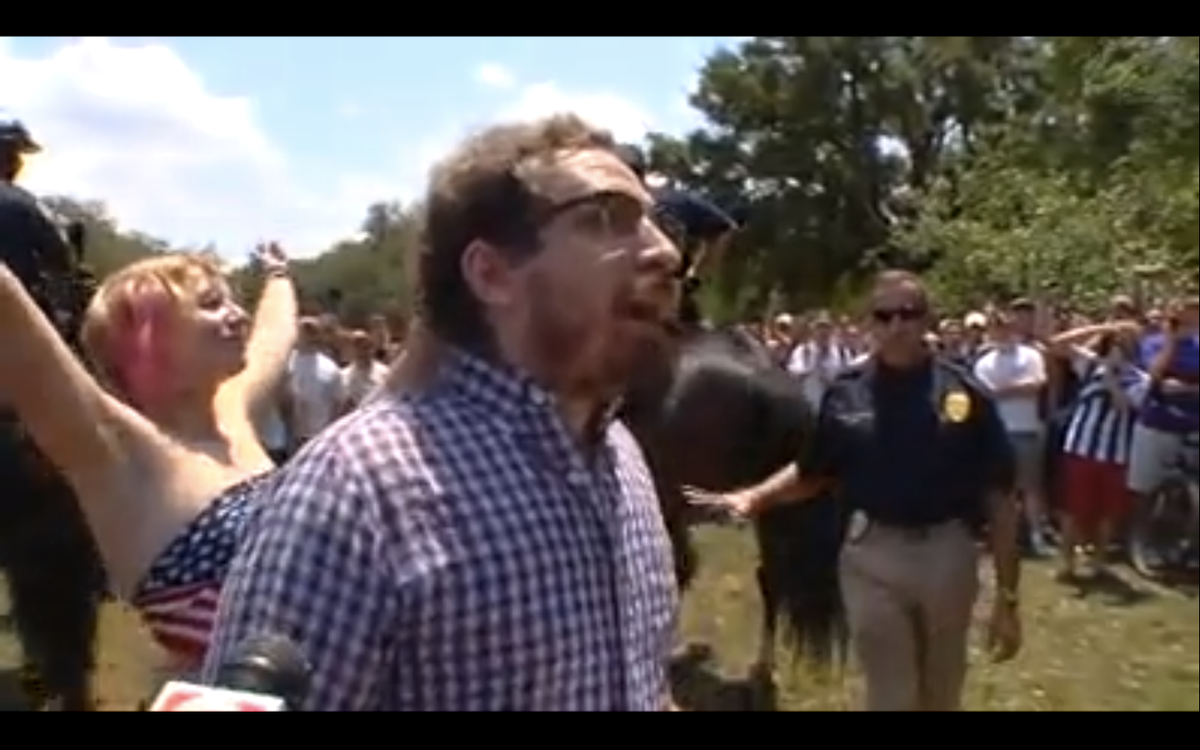 On Wednesday, a crowd of over 1,000 people gathered on the campus of Louisiana State University to protest graduate student Benjamin Haas's planned flag-burning (you can see footage of the incident at the bottom of this post) in an event that enraged fellow students and fueled a Fox-led furor.

Haas organized the event to protest the treatment of Isaac Eslava, an LSU student who was charged with felony criminal damage and arson after he stole and burned the LSU War Memorial's American flag on May 1, shortly after President Obama had announced the death of Osama bin Laden. But Haas now says that by Wednesday morning, the negative reaction had caused him to abandon the idea of burning a flag, and he planned merely to make a speech. Sustained physical and verbal taunting prevented him from doing even that; before he could speak more than a few words, policemen led the student away, as obscenities (and water balloons) continued to fall. (Flag-burning may be legal, but Haas lacked a burn permit, so would technically have been breaking the law had he followed through with his original plan.)

Haas's colleague and friend Joe Rhodes told us how surprised he was to see a crowd of this size assemble in such a short time. "The real story here is the power of social media and the speed and emotionality that comes with using it," he said. "In less than 24 hours, Facebook was used to get over 1,000 people to the LSU parade grounds."

We asked Haas by email about the event, if he had any regrets, and whether he understood why  others might have found his original plan offensive.  (When we asked whether he would support similarly controversial protests, such as the burning of a Koran, he had no comment.) His answers are below.

What did you originally hope to accomplish with the flag-burning?

Burning the flag in protest was not meant to condemn the United States, the government, or the military. It was to demonstrate that burning a symbol is speech act protected by our Constitution, pure and simple, and should not be considered as a factor in the prosecution in the destruction of property. These are separate issues. In the case of Issac Eslava, I saw what I deemed to be an unjust level of prosecution for a crime simply because the object burned was a flag. The police had every right to prosecute him for desecrating the war memorial. That was an act of violence I do not condone. However, when they prosecuted him for a felony, rather than giving him a fine, I concluded that it could only have been the symbolic value of the property which accounted for the increased charges. Moreover, as a teaching institution, I believe the university should possess an ethical conscience. It was this responsibility and code of ethics to which I was appealing, to use in this instance as a teaching opportunity rather than a means of excessive punishment.

Thus my action was intentionally designed to reassert our freedom of expression, and to show how symbolic performances are a vital part of democratic life, no matter how offensive. Additionally, because democratic ideals service varying attitudes and opinions, one symbol can convey vastly different interpretations, as the flag does, and all should be protected. It is part of our birthright as Americans.

Do you feel you proved your point?

My initial purpose to perform flag-burning as an element of free speech has largely been lost. At this point, I think I may have been naïve entering into this situation. The changing point was when I started receiving the threats on my life prior to the day of the event. My protest became about free speech more generally; it became about what our rights and responsibilities actually entail and how much power is invested in symbolic performance acts. Those early actions in response to even the mentioning of a flag-burning demonstrated the need to change the focus of the protest. I chose not to burn the flag even before I was notified about the need for a permit at 8:45 a.m. on Wednesday, largely because of the potential violence that was made apparent to me via emails, message boards, and phone calls. However, I also knew that I wanted to walk out on that field, not because of bravery or courage, but because I refused to be intimidated by a mob, which is what those 1,500 people became the moment they saw me standing alone in the parade grounds.

Did you expect the kind of reaction you got (on both the local and the national level)?

No. The whole event was sublime. The level of violence and hatred was completely unexpected. I thought I might attract a total of a hundred people, some in favor of me and some against. The reaction was obviously far more intense than anything I have ever experienced in my life.

Can you see why people (on the left and the right) might have found your actions needlessly provocative?

Hindsight brings clarity. I know and respect that many people love this country and its flag. And I knew my protest would be misunderstood as an attack on the country instead of a form of expressing dissent, and would associate my cause with Isaac’s rather than seeing my reaction in terms of freedom of speech. I was not trying to be provocative for its own sake, although such an interpretation is inevitable. I simply wished to highlight where free speech acts and property crimes are differentiated.

Were you scared at any point in the course of the protest?

Fear is not the right word. I was terrified. I knew that there were immediate and pressing threats around me; several of the protestors made that perfectly clear to me. I knew before walking out there that some people in that crowd wanted to do me bodily harm. When I was surrounded as I was trying to speak, and as police escorted me across the parade grounds while the crowd spit on me and threw debris, I knew little could be done if I somehow got caught up into the energy of the mob. I am grateful to the LSUPD and East Baton Rouge Parish Police officers for doing an excellent job at keeping me safe and helping me out of a tense and potentially dangerous situation. Without them, things might have turned out differently.