My life as a man in a skirt 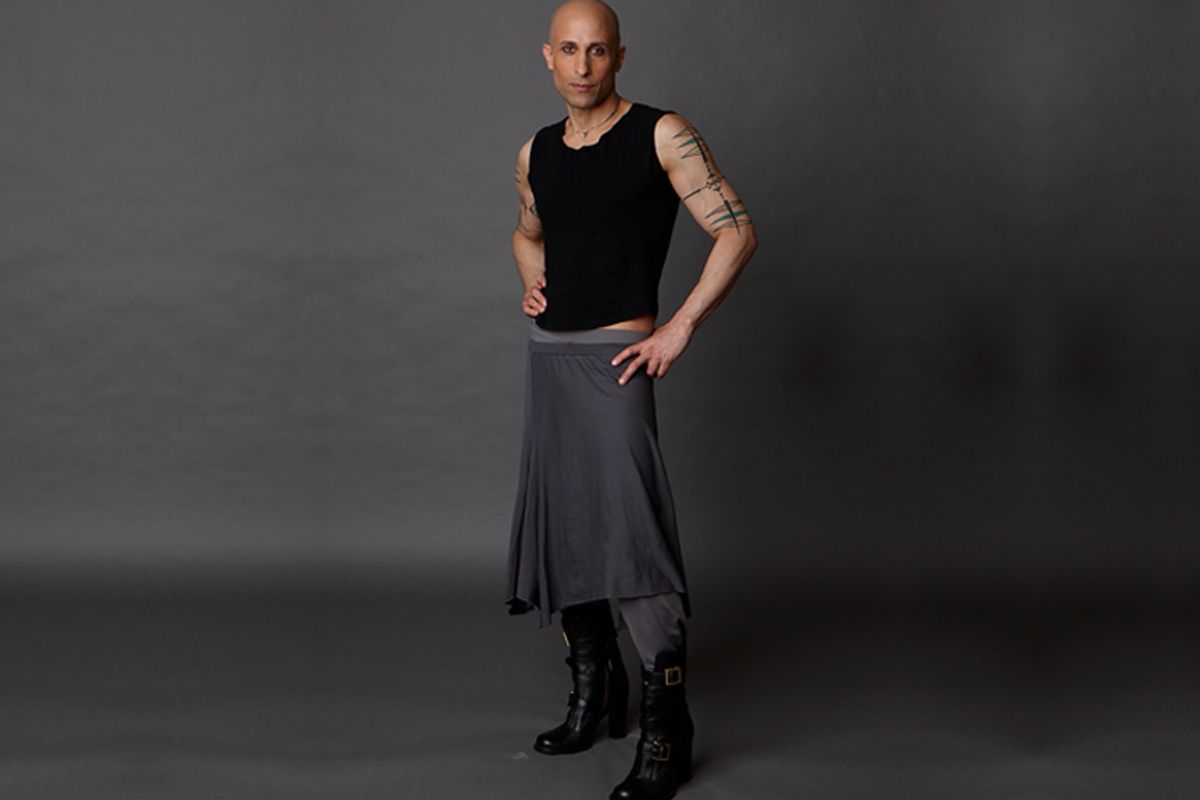 For the great bulk of my adult life, beginning roughly when I was sixteen, and continuing, off and on, until now, at the age of forty, I have fallen short, sometimes dangerously short, of the conventional ideal of masculinity. From my taste in clothing (skirts and high heels and women's underwear), to my taste in cosmetics (pink lip gloss and eyeliner), to my taste in sex (I can't get aroused unless I'm submissive, and it helps if the woman looks like a boy), to my distaste for body fat and body hair and competition of any kind, to the two hours it still takes me to get ready to go out at night, I have behaved, in many respects -- and I have gotten no end of shit for it -- like a vain, prissy, neurotic, body-obsessed "woman." Or, in the words of a powerful Italian mobster named Jackie the Toad, with whom I worked very closely for a year after college, I have behaved, revoltingly, like "half-a-fag."

By "half-a-fag," Jackie the Toad was not suggesting that I occasionally sleep with men. Of my heterosexuality he was fairly well convinced, since he believed, erroneously as it happens, that I was sleeping wholeheartedly with a "plump and yummy" Italian hairdresser we knew in common. (And as it happens, I do not sleep with men. On the few occasions in my adult life when I have been in the near company of another man's erect penis, my impulse was to flee.) What Jackie meant by "half-a-fag" was that, though I seemed to be attracted to women, and ostensibly occasionally slept with them, the way I held myself -- the way I walked, the way I ate, the way I dressed, the way I obsessively studied my reflection in the mirror, the way I gabbed away "like a little girl" on the phone with my friends, the way I did not salivate at the sight of every woman's bouncing tits -- was not in keeping with what one expects of a real man.

Jackie was not alone, among the important men in my early life, in thinking that my masculinity left something to be desired. My maternal grandfather, a rather prominent political philosopher named Sidney Hook, who wrote, in book after book and for every serious journal imaginable, on subjects ranging from Marxism to existentialism, and from psychoanalysis to euthanasia, and who spent most of his life, in the face of Communist aggression around the world, fighting, with his voice and his pen but never his fists, for the causes of freedom and democracy -- a man, therefore, who could not have been further removed, both culturally and intellectually, from Jackie the Toad -- also, in so many words, called me "half-a-fag."

The word he used was faygeleh, a mild Yiddish pejorative for homosexual. Queer and fairy are close approximations. When he used the word, in a conversation with my grandmother over breakfast at their summerhouse in Vermont, with me, visiting for a week during college, sitting daintily between them, he assumed I didn't know what it meant, forgetting that Leo Rosten's "The Joys of Yiddish," which I had thumbed through many times, was sitting in a bookcase just ten feet away. I ended up cutting my visit short. The straw that broke the faygeleh's back was my grandfather's more direct confrontation, a few days later, of the issue of my sexual orientation, in which he minced no words, in either Yiddish or English, in expressing his disgust for my appearance. My grandfather later apologized to me for his meanness and intolerance during this visit, his letter including the following -- "I hope you will one day forgive your Grandpa. It's not your fault, it's mine. I'm an antediluvian fuddy-duddy, an old stick-in-the-mud, and it's not always easy for me to keep up with the behavior of young people."

And then there was my dad. The poor man, to his hurt and disappointment, has never known quite what to make of me. And who can blame him? I've never looked like the children of his friends, or even like the children of strangers, and I certainly haven’t looked like the two children (my two older brothers) who preceded me. Nor have I acted like any of them. My behavior, in his eyes -- the eyes of a hematologist and biochemist for whom there is always either a rational or irrational course of action -- has been consistently irrational and bizarre. And I don't know of a single father who would disagree with him. Consider: I rarely have a job, generally living hand to mouth on mung beans and millet and canned herring; I've lived most of my life in a succession of cramped, skimpily furnished rooms on other people's terms, including a five-year stretch in a curtained-off portion of a woman's living-room; I don't own a suit or tie or even a single pair of respectable trousers; the heels of my shoes, bordering on stilts, run from four to seven inches; I own very few shirts that fall below my belly button; my tattoos, like that terrible ivy growing up the side of our house that my father was always hacking away at with a shears when I was a child, seem to climb another foot every time he turns his back, and now, at the base of my neck, are encroaching on my face; I move from coast to coast seemingly at whim, doing the same "nothing" in Los Angeles that I was doing just as easily in New York; my love life is baffling, my romantic entanglements lasting, on average, about forty-five minutes; I sometimes go for weeks, even months, not speaking to anyone, in a state of willful solitary confinement, and, far from unsettling me, this seems to bring me nothing but peace and fulfillment; despite having a law degree, and having clerked for a federal judge, which should have earned me a salary by now of at least $250,000 a year, my most recent bout of employment, for $12 an hour, was babysitting a seven-year-old girl named Ruth; I own nothing, and save nothing, and accomplish nothing tangible, and have no permanent hold on life whatsoever. If an alien spacecraft, mistaking me for a representative human being, zoomed down from the heavens and grabbed me for the zoo back home, my absence would be noticed by about ten people, and missed, at most, by five. Ruth would be one of them.

And, yes, I dress like a girl. How many dads out there do we know of who could put up with that? About my shiftlessness, my lack of drive, my father has continually expressed frustration, but about my androgyny, to his great credit, he's only directly pressed me once, when I was eighteen, about to head off to Columbia College (his alma mater), my androgyny having just come into full bloom. I was in the kitchen at the time, making a quesadilla with fat-free mozzarella. He snuck up behind me, taking me by surprise just as I was about to open the toaster oven:

"Jonathan? Can you please explain something to me? What is this ensemble all about? The sarong, the earrings, the lipstick, your mother's perfume. My curiosity has finally gotten the better of me, and I can’t help but try to satisfy it."

There's an especially obnoxious drawl that every Southern California teenager, when under attack, can adopt in half a second if he wants to tell his parents to "fuck off and leave me alone," and I put on that drawl and said: "I don't know, man. I wear what I wear."

He did have a right to know. He was not asking too much. His curiosity had a right to be satisfied. I will give him all of that. Unfortunately, I wasn't in a position to enlighten him, because I didn't know myself. I was just doing what came naturally to me. Being called to account for it, as I have been again and again throughout my life, was like being called to account for one's need to breathe.

It was not until the writing of my memoir, "The Man in the Gray Flannel Skirt," a deep and painful stab at self-analysis (the only kind of analysis I can afford), that I was able to come up with a plausible answer to my father’s question. It is an answer, I hope, that will satisfy him, his curiosity if nothing else, and will explain to him why his youngest son, despite having been clearly shown the way to success and happiness, veered so drastically off the path.

Not long ago, my five-year-old nephew, Ariel, when he heard the title of my book, called me up and said, with a note of intense worry in his voice: "Uncle Jon-Jon, can I ask you a question?"

"Do you, um, wear bras?" The poor kid was terrified. He lives in North Carolina. The craziest thing he’s ever seen is a guy with a long goatee, and tattoos, who works at the Whole Foods in Raleigh. Ethan heard the words Uncle Jon-Jon and man in skirt, and his wheels started spinning. He had visions of an angry mob outside his bedroom window, carrying pitchforks and torches, screaming for the head of the nephew of the man in New York City who wears bras.

No, Ariel. I don't wear bras. Unlike cross-dressers, those deviants, I have a sense of proportion. Five-inch wedges from Steve Madden -- I own ten pairs -- are respectable. My Tommy Girl tank top, falling just below my hairless nipples, is respectable. My gray flannel skirt, with a rhinestone belt buckle saying "Jon-Jon" attached to it, is respectable. Stockings, wigs, Pancake makeup, and whatever else cross-dressers do that I don't do -- keep it away from me.

Ariel's confusion was understandable. He was hardly alone -- anyone who has ever set eyes on me also comes to mind -- in wondering what goes on behind the scenes. One thing I've learned over the course of twenty-four years of behaving and dressing androgynously is that people hate to be confronted with indeterminacy. The uncategorizable is unsettling. If I were a man in drag, people would know exactly what I am, or at least they would believe they know exactly what I am, and have fewer problems with me: "Oh, yes yes yes, that man is definitely gay, and he has a very strong identification with women, he probably thinks he is a woman, and that's why he dresses like one, and a sex change is probably in the offing, in fact it wouldn't surprise me if his own special vagina is being made to order as we speak."

But that's not what I was, that's not what I am. I have a penis, and I am attached to it. My androgyny was, and is, more subtle and confusing, less womanly, say, than boyishly girly, or perhaps girlishly boyish better captures it, or perhaps epicene is the word we're looking for here, but epicene's not very helpful because what the hell does epicene really mean? And this difficulty in summing me up drives people crazy. They won't have it. Whether I like it or not, they'll find just the right label for me -- homosexual, bisexual, transsexual, polysexual, metrosexual, metasexual; autosexual, cryptosexual, crypticsexual, protosexual, extraterrasexual, gender-bender, glam-boy, player, poseur, flaneur, slut, aesthete, dandy, lebenskunstler; lotus-eater; bohemian nymph; bourgeois nymph; bourgeois nymph masquerading as a bohemian nymph! -- and, whether they like it or not, they’re determined to make it stick.

Jon-Jon Goulian grew up in La Jolla, Calif., where he wore a skirt to his high school prom. A grandson of political philosopher Sidney Hook, he attended Columbia College and NYU Law School. "The Man in the Gray Flannel Skirt" is his first book.