The end of the world is here ... again

Doomsday prophets are nothing new in America, and their predictions have always been wrong -- so far 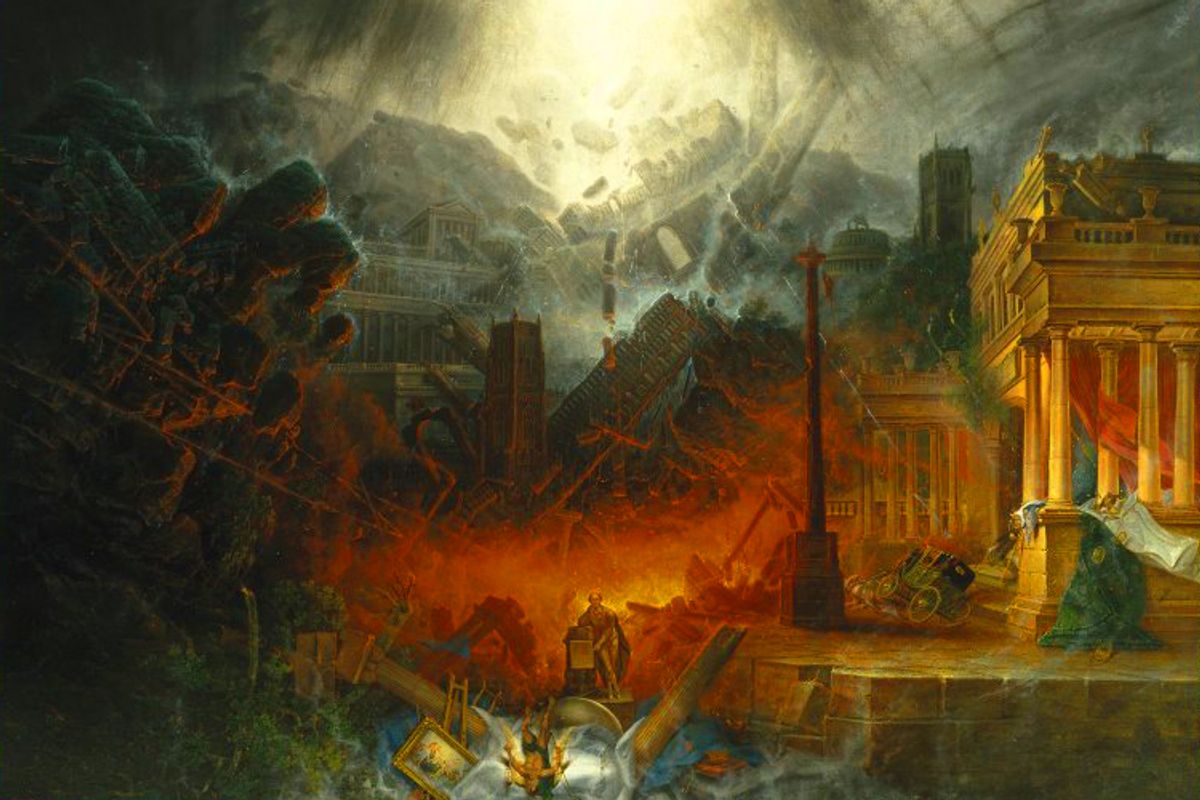 "The Edge of Doom" by Samuel Colman
--

If you’re too busy to think about Armageddon, as prophesied in the Bible, think again. It’s next Saturday.

At least that’s what followers of the California-based Family Radio ministry are saying. Since last October, Family Radio believers have fanned across the county in buses announcing that a tremendous earthquake will shatter the world on May 21. On that day, Jesus will reappear and take to heaven around 3 percent of humankind -- true Christians chosen long ago by God. Other humans will endure 153 days of death and horror until they are annihilated on Oct. 21, the end of the world.

Harold Camping, the 89-year-old leader of the Family Radio group, bases his apocalyptic prediction on numbers in the Bible, which he sees as absolutely trustworthy. According Camping’s Bible-based math, Noah received God’s message in 4990 B.C. (7,000 years ago) that the destruction of the world would come in 7 days -- or 7,000 years, per the statement in Peter 3:8 that one Bible day equals a thousand years. Another part of the equation is April 1, A.D. 33, the supposed date of the crucifixion of Christ. Camping uses a multiplication formula of 5 x 10 x 17 x 5 x 10 x 17, with each number having divine significance, that produces 722,500, the number of days between the crucifixion and the day of the divine Rapture.

Camping’s followers are so convinced of the accuracy of these predictions that they have given up their jobs, families and possessions to join the nationwide tour, known as the caravan ministry. Their buses, placards and clothing brandish the "Awesome News.” One 75-year-old Utah man left his wife of 53 years and his 10 children and their families to spread the message.

But is the math right? History says no. The end of the world has been predicted many times before. Nearly two decades ago, Camping himself warned that the world would end on Sept. 6, 1994. When that didn’t happen, he said he had misread the figures -- and now, with his revised calculations, his flock is in a frenzy of anticipation.

America has seen many such prophecies of imminent divine judgment. Traditionally, Christianity has been divided between so-called postmillennialists, who believe that Christ will return again after an earthly golden age, and premillennialists, who say that the world would end when Jesus returned and separated the saints from the sinners. Camping’s sect is rooted in a strong premillennial current that reaches back to the 1840s, when tens of thousands of American were whipped to a furious excitement by the prophecies of the Vermont Baptist minister William Miller (1782-1849).

Miller initiated the Adventist craze by doing Bible math to identify a date for Christ’s second coming. The Book of Daniel says, "Unto two thousand three hundred days; then shall the sanctuary be cleansed.” Using an alternative Christian principle by which a biblical day equals one year, Miller used a fourth-century B.C. Persian king’s warning about the end of the world in 2,300 years to predict that Christ would return sometime between March 1, 1843, and March 1, 1844. Miller crisscrossed the Northeast, announcing the news.

Soon ministers of all denominations jumped aboard the Adventist juggernaut, preaching about the forthcoming Day of Judgment at huge camp meetings. By the end of 1843, some 50,000 Americans firmly believed that the end was near, and perhaps as many as a million others were expectant, if dubious.

March 1, 1844, came and went. Miller recalculated the numbers and arrived at Oct. 22, 1844, as the new Judgment Day. Anticipation mounted. Believers got rid of property they considered unnecessary. One Philadelphia tailor hung a sign: "THIS SHOP IS CLOSED IN HONOR OF THE KING OF KINGS, WHO WILL APPEAR ABOUT THE 23RD OF OCTOBER. GET READY, FRIENDS, TO CROWN HIM LORD OF ALL.”

Oct. 22 arrived and brought … the Great Disappointment. That’s what many Millerites called the day. Some of the devout fell into mourning and depression. William Miller came up with a new biblical equation and reassigned the millennium to spring 1845. Once again, the end did not come. Still, many people kept alive the hope of the Second Coming. One of Miller’s followers, Ellen G. White, founded the Seventh-day Adventist Church, now one of the world’s largest religious bodies. Other forms of Adventism included Jehovah’s Witnesses and Advent Christians. Over the years, Adventists have arrived at different dates for the Judgment Day: 1847, 1850, 1852, 1854, 1855, 1863, 1867, 1877 and many more since.

The Adventists were hardly alone in their prediction of world destruction. The year 1881 was a special focus of anticipation because of a prophecy by the 16th-century British psychic Mother Shipton (née Ursula Sontheil), who had written a poem that included the lines, "The world to an end shall come/ In eighteen hundred and eighty one." A number of unusual natural phenomena in 1881 -- a meteorite, violent windstorms and large earthquakes -- convinced Mother Shipton’s followers that the end indeed had arrived. More recently, a cult has arisen around a prophecy made in the 1550s by the French seer Nostradamus that the world will be destroyed around 2012 -- an idea associated by some with a 5,126-year era established in an ancient Mayan calendar that ends on Dec. 21, 2012. The Mayan prediction has been popularized in disaster movies like Mel Gibson’s "Apocalypto" and Roland Emmerich’s "2012" as well as in books like journalist Lawrence E. Joseph’s "Apocalypse 2012: A Scientific Investigation into Civilization’s End," healer Andrew Smith’s three-volume "The Revolution of 2012" and the bestselling "2012: The Return of the Quetzalcoatl" by New Age writer Daniel Pinchbeck. There are websites about 2012 that offer survival supplies such as a year’s worth of freeze-dried food, a solar-powered oven, nuclear anti-radiation pills, a crank radio and guides like "The Urban Survival Handbook" and "Emergency Food Storage."

What will the Nostradamus and Mayan Calendar people say if the apocalypse doesn’t come in 2012? And how about the Family Radio believers and other Christian Adventists, with their appointed dates for Armageddon?

Well, the current predictions may prove false, but the doomsayers need not worry. The numbers can always be crunched again -- and again and again.

David S. Reynolds is Distinguished Professor of English & American Studies at the CUNY Graduate Center. His new book, "Mightier than the Sword: Uncle Tom’s Cabin and the Battle for America," will be published in June.