A performance review for Timothy Geithner

The Treasury secretary (and a TARP architect) has made for a comically easy target. Is he getting a bum rap? 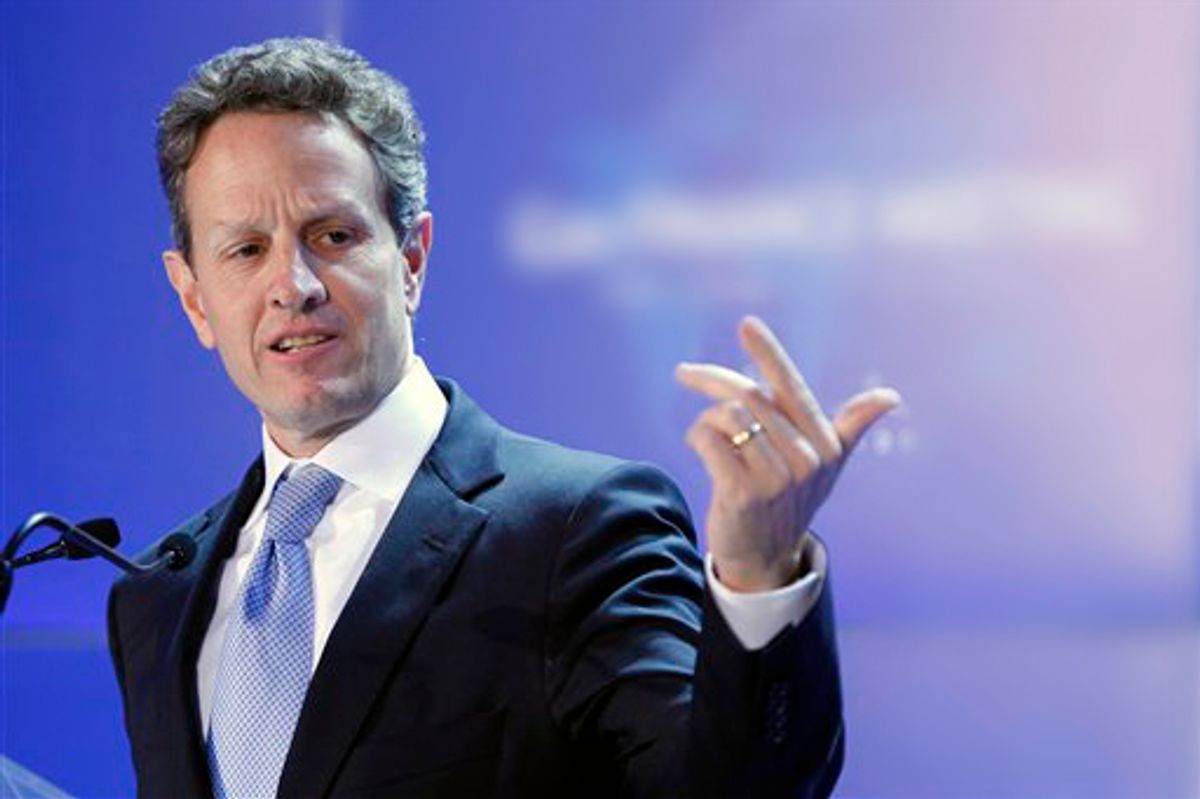 FILE - In this Feb. 19, 2011, file photo U.S. Treasury Secretary Timothy Geithner answers questions at the closing press conference of the G20 Finance summit in Paris. Five years and one financial crisis since the United States and China commenced regular high-level economic talks, fast-growing Beijing might have the upper hand Monday, May 9, 2011, in the latest round of discussions between the world's two biggest economies. While analysts don't foresee major breakthroughs at the talks Monday and Tuesday, China's expanding economic might will give it greater leverage now. (AP Photo/Francois Mori, File) (Francois Mori)
--

It's no secret that Treasury Secretary Timothy Geithner has an image problem, although part of it may just be a visceral response to his appearance or demeanor. Virtually every published image of the man has him looking up at some congressional panel, where he sits coiled up tight like a snake defending its turf. Of course, there was also his work as the president of the Federal Reserve Bank of New York during the 2008 market collapse, when he was integral in shaping the Troubled Asset Relief Program (TARP).

Geithner conducts himself in front of the camera as if it's the numbers, not his image, that are his primary concern -- a trait that was on full display this past week, when he was in the spotlight on two pivotal issues. With the U.S. set to exceed its $14.29 trillion debt ceiling, Geithner detailed the measures his department will implement to buy Congress a few more weeks to reach a compromise. On this he was clear: Should Congress fail to raise the debt ceiling, then bottled water, canned beans and shotgun shells will replace U.S. Treasuries as the world's safest investment.

He also took part in a forum with officials from China, whose devalued currency has emerged as a major sticking point between the two countries. For Geithner's tenure to be viewed as a success, he will need to effectively manage the trade dispute with China over the country's artificially undervalued currency.

With Geithner's body of work crystallizing, we thought it would be a good time for a proper performance review. So Salon spoke with Gus Faucher, Moody's director of macroeconomics and a former Treasury Department economist, about the looming debt battle, negotiations with the Chinese, and Geithner's public relations issues.

Why do you think Geithner is such a political lightning rod?

His role at the New York Fed made him controversial because he was heavily involved with everything going on in 2008 with Lehman Brothers and Bear Stearns. He helped with the TARP legislation, and then he got off to a rocky start as Treasury secretary as well.

You mean because of his tax issues?

Yeah, I don't think there was anything substantive there, but that was a public relations problem, certainly.

Couldn't you say his overall problem is with public relations? Whether it's his demeanor or the way he's perceived, he just doesn't seem too concerned about his own headlines.

I wouldn't put it that way ... I just think he's low-key and perfectly content to be in the background. That's good in some respects and bad in others, because when things go wrong he doesn't necessarily have this reservoir of good will to draw on.

But going back to his rocky start: The administration presented a financial rescue proposal and at the time it just didn't seem too well thought out. That's really what got him in some trouble. The administration built up what they said were Timothy Geithner's plans to rescue the financial system, but then he got up there and it seemed like it was a lot less than what the markets were expecting. I think that hurt his credibility out of the gate.

But since then he's done a good job in implementing administration policy and working to repair the financial system. The truth is that TARP has worked out, with the exception of the Fannie-Freddie piece, which is admittedly a big part of it. But the government is going to make money off what it gave to the banks and auto companies, and the financial system didn't collapse, which is what we were really concerned about two and a half years ago. So he definitely looks better now than he did in early 2009.

He was in the news a couple of times this week. The first was in regard to the debt ceiling negotiation, and some of the measures the Treasury is taking to buy Congress time to negotiate. Is this an accomplishment or more of an operational duty?

It's not really an accomplishment. The Treasury Department has a playbook and ways to maneuver around for something like this. I don't view that as a success for Timothy Geithner personally, but to the extent he is handling the public relations aspect of it, we're still unsure as to how the debt ceiling fight is going to play out.

What about the forum with China?

That's another difficult, long-term thing. Some would prefer he play hardball with the Chinese and tell them to let the yuan appreciate against the dollar. But at the same time we're running massive deficits that we need their help in funding, so he has to reassure the Chinese about the debt limit stuff and address their concerns that the U.S. will be able to honor its debt commitments. He's treading a thin line there and you can't really judge it on a short-term basis.

But is there any way to gauge how he's handling the overall relationship? Were the meetings this week strictly a diplomatic formality?

I don't think it was strictly a formality. Geithner needs to get the U.S. message across, which is that China needs to do more in terms of allowing the yuan to appreciate. But at the end of the day it's a bilateral relationship and it's diplomacy, not belligerency, that will get things done with them. But both parties left saying the right things, so on the message front, at least in the short term, this seemed like a success.

I think sometimes Geithner is unfairly lumped in with the Fed when people criticize U.S. economic policy. Does the Treasury have an active role in quantitative easing?

Geithner shouldn't be involved in that and I haven't heard that he is. If Geithner has input there, that says more about Ben Bernanke than it does about Timothy Geithner. So that's right, you can't judge him based on that policy.

What about unemployment? The Treasury is definitely going to be held responsible for the economy's recovery.

I agree. Does the economy need more stimulus? Yes.

And isn't it Geithner's responsibility to sell that to Congress?

And also in terms of what the stimulus has done so far, there's a positive case to be made about the administration's accomplishments. It shouldn't be me telling you that TARP has been a success and that the economy would be a lot worse without the stimulus; the Treasury Department should be making that case and I don't think they've made it forcefully enough.

Geithner's relationship with Wall Street seems like it will always be an issue. Can he change the story on this?

The most effective thing he can do right now is to jawbone. Again, he needs to make the administration's case that in order to reduce the deficit it's going to take tax increases in addition to spending cuts. Given the support the administration provided to Wall Street, it certainly makes sense to look for higher-income people to pay more in taxes.

What strengths does he bring to the job?

He brings a deep institutional knowledge of the Treasury Department and financial markets. His work at the Fed gave him a clear idea of what the problems were and how to get past them.

I think his weakness is that he is not a very effective salesman of the administration's policies.

And that's actually a pretty big weakness, because for the administration to get anything done they need him to be a good salesman.

Absolutely, and that is a big concern. That's part of the Treasury secretary's role: to be the salesman of the administration's economic policy.

Can he turn that around?

In early 2009, there was all of this talk about how he was a disaster and was going to bring down the administration. But I think he was pushing for the correct policies and a lot of that talk has blown over. He was shaky early on and there was some concern about his performance, but I'm more confident having seen him in action lately. I think he's working his way through all of that.