Why the slogan "Vote Republican, End Medicare" opens the party up to unnecessary criticism 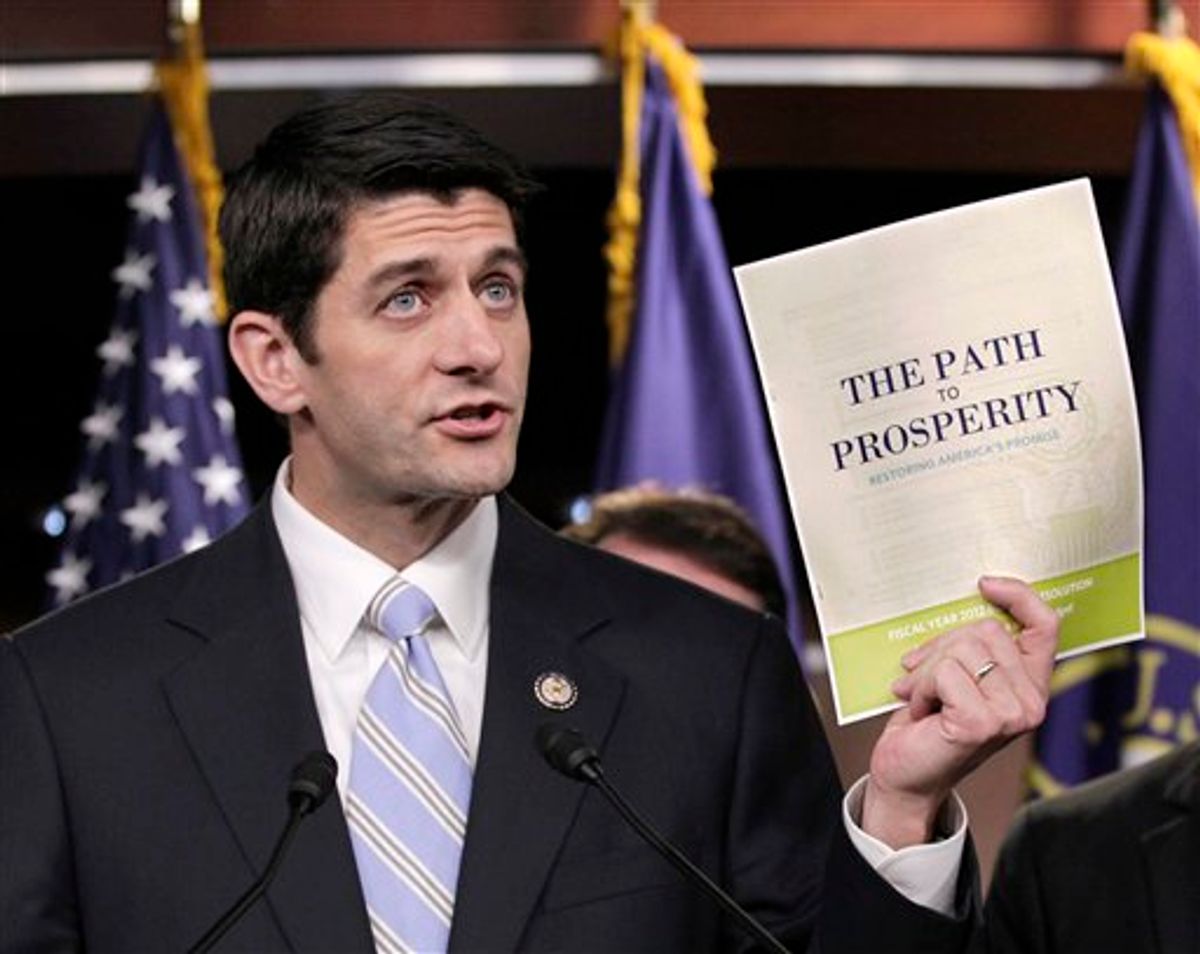 The Democratic Congressional Campaign Committee (DCCC) has already launched political commercials equating voting Republican with voting to end Medicare. One of the ads, which suggests that senior citizens might have to turn to lawn mowing and/or stripping to pay for their medical costs, has comic value at the very least:

The DCCC stepped up Medicare-centric campaigning Monday, launching the Medicare Action Center, DontEndMedicare.com. The website provides information on GOP town hall meetings and a stirring graphic comparing proposed GOP Medicare cuts ($165 million) to the amount of money lost on oil subsidies, offshoring, and tax breaks for the wealthy ($175 billion). You can also print out your very own protest sign, which reads, "Vote Republican, End Medicare."

It's a forceful message. The problem is that it's not quite true. Of course, a more nuanced slogan like, "Vote Republican, precipitate a restructuring of Medicare that would cost seniors a lot more money" would be a less effective rallying cry. However, the DCCC's current Medicare message unnecessarily opens them to criticism.

Paul Ryan's (R-WI) plan would indeed radically restructure Medicare and would require seniors to pay more (considerably more) for their healthcare plans. The DCCC suggests that under the Republican plan, seniors would have to find $12,500 to pay for the health plans, but, Politifact points out, a more appropirate figure for Democrats to highlight would be $6,350:

The CBO [Congreesional Budget Office] estimates beneficiaries would contribute about $6,150 in premiums in 2022 if the program isn’t changed at all. So the extra money seniors need to pay under the Republican proposal is more like $6,350.

And it is worth emphasizing that it is future Medicare beneficiaries, not current participants, who would bare the brunt of Ryan's prpoposals were they to become law. Much of the DCCC's messaging suggests that it is current seniors who will be punished (in the above video, a teenager watches over an elderly man as he mows the lawn; it is the teenager, however, who should be more worried about Republican proposals).

Both Republicans and Democrats would no doubt agree that Ryan’s plan for Medicare is a dramatic change of course. But we don’t agree with the ad’s contention that the proposal ends Medicare. Additionally, images in the ad imply that current seniors will have to go back to work to pay for changes to the program. That’s not true either. It’s actually those 54 and younger who will need extra money.

Ryan's proposal would replace the current Medicare system with a federally subsidized private program. And it will cost seniors a lot of money. As President Barack Obama said, the Republican plan "ends Medicare as we know it." But the "as we know it" is crucial. A Democratic campaign focused on Republicans choosing to end Medicare -- when the Republicans would still maintain a program at least called Medicare -- is just asking to be ripped apart in the war of words that is campaign politics.