Bomb threat in London ahead of queen's Irish visit 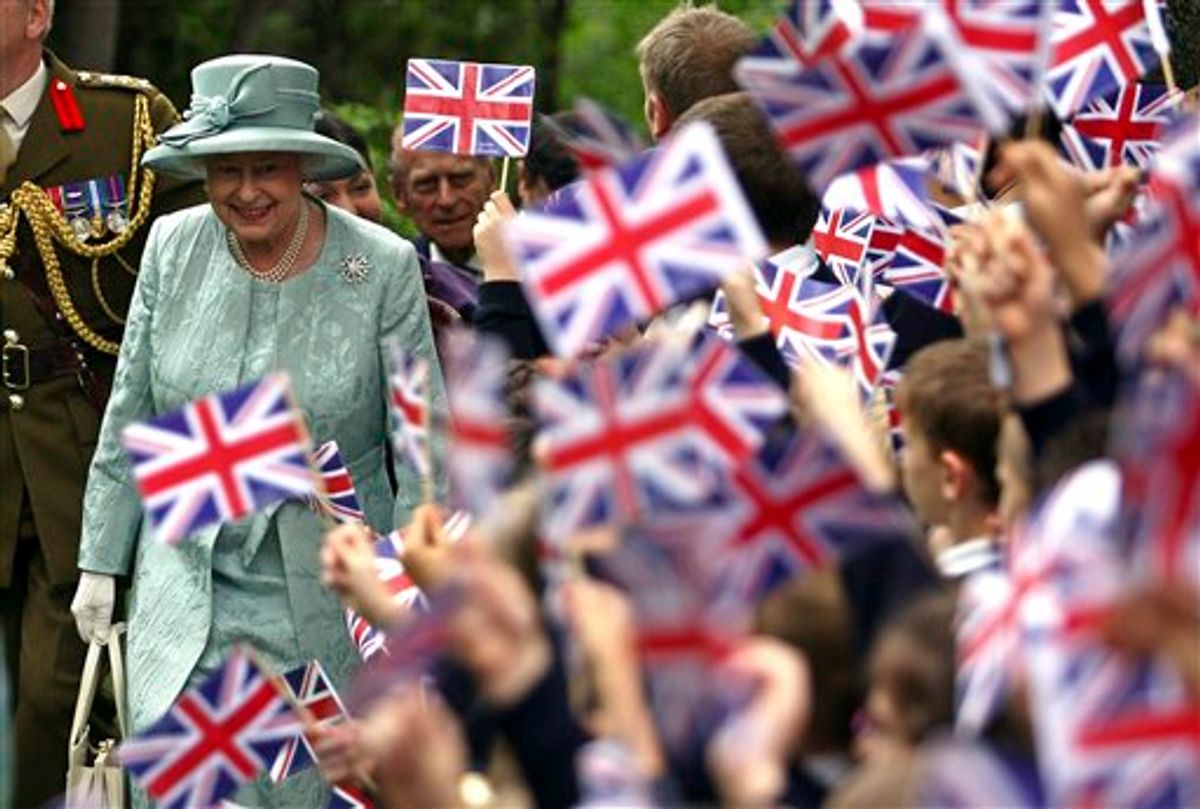 FILE - In this May 16, 2008 file photo, Britain's Queen Elizabeth II, left, is welcomed by children waving Britain's flag, upon her arrival at the British Embassy in Ankara, Turkey. Encouraged by the largely successful peace process in Northern Ireland, which has made her sensitive visit feasible, the queen will become the first British monarch to set foot in the Republic of Ireland on Tuesday, May 17, 2011. When a British sovereign last came, a full century ago, all of Ireland was still part of the United Kingdom. (AP Photo/Firat Yurdakul, Pool) (AP)
--

Encouraged by the largely successful peace process in Northern Ireland, the queen will on Tuesday become the first British monarch to set foot in the Republic of Ireland, where troops and even ground-to-air missiles were being deployed amid tight security.

When a British sovereign last visited, a full century ago, all of Ireland was still part of the United Kingdom.

The monarch's presence is resented by some in Ireland who bristle at the legacy of British rule, with some predicting violent street clashes and others fearing a terrorist attack.

London's Metropolitan Police said the bomb warning -- which was received late on Sunday -- did not include a specific location or time.

Officers were conducting sweeps across the city and closed down to traffic parts of the British capital, including roads near the queen's official residence.

"Londoners should continue to go about their business as usual but we encourage the public to remain vigilant," police said in a statement.

A police official, who spoke on customary condition of anonymity in line with policy, confirmed that the warning related to a threat from a dissident Irish republican group.

The bomb warning was the first serious threat to Britain since 2001, the last time republican dissidents made a successful attack in England, exploding a car bomb near a shopping center in west London, wounding 11 people.

It follow fears that escalating violence in Northern Ireland would spread to Britain, and comes after the government raised the threat level related specifically to Irish terrorism.

"The threat level to Great Britain from Northern Irish- related terrorism remains at substantial, which means that an attack is a strong possibility," the Home Office said in a statement. "There is a continuing need for vigilance and the public should report any suspicious activity to the police."

In Ireland, security for the queen's tour will far exceed measures used for the 1979 visit of Pope John Paul II or for the visits of U.S. President Bill Clinton in the 1990s.

The national police force has canceled all leave and drafted in officers from rural areas, boosting the security detail to 8,500. They also have borrowed two mobile water cannons from Northern Ireland's police.

The queen's four-day trip to Dublin, Kildare, Tipperary and Cork comes as a Catholic-Protestant government in the neighboring British territory of Northern Ireland has just been re-elected, marking another peace milestone.

The Irish Republican Army violence of decades past -- counting among its victims the queen's cousin, Lord Louis Mountbatten, killed when the IRA blew up his yacht in 1979 -- has given way to the group's 2005 renunciation of violence. Only small splinter groups still plot bloodshed across the border.

One of the queen's first actions Tuesday will be to lay a wreath at a Dublin memorial honoring Ireland's rebel dead, a surprisingly direct gesture toward Britain's opponents in the bloody 1919-21 guerrilla war of independence.

The queen's trip will highlight Ireland's many charms, from the Guinness brewery to its Europe-leading horse racing industry, and stunning historical monuments such as the medieval Rock of Cashel. She will be joined by her husband, Prince Philip.

The Irish Defense Forces have deployed ground-to-air missiles at key locations, plan to shut down airspace over Dublin and other locations in tandem with the queen's movements, and are keeping more than 1,000 troops in reserve.

(This version corrects the time element in the first paragraph)