The New York Times reports a culture clash between geeks and fast food critics. Surprised? You should be 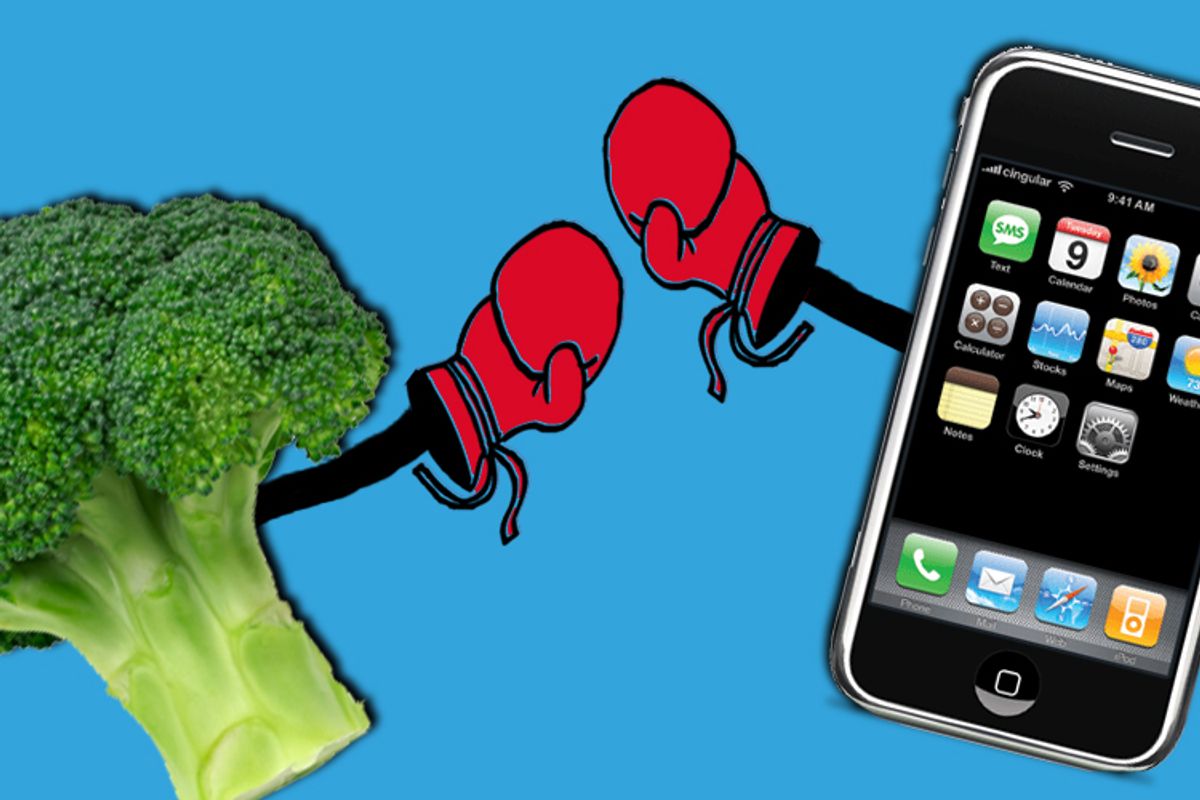 New York Times opinion columnist Virginia Heffernan alerts us today to a "great clash" of civilizations that many of us may not even have realized was occurring: "the clash between foodies and techies."

An intriguing premise! Who knew that there was bad blood between the geeks and the locavores; or that hackers were manning the barricades against the baleful influence of Michael Pollan and Alice Waters? I certainly didn't, and out where I live, in Berkeley, Calif., I find it a challenge to shop for organic scallions without bumping into half a dozen iPhone app writers and  free-range, vegetarian-fed egg connoisseurs. Usually, everyone is very nice to each other, (although, it is true, some of the older hippies can get grouchy when you block them from easy tofu-counter access).

While foodies look back and see the 1950s as the marshmallow-riddled dark ages of American culture, techies see a radiant renaissance. Not only could you get frozen spinach and canned chicken stock at the supermarket, but the first commercial computer appeared. The FORTRAN programming language and artificial intelligence were developed. IBM produced the first dot-matrix printer. To a techie, who cares if some '50s housewives opted to skip the tedium and carpal-tunnel woes of flour-sifting by using yummy Betty Crocker cake mixes? The major turn in postwar American culture was that computers were invented.

The argument, such as it is, seems to be that techies have no problem with labor-saving shortcuts -- microwaved bacon! -- while foodies demand that every meal be a five-course extravanganza freshly prepared from scratch from ingredients grown in your own backyard. I say "seems to be" because Heffernan does a very poor job of defining the term "foodie."

"Foodies complain about Twitter while they make emu-egg cassoulet with creme fraiche," she writes, and are driven "crazy" by "invocations of efficiency and convenience."

The concept of convenience in food preparation is steeply at odds with the idea that all food is sacramental, and eating expensive, rich foods is a devotional act that is somehow also politically progressive.

I would like to believe that Heffernan is purposely trying to be jaw-droppingly provocative here by overstating her argument to get a rise out of knee-jerking malcontents like myself. Because the alternative -- that she actually intends what she says in that paragraph to represent something even vaguely akin to reality -- is just too depressing. Unfortunately, previous experience with Heffernan -- such as her notorious declaration almost exactly a year ago that "white flight" to the iPhone and iPad were causing the (unlamented) "death of the Open Web" -- suggests that we have to take her at face value.

Sure, there is an annoying subset of "foodies" who fetishize the gourmet experience and don't fully appreciate the time constraints that limit what a working parent can put on the table for the kids (or the whopping per-pound cost of fresh salmon). But there's a larger context that Heffernan doesn't even bother to wave her hands at -- the ecological and physiological consequences of a food industry that has taken efficiency and convenience far, far beyond the land of useful tradeoffs out into a dark realm of outright unhealthy dysfunction. Maybe Heffernan doesn't think there's a connection between rising levels of obesity and the kinds of foods most Americans eat today, or that monoculture corn and soybean production are an ongoing ecological disaster, but if you're going to imagine a great cultural clash between "foodies" and "techies" then maybe, just maybe, you should strive to fairly represent the issues that are actually at the heart of meaningful critiques of the status quo.

But even more ridiculous than Heffernan's caricature of "foodies" is the idea that the class of "techies" somehow stand in opposition to the class of people who regard the question of what to eat with some level of seriousness. Speaking as someone whose mother was taking a class in FORTRAN while pregnant with her son, and yet still happens to prefer wild-caught Pacific King salmon to farmed Chilean factory fish, I feel fully overqualified to say fiddlesticks! There is absolutely no contradiction between the premise that advances in technology can improve our life and that we could stand to pay more attention to where our food comes from and how it is "made." Call me crazy, but I believe in rural electrification, washing machines and grass-fed beef. And indeed, the connections between the ideologies of technological liberation and the "foodie" movement" are deeper than one might immediately imagine.

I'm guessing that Heffernan may not have read her New York Times' colleague John Markoff's fascinating tale of how hippie values intersected with technological innovation, "What the Dormouse Said: How the Sixties Counterculture Shaped the Personal Computer Industry." Because if she had, she'd know that the same impulses that inspire the Michael Pollans and Eric Schlossers of the world to reimagine our food system -- the same passion that finds nirvana in an heirloom tomato -- was also present in the hearts and minds of the visionaries who saw the personal computer and Internet as tools for human enlightenment.

Some of those hippies became Silicon Valley moguls, while some started organic farms in Sonoma County -- but to this day, those value systems still merge. Since when do foodies complain about Twitter? The foodies I know are swapping recipes in a world of food blogs that offers more would-be cooks more access to information about ingredients, cooking techniques, and quick 20-minutes-of-prep dinner meals than has ever before been possible in the history of humanity on this planet. The foodies I know can use the Web to tweak the contents of the farm box full of fresh vegetables and fruits that is delivered to their front door every week! The foodies I know are quick to head to Twitter to spread the news of the latest delicious recipe or stupid column.

The foodies I know believe in progress. They believe that we can do better, that our children can grow up healthier, our environmental impact can be more sustainable, and our diets can be less controlled by the chemists who work for giant agribusiness multinationals. And they know that the communication technologies of today are awesome tools to help achieve those goals.

All hail the techie-foodie harmonic convergence! Maybe you don't like broccoli. But I guarantee you that a little elbow grease applied to your iPhone will usher you into a magical world of broccoli wonder. It's easy. Try it. You might like it.

Food Fights How The World Works The New York Times