Newt Gingrich will never be president

How many racially divisive images and issues can he throw at us in just one week? Keep watching 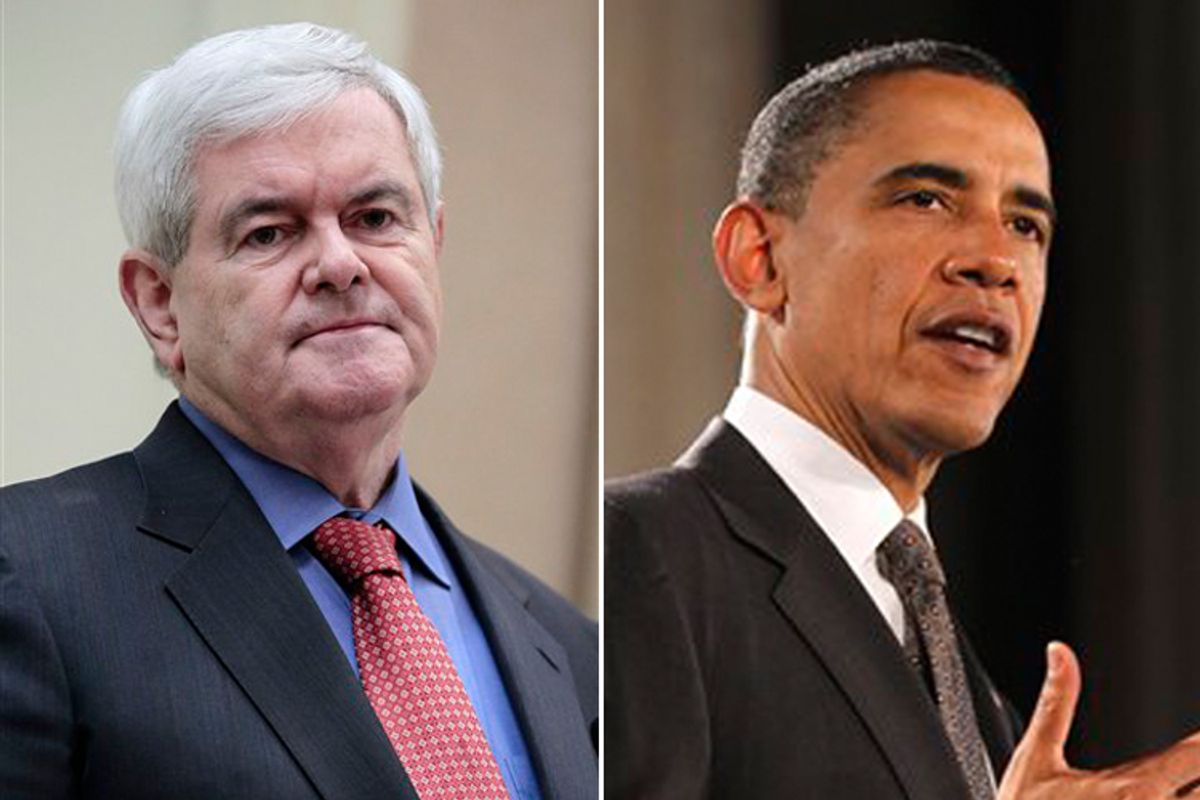 It's beginning to look like when Haley Barbour shuffled off into the Mississippi sunset, saying he just couldn't commit to a 10-year presidential crusade, he left his draft campaign playbook sitting on a garbage can, and Newt Gingrich picked it up. Barbour, you'll recall, was trying out a new approach to race in the Obama era: Jim Crow wasn't "that bad," the white-supremacist White Citizens Councils kept down the KKK, and nobody could make him denounce an effort by the Sons of Confederate Veterans to dedicate a license plate to KKK founder Nathan Bedford Forrest, either. "I don't go around denouncing people," declared the man who denounced Democrat Ronnie Musgrove for efforts to remove the Confederate flag from Mississippi's state flag. I said at the time that Barbour was trying out the notion that post-Obama, people -- particularly white people leaning Republican -- are ready for an approach that says let's quit all this whining about racism, it wasn't that bad, it's time to get back to the business of cutting taxes for the rich and programs for the poor.

Well, Newt Gingrich seems to have wandered by the garbage can to pick up Barbour's draft playbook, and it's all unfolding as planned. He's getting hit for calling President Obama "the food stamp president"; even David Gregory heard the racial imagery in the term, given the way Republicans have long loved to associate welfare programs with black people. Ronald Reagan famously railed against Cadillac-driving "welfare queens" and "strapping young bucks" buying "T-bone steaks" with food stamps; Barbour actually praised Head Start, because some of the kids in it "would be better off sitting up on a piano bench at a whorehouse than where they are now." I called Gingrich's remarks "coded racism" yesterday, and today right-wingers were up in arms, pointing out that most food stamp recipients are white. This is absolutely true of most welfare programs, which is why the GOP association of welfare with black people has always seemed, well, racist.

But let me be clear: I might not have paid attention to Gingrich's "food stamp president" jibe had it not come along with a panorama of images designed to make clear Barack Obama is blackity black black. Praising right-wing Texas Gov. Rick Perry, Gingrich said he'll make the U.S. more like Texas, while Obama only "knows how to get the whole country to resemble Detroit." In the speech to Georgia Republicans where he tried out the "food stamp president" slur, Gingrich also told the bastion of the old Confederacy that 2012 would be the biggest election since 1860 -- you know, when Abraham Lincoln got elected and the South began to secede over slavery, commencing the Civil War. He also suggested the U.S. might need to bring back some kind of voting test, banned under the Voting Rights Act. Last year, of course, Gingrich denounced Obama's "Kenyan anti-colonialist behavior," which made him "outside our comprehension" as Americans, spreading the lie that Obama inherited angry African anti-colonialism from his absent African father, though he was raised by his white mother and grandparents. Oh, and he headed the drive to label Supreme Court Justice Sonia Sotomayor "racist" when she was nominated in 2009.

So let's review: Welfare slur? Check. Tie to a troubled, mainly black city? Check. Specious association with African anti-colonialism? Check. Dire reference to Lincoln and the start of the Civil War, while campaigning deep in the heart of Dixie? Check. Suggestion we need a voter test? Check. Oh, and for good measure, calling liberals concerned about racial injustice "racist"? Check. Awesome: They've hit pretty much every way the GOP has used to divide Americans by race in the last 200 years!

Great job, Newt. You've developed the perfect platform to run a spirited GOP campaign that attracts a cadre of aggrieved white people. You'll never be president of the United States, but you'll be the champion of the declining share of the country that still thrills to what we used to call dog-whistle politics: coded varieties of racism only understood by their intended audience. And all the efforts by Gingrich defenders to claim I'm the racist are just funny. One of Andrew Breitbart's minions is leading the charge, and he lamented Monday morning on Twitter: "Would prefer to hammer Newt today over throwing Ryan under the bus, but @joanwalsh, @davidgregory, & @ebertchicago had to go & do this." (Roger Ebert was kind enough to Tweet my Sunday Gingrich story.)

I'd advise the Breitbart gang to get back to hammering Gingrich over Paul Ryan's politically suicidal budget plan; they should focus on the shard of people who want to debate whether Gingrich or Ryan is the leader who can lead their party off a cliff. Anyway, they've mistaken me for someone who cares what they have to say. Gingrich is doubling down on racial politics, and I'm going to continue to call it out when I see it.

Oh, and this is one in an occasional series of pieces on folks who will never be president, which began when Sarah Palin unraveled over the Gabrielle Giffords shooting. I didn't get to Barbour or Mike Huckabee; they realized they would never be president all on their own. It seems silly to write the same piece on Donald Trump; it's like saying "pigs will never fly." But I'm sure there will be a few more to come.